By their own reckoning, Latinos1 living in the United States do not have a national leader. When asked in an open-ended question to name the person they consider “the most important Latino leader in the country today,” nearly two-thirds (64%) of Hispanic respondents said they did not know. An additional 10% said “no one.” 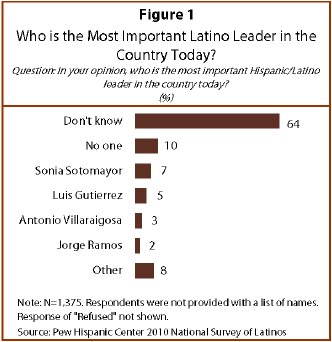 These findings emerge from the 2010 National Survey of Latinos, a bilingual national survey of 1,375 Hispanic adults conducted prior to this month’s mid-term elections by the Pew Hispanic Center, a project of the Pew Research Center.

The most frequently named individual was Sonia Sotomayor, appointed last year to the U.S. Supreme Court. Some 7% of respondents said she is the most important Latino leader in the country. U.S. Rep. Luis Gutierrez (D-Ill.) of Chicago is next at 5%. Los Angeles Mayor Antonio Villaraigosa draws 3%, and Jorge Ramos, an anchor on Noticiero Univision, the national evening news program on the Spanish-language television network Univision, drew 2%.

No one else was named by more than 1% of respondents in the 2010 National Survey of Latinos conducted August 17 through September 19, 2010, by landline and cellular telephone. The margin of error for the full sample is plus or minus 3.3 percentage points at the 95% confidence level. For a full description of the survey methodology, see Appendix A.

The prominence of these offices conceivably could provide platforms from which any of the three could emerge as national Latino leaders, but to do so they would have to overcome some strong partisan head winds. Nationwide, Latinos supported Democratic candidates for the U.S. House this month by a wide margin, according to the National Election Pool’s national exit poll—continuing a pattern of strong Latino support for Democrats that has persisted in recent elections (Lopez, 2010).

At 47 million strong, Latinos are the nation’s largest minority group, constituting more than 15% of the U.S. population. As a group, they feel increasingly targeted by ethnic bias. More than six-in-ten (61%) say that discrimination against Latinos is “a major problem” that prevents members of their ethnic group from succeeding in America (Lopez, Morin and Taylor, 2010), up from 47% who felt this way in 2002 (Pew Hispanic Center, 2002).2

At various times in American history, groups that have felt aggrieved have rallied behind leaders who championed their cause—be it a Susan B. Anthony, who led the women’s suffrage movement in the late 19th century, or a Rev. Martin Luther King, Jr., who led the civil rights movement in the mid 20th century. From the 1960s through the 1980s, Cesar Chavez, co-founder of the United Farm Workers of America (UFW), played a similar role for Latinos, who at the time were a much smaller share of the U.S. population than they are now.

But there are often times when groups—be they ethnic, racial or political—do not have easily identifiable leaders. For example, in a national survey conducted after this month’s mid-term elections, when Republicans were asked who they think of as the leader of the Republican Party these days, 45% said they don’t know and 13% said that “nobody” leads the party (Pew Research Center for the People & the Press, 2010).

Today, not only are most Latinos unable to name anyone they consider a national leader, but many see divisions within the Latino community between the native-born and foreign-born. About half (45%) say they believe that immigrant Latinos and native-born Latinos are working together to achieve common political goals, but a nearly identical share (46%) say they do not believe these two groups are working together (Lopez, Morin and Taylor, 2010). Both the native born3 (who comprise 47% of the adult population of Latinos) and the foreign born (who comprise 53%) are also roughly equally divided on this question.

Names of Leaders Tested in the Survey

Sonia Sotomayor is an Associate Justice of the Supreme Court of the United States.

Jorge Ramos is an anchor on Univision’s Noticiero Univision, a national evening news show.
Antonio Villaraigosa is the mayor of Los Angeles, Calif.

Dolores Huerta is co-founder of the United Farm Workers of America.

Bill Richardson is the governor of the state of New Mexico.

Janet Murguía is the President and Chief Executive Officer of the National Council of La Raza (NCLR), a Hispanic civil rights and advocacy organization.

The survey explored the subject of leadership in the Latino community in two different ways. The first was to present an open-ended question in which respondents were asked: “In your opinion, who is the most important Latino leader in the country today?” As reported above, nearly two-thirds said they did not know, and an additional one-in-ten said “no one.”

Later in the survey, respondents were presented with the names of eight prominent Latinos and asked if they had heard of each. Those who said they had were then asked if they considered that person to be a leader. (The sample was split in half so that each respondent was asked about four prominent individuals).

Of the eight names presented (see box), just two were familiar to a majority of respondents: Sotomayor (67%) and Ramos (59%). Four others were known by more than a quarter of respondents: Villaraigosa (44%), Gutierrez (38%), New Mexico Governor Bill Richardson (35%), and UFW co-founder Dolores Huerta (28%). The other two were familiar to only a small share of respondents: U.S. Rep. Raúl Grijalva (D-AZ) of Tucson, Arizona (13%), and Janet Murguía, President and Chief Executive Officer of the National Council of La Raza (8%). 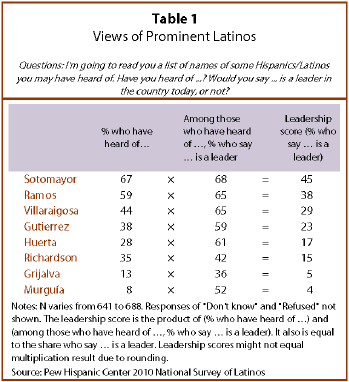 In the follow-up question, anywhere between one-third and two-thirds of respondents who had heard of each prominent Latino said that they considered that person to be a leader. The highest leadership “score” was received by Sotomayor. Among the 67% who said they had heard of her, some 68% said they consider her to be a leader—meaning that, when the questions are posed in this manner, a total of 45% of survey respondents (67% × 68%) consider her a leader.

Ramos is next with a leadership score of 38%, followed by Villaraigosa at 29% and Gutierrez at 23%. No one else on the list had a score above 20%. 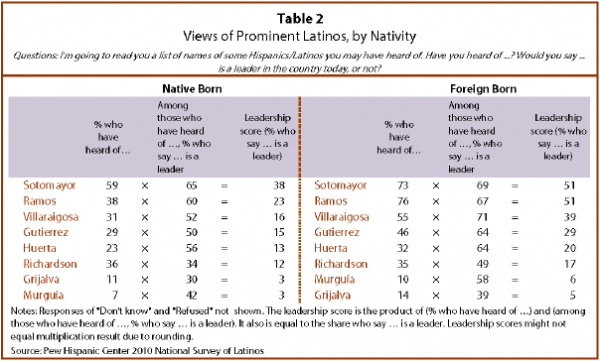 Among English-dominant Latinos, Sotomayor achieved the highest leadership score (32%), followed by Richardson (15%), Villaraigosa (13%) and Gutierrez (10%). Among bilingual Latinos, Sotomayor once again has the highest leadership score—45%. She is followed by Ramos (39%), Villaraigosa (26%) and Huerta (19%).

Next: Appendix A: 2010 National Survey of Latinos Survey Methodology
← Prev Page
You are reading page1Page2Page3
Next Page →

Three-Fourths of Hispanics Say Their Community Needs a Leader
Hispanic Identity Fades Across Generations as Immigrant Connections Fall Away
Hispanics and the New Administration
When Labels Don’t Fit: Hispanics and Their Views of Identity
Illegal Immigration Backlash Worries, Divides Latinos
Quiz: Are you a Core Conservative? A Solid Liberal? Or somewhere in between?
More Americans now say academic concerns should be a top factor in deciding to reopen K-12 schools
Defining generations: Where Millennials end and Generation Z begins
How the Coronavirus Outbreak Has – and Hasn’t – Changed the Way Americans Work
Views on Race in America