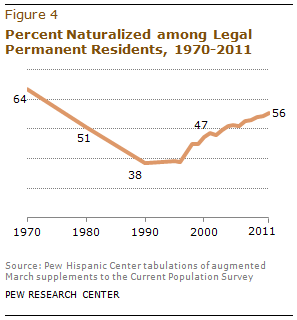 According to Pew Hispanic Center estimates, the share of all legal foreign-born residents who have become naturalized U.S. citizens rose to 56% in 2011, the highest level in three decades and an 18 percentage point increase since 1990.

U.S. citizenship confers a number of benefits on recipients. In addition to the right to vote, naturalized immigrants are eligible to participate in federal programs, gain a number of legal rights and become eligible for federal employment. 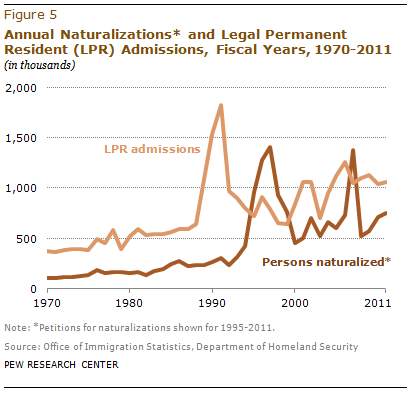 The population of naturalized U.S. citizens reached 15.5 million in 2011, a historic high that reflects both a rise in the annual inflow of legal migrants and an increased likelihood that those who are eligible to apply for citizenship actually do so.

The number of legal permanent resident admissions has exceeded5 1 million annually since 2005, about double the annual number of immigrants admitted legally and granted green cards in the 1970s and 1980s (U.S. Department of Homeland Security, 2012). 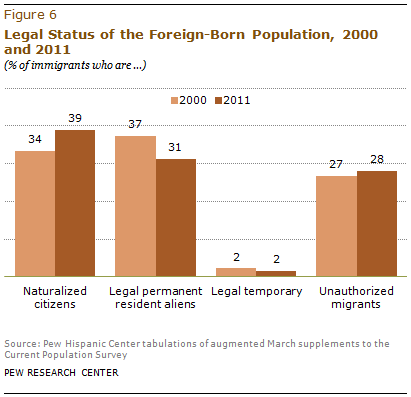 As a result, the total number of legal immigrants—naturalized U.S. citizens and legal permanent residents—has more than doubled in the past four decades, reaching 27.8 million in 2011. This has created a large pool of potential new U.S. citizens. In 2011, a majority (56%) of all the legal immigrants living in the country had already become naturalized citizens. The rest—12.4 million—are green card holders who could eventually naturalize and become U.S. citizens. 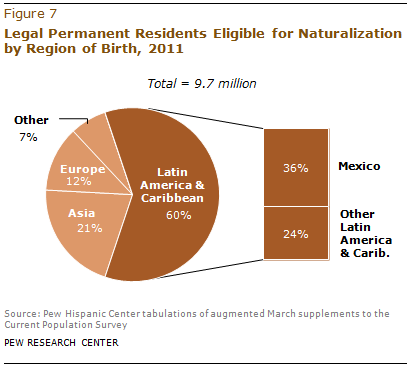 As of 2011, 9.7 million immigrants were eligible for naturalization but had not yet naturalized; of these, more than a third (3.5 million) were Mexican immigrants.

After a sharp increase in naturalizations of Mexican legal permanent residents in the late 1990s (Passel, 2007), the Mexican naturalization rate has flattened. 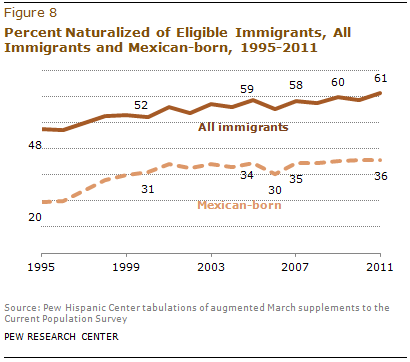 In 2011, Mexicans still had a comparatively lower rate of naturalization at 36% than the 61% for all immigrants and 68% for all non-Mexican immigrants (see Appendix A).

Compared with other immigrants from Latin America and the Caribbean, Mexicans also have the lowest rate of naturalization—36% versus 61% in 2011 (see Appendix A).6

There are several possible explanations for these differences. Most importantly, Mexican immigrants are more likely than others to maintain close ties to their home country because of the geographic proximity of Mexico to the U.S.

Another possible reason is that not all Mexican immigrants are aware that they can hold both U.S. and Mexican citizenship at the same time. Until 1998 Mexico did not allow its citizens to hold dual citizenship. The change in policy by the Mexican government is one reason the rate of naturalization of Mexican immigrants in the U.S. rose so dramatically in the late 1990s, from 20% in 1995 to 34% in 2001.

The Pew Hispanic survey asked all foreign-born Latinos whether or not their country of origin allowed them to hold citizenship from another country. Among Mexican immigrants, 71% correctly responded that Mexico allows its citizens to hold dual citizenship. But 18% said that Mexico does not allow dual citizenship and an additional 11% said they don’t know. Among non-Mexican Latino immigrants, 62% said their country of origin allows them to hold two citizenships, while 24% said it does not and 14% said they don’t know.7 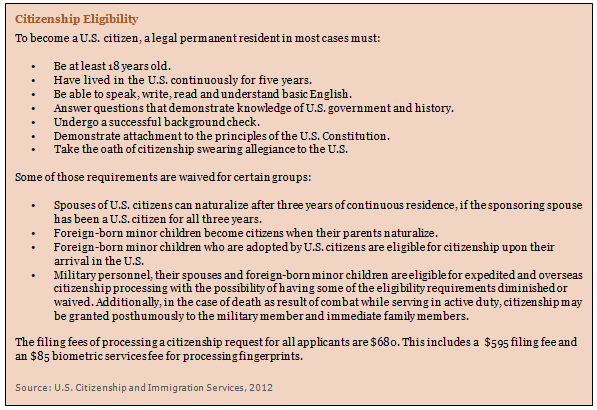 Next: III. Who Naturalizes: Reasons for Naturalizing
← Prev Page
Page1You are reading page2Page3Page4Page5Page6Page7Page8
Next Page →