In mid-June 2012, President Barack Obama announced a new program that would shield young unauthorized immigrants from deportation and allow them to apply for temporary but renewable work permits. The program, known as Deferred Action for Childhood Arrivals, provides relief from deportation unauthorized immigrants younger than 30 who were brought into the country as children and who are currently enrolled in school or have obtained a high school diploma or GED.11

According to Pew Hispanic Center estimates, up to 1.7 million unauthorized youth could potentially qualify for this program (Passel and Lopez, 2012), with about 85% of potential beneficiaries being of Hispanic origin. After the first 43 days of the program, the U.S. Department of Homeland Security reported that it had received more than 100,000 applications, with most in the last stages of review and 29 confirmed approvals (Preston, 2012). 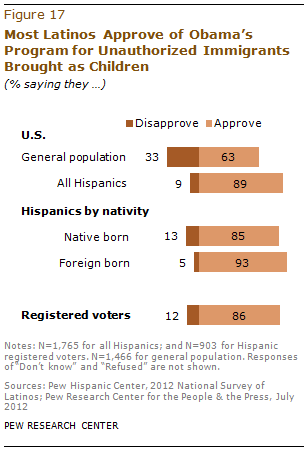 According to the Pew Hispanic survey, fully 89% of all Latinos—and 86% of Latino registered voters—say they approve of this new immigration program. A majority (63%) of the general public also approves of the new deferred action program, though the share that does so is notably lower than it is among Latinos.12 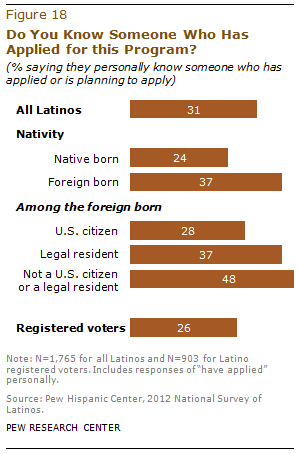 Hispanics who are foreign born are more likely than those who are native born to say they personally know someone who has applied for the program or is planning to—37% versus 24%.

Among the foreign born, those who do not hold U.S. citizenship and are not legal permanent residents are most likely to say they know someone who has applied or is planning to. Almost half (48%) of those who are neither citizens nor residents say they know someone in these circumstances, compared with 37% of foreign-born Latinos who are legal residents and 28% of foreign-born naturalized Latinos. 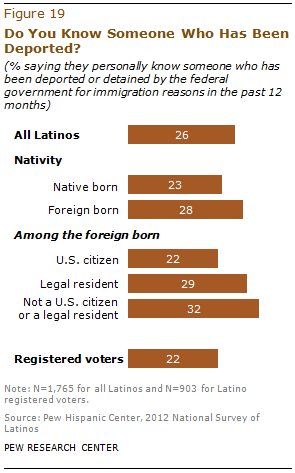 Next: References
← Prev Page
Page1Page2Page3Page4Page5You are reading page6Page7Page8Page9
Next Page →