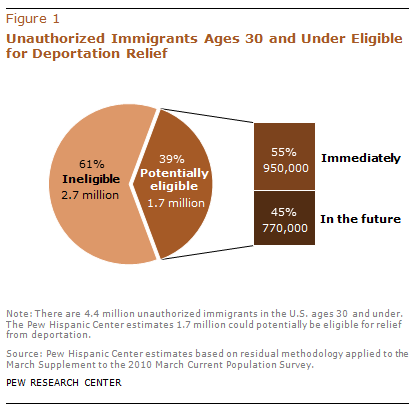 Up to 1.7 million of the 4.4 million unauthorized immigrants ages 30 and under could potentially qualify for a new Obama administration program that goes into effect tomorrow that would shield them from deportation and enable them to apply for temporary but renewable work permits, according to new estimates from the Pew Hispanic Center, a project of the Pew Research Center.

Announced on June 15, 2012, by U.S. Department of Homeland Security (DHS) Secretary Janet Napolitano, the new program, known as “Deferred Action for Childhood Arrivals,” potentially provides relief from deportation for eligible unauthorized immigrants who are ages 30 and under and arrived in the U.S. before age 16.

The new Pew Hispanic Center estimate of 1.7 million potential beneficiaries is an increase over the estimated 1.4 million potentially eligible unauthorized immigrants reported by the Pew Hispanic Center (2012) in June, when DHS announced the new policy. Since then, DHS (2012) has provided more detail on program eligibility, publishing updated guidelines on August 3, 2012. As a result, the Pew Hispanic Center estimates that as many as 320,000 more unauthorized immigrants may be eventually eligible for relief from deportation. These additional potential beneficiaries are unauthorized immigrants ages 16 to 30 who came to the U.S. as children, currently do not have a high school diploma and are not enrolled in school. According to the updated eligibility guidelines, if these young people enroll in school by the date of their application, they could become eligible for relief from deportation.1

On August 3, 2012, DHS published updated eligibility guidelines for the Deferred Action for Childhood Arrivals program. According to the updated guidelines (U.S. Citizenship and Immigration Services, 2012), unauthorized immigrants ages 15 to 30 who arrived in the U.S. before age 16 may qualify for deferred action if:

Unauthorized immigrants who meet these criteria may apply for a deferred action permit that shields them from deportation for two years and also may potentially qualify them for work authorization.2 At the expiration of the two-year deferred action period, program beneficiaries can apply for a two-year renewal, pending a review of their case. According to DHS, renewals will be issued in two-year increments. Unauthorized immigrants who are currently in removal proceedings or have a removal order also may apply for deferred action if they meet the eligibility guidelines set by DHS.

As DHS has noted, this new program does not provide a path to permanent residence status or citizenship. Also, immediate relatives or dependents of potential beneficiaries cannot be considered for deferred action.

The Department of Homeland Security, through U.S. Citizenship and Immigration Services (USCIS), will begin accepting applications from unauthorized immigrants ages 15 to 30 on August 15, 2012. According to USCIS, each deferred action request will be evaluated on a case-by-case basis. A $465 application fee applies to each request and includes fees for the deferred action permit and fees for a temporary work authorization permit.

How Many Potentially Eligible Now 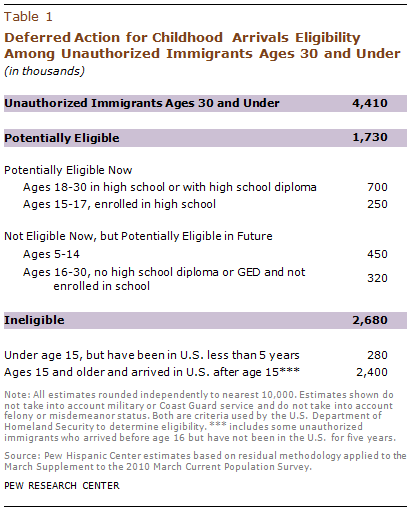 The Pew Hispanic estimates shown in this report do not take into account young unauthorized immigrants who may be potential beneficiaries through military or Coast Guard service rather than educational attainment—likely to a small number of potential beneficiaries. Honorably discharged veterans who meet age and residency criteria qualify to take part in the deferred action program.

The Pew Hispanic estimates also do not take into account felony or misdemeanor status. Those who have been convicted of a felony, a significant misdemeanor or three or more misdemeanors are not eligible to participate in the deferred action program.

How Many Not Eligible Now, But May Be in the Future

Applying the updated eligibility guidelines recently published by DHS (U.S. Citizenship and Immigration Services, 2012), the Pew Hispanic analysis finds that there are 770,000 young unauthorized immigrants who are not currently eligible for deferred action, but may become eligible in the future. This includes 450,000 unauthorized immigrants under age 15 who are currently enrolled in school and have been in the U.S. continuously for at least five years. They would eventually age into program eligibility.

As noted earlier, an additional 320,000 unauthorized immigrants ages 16 to 30 who arrived in the U.S. as children and have been continuously in the U.S. for at least five years, but do not have a high school diploma or GED, could be eligible. Unauthorized immigrants in this group would become potentially eligible if they enrolled in school before applying for deferred deportation action. School enrollment is a key condition of DHS’ updated eligibility guidelines.

Not all unauthorized immigrants ages 30 and under are eligible for deferred deportation action under the new program. According to the Pew Hispanic analysis, some 2.4 million meet the age requirements of the administration’s program but arrived in the U.S. after age 15 or have been here less than five years, making them ineligible. An additional 280,000 unauthorized immigrants who are under age 15 are also not eligible for the deferred action policy since they have not been in the U.S. for five years or more, the cutoff residency requirement of the program.

This report focuses on the unauthorized immigrant population that arrived in the United States before age 16 and is under the age of 31. The Pew Hispanic Center estimates the unauthorized immigrant population using the “residual method,” a well-developed and widely accepted technique that is based on official government data. For more details, see “Unauthorized Immigrant Population: National and State Trends, 2010” by Jeffrey Passel and D’Vera Cohn (2011).

In this report, data come mainly from the March 2010 Current Population Survey (CPS), conducted jointly by the U.S. Bureau of Labor Statistics and the Census Bureau. It is best known as the source for monthly unemployment statistics. Each March, the CPS sample size and questionnaire are expanded to produce additional data on the foreign-born population and other topics. The Pew Hispanic Center assigns legal status to individual cases in the CPS to agree with the residual estimates and makes further adjustments to the government data to compensate for undercounting of some groups. Therefore the population totals differ somewhat from the ones the government uses. Estimates presented in this report are based on cases assigned as unauthorized who met age, education and duration of residence criteria outlined by the U.S. Department of Homeland Security for its “Deferred Action for Childhood Arrivals” program.

Throughout this report, the term “unauthorized immigrant” refers to immigrants who are in the United States illegally.

Marcelli, Enrico A. and Paul M. Ong. 2002. “2000 Census Coverage of Foreign-Born Mexicans in Los Angeles County: Implications for Demographic Analysis.” Paper presented at the 2002 annual meeting of the Population Association of America, Atlanta, GA, May.