Since the start of the economic recovery in 2009, employment is up and unemployment is down for all groups of workers. But progress overall has been slow, and the growth in jobs has barely kept up with the growth in the working-age population for most groups. As a result, the employment rate—the share of the working-age population with jobs—has not improved by much in the recovery for any group. Declines in unemployment rates have also been modest and driven in part by ongoing withdrawals of people from job-seeking activities.

Although employment trends are moving in the same direction for all groups, the speed varies across groups. Hispanics and Asians are gaining jobs at a faster rate than blacks and whites, foreign-born workers are outpacing native-born workers, and men are faring better than women in the recovery. With the exception of trends by gender, the differences in jobs growth reflect differences in population growth—groups whose populations are growing faster than average are experiencing more rapid employment gains.

Trends in Employment and Unemployment 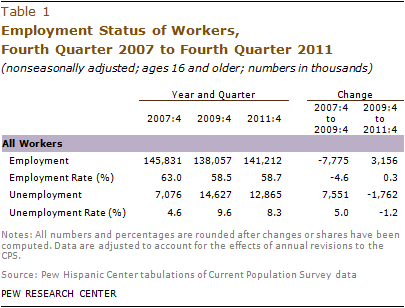 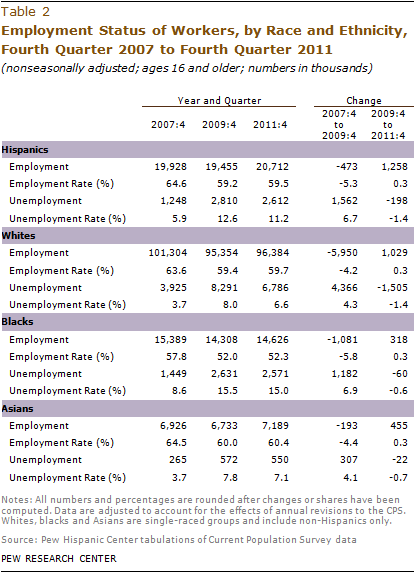 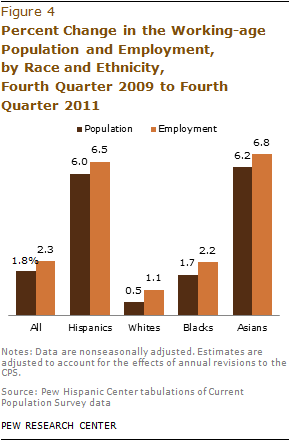 At least part of the drop in unemployment rates is due to ongoing declines in labor market activity by people 16 and older. Factors that may cause people to leave the labor market, temporarily or for good, include being discouraged over job prospects, childbirth, illness or disability, and retirement. People who exit the labor market are not counted among the unemployed and if more people choose that path the unemployment rate can drop even if there has been no growth in employment. 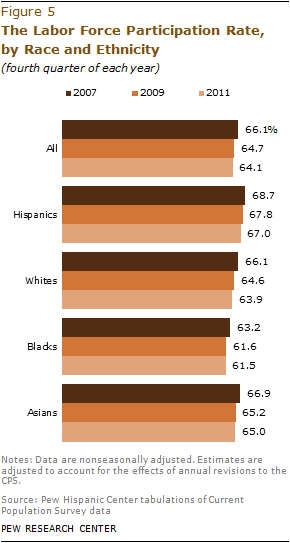 Among whites, the labor force participation rate decreased from 64.6% in the fourth quarter of 2009 to 63.9% in the fourth quarter of 2011. In addition to the lingering economic disincentives arising from the recession, the aging of the baby boomers is a significant force reducing the number of whites in the labor force. Labor force participation rates for blacks and Asians fell only slightly in the recovery. 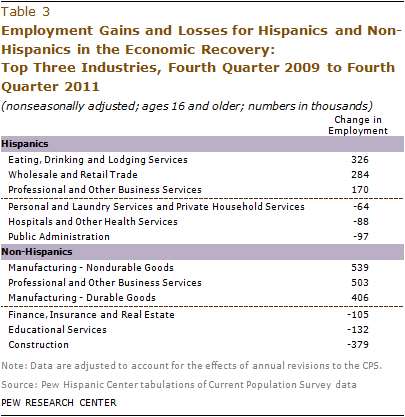 Industries that shed jobs during the recovery for Hispanics include public administration (97,000), hospitals and other health services (88,000) and personal and private household services (64,000). For non-Hispanics, the leading sources of job losses in the recovery were construction (379,000), educational services (132,000) and finance, insurance and real estate services (105,000).11

Next: III. The Economic Recovery for Native-born and Foreign-born Workers
← Prev Page
Page1You are reading page2Page3Page4Page5Page6Page7
Next Page →