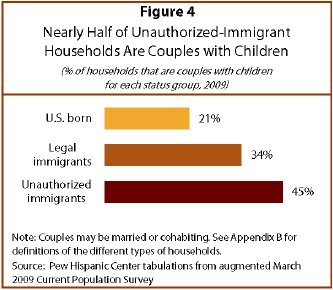 Unauthorized immigrants are much more likely than either legal immigrants or native-born adults to live in a household with a spouse and a child or children.

According to Pew Hispanic estimates, some 45% of unauthorized immigrants live with a spouse (or cohabiting partner) and child or children, compared with 34% of legal immigrant adults and 21% of U.S.-born adults. Here again, the chief reasons are that unauthorized immigrants tend to be younger and have higher rates of fertility than other adults.

One byproduct of these demographic patterns is that a substantial share of the undocumented population of this country lives in a so-called mixed-status family—that is, a family with at least one unauthorized immigrant parent and at least one U.S. citizen child.