The Native Born Use Mobile Technologies More than the Foreign Born 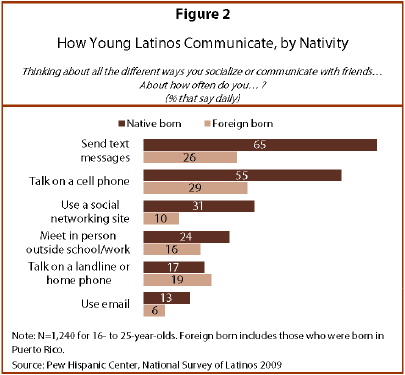 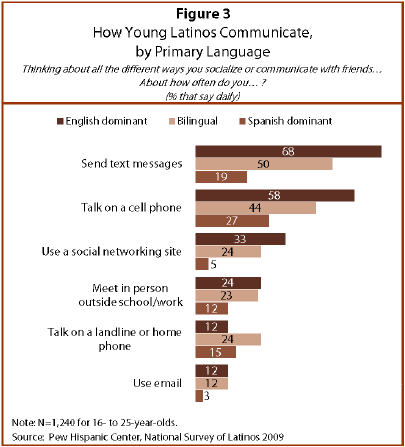 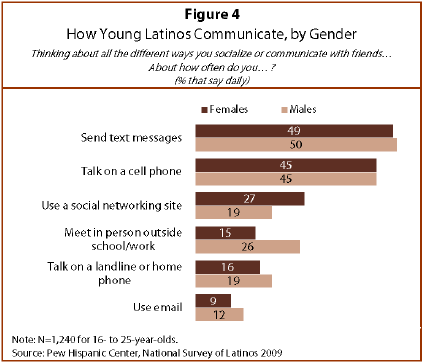 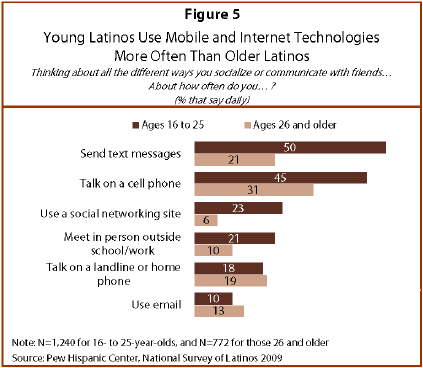 Latino youths ages 16 to 25 are more likely than Latinos ages 26 and older to use texting and cell phones to communicate and socialize with their friends. The age difference is particularly stark for texting, with only 21% of older Latinos saying they text friends on a daily basis, compared with half (50%) of Latino youths. Even with the rapid proliferation of cell phones, age differences in daily use remain notable; 45% of Latino youth report talking on a cell phone daily with their friends, compared with 31% of older Latinos.

Also, young Latinos are almost four times as likely as older Latinos to reach out to friends using social networking sites—23% versus 6%.

By contrast, Latino youths and older Latinos are equally likely to send emails daily to friends—about one-in-ten of each group do so.

When it comes to more traditional forms of socializing and communicating, young Latinos, and those ages 26 and older are similar in terms of the use of a landline or home phone. Some 18% of youths use a landline or home phone daily, as do 19% of Latinos ages 26 and older. However, youths are more than twice as likely to report that they socialize in person with their friends daily. While one-in-ten (10%) Latinos 26 and older do so, this share rises to 21% among Latinos ages 16 to 25.