Hispanics are not only the largest minority population in the United States, they are also the youngest. Consequently, they account for especially large shares of the young adult and child populations in the U.S. While growth in the Latino population in the recent past has been driven by the flow of immigrants (the first generation), the children of those immigrants now account for the plurality of the Latino youth population. This trend is projected to intensify in the coming years as the first-generation share continues to shrink and the second and higher generations of Latino youths come to the forefront.

Persons who self-identify as being of Mexican origin account for about two-thirds of the Latino youth population in all generations. In terms of family heritage, the most notable difference across the generations is that relatively more youths in the first generation trace their origin to Central and South American countries and relatively fewer are of Puerto Rican or other Spanish origins.

Hispanics, by a wide margin, are the youngest of the major racial and ethnic groups. Their median age (27) makes them younger than blacks (31), Asians and Native Hawaiian and Pacific Islanders (36) and whites (41).

However, the age structure of the second generation of Latinos shows a striking concentration at the bottom. The median age of this generation is only 14, indicating that almost half of this population has yet to enter the teenage years. Some 37.5% of the Latino second generation is younger than 10.

The third generation of Hispanics is older than the second generation but, with a median age of 20, still relatively young. The relative concentration at the bottom of the distribution—29.0% are younger than 10—most likely reflects the growing presence of the grandchildren of the modern wave of Latino immigrants. 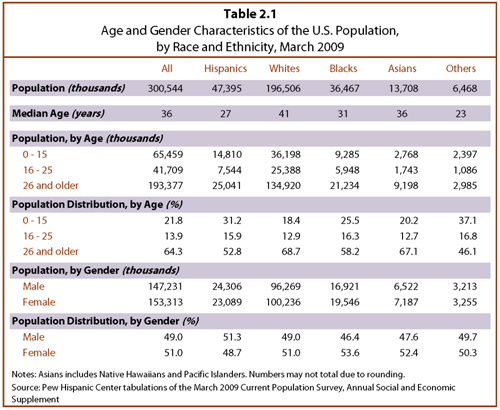 There is another key demographic difference between Latinos and other groups: Latinos are the only majority male population. Among Latinos, males had a 51.3% share of the population. The share of males in the overall population is 49.0%. This divergence may be attributed to the relative youth and foreign-born status of the Hispanic population.5 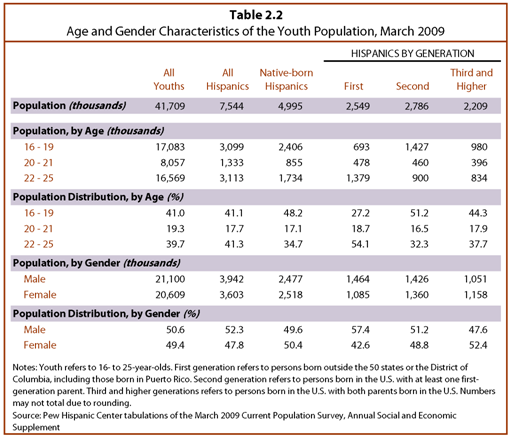 With regard to gender, a sizable majority (57.4%) of foreign-born Latino youths are male. That is much higher than the male share in the second generation of Hispanic youths (51.2%) or third and higher generations of Hispanic youths (47.6%). The relatively high share of males in the foreign-born Latino young adult population reflects the fact that in many cases, male immigrants come first, followed by their families.

Countries of Origin of Hispanic Youths

More than two-thirds of Hispanic youths, regardless of nativity or generation, self-identify as being of Mexican origin.6 That share is similar to how all Hispanics in the U.S. identify their origin. There is, however, one notable difference across generations of Hispanic youths. The share of youths who identify Central or South America as their origin increases sharply from the third and higher generations (3.9%) to the second generation (18.3%) and then to the first generation (23.8%). 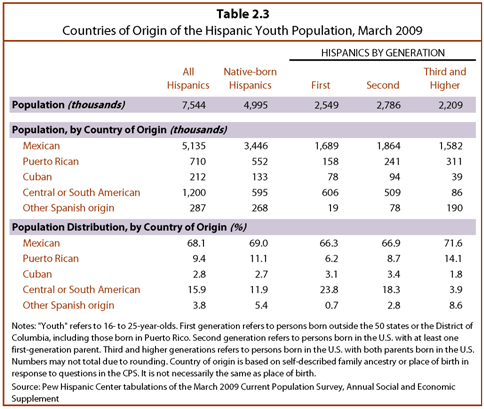 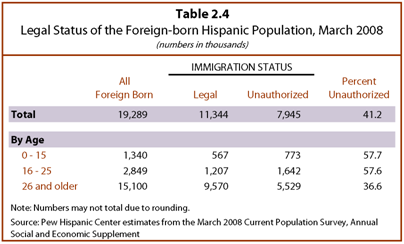 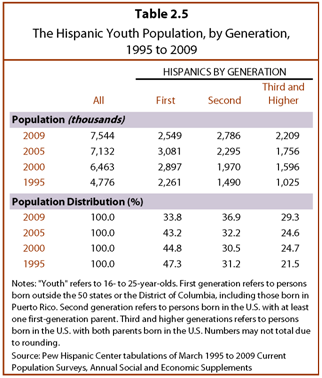 The second generation of Latino youths—the children of immigrants—outnumbers the other generations. In March 2009, there were 2.8 million second-generation Hispanic youths, followed by 2.5 million first-generation (foreign-born) youths and 2.2 million third and higher generations of youths (see Table 2.2). 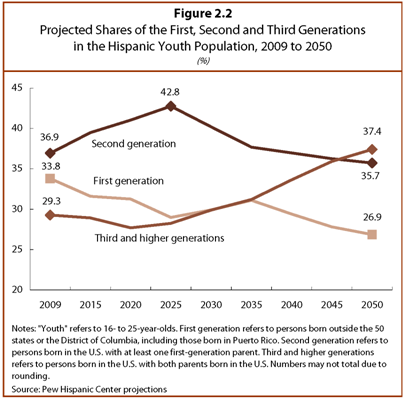 However, the share of the foreign born has diminished steadily, partly because the earlier wave of migrants are now having children and partly because the wave of migration itself has abated. Thus, in March 2009, it is estimated that 33.8% of Latino youths were foreign born, compared with 36.9% of Latino youths who were members of the second generation.