The socioeconomic background of Hispanic children is one important set of factors influencing their educational success and overall well-being. Table 2 presents a recent snapshot of the characteristics of Hispanic children by generation. The characteristics in the lower part of Table 2 refer to the nature of the child’s household, not the child per se. First- and second-generation children can reside in the same household (that is, they may be siblings), and so some degree of similarity can be expected in the nature of the household characteristics of first- and second-generation children. 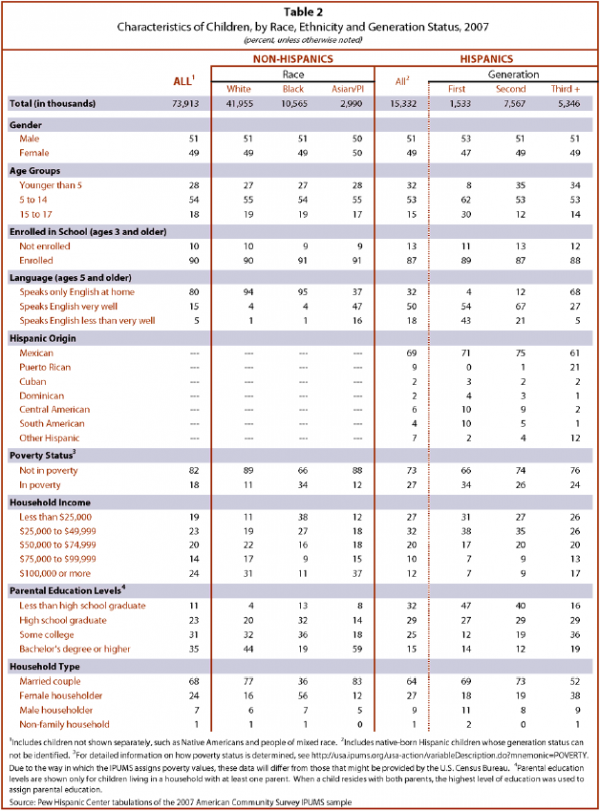 Although the basic socioeconomic factors suggest that Hispanic children in the third generation or higher may have a leg up on their peers, not all the advantages lie with the children of parents who were born and educated in the U.S. For example, Hispanic children in the third generation or higher are twice as likely as other Hispanic children to live in a female-headed household (Table 2). Single-mother families are more likely to live in poverty, and adolescents residing with both biological parents tend to display better educational outcomes and less risky behavior than do adolescents raised in other family arrangements (Ellwood and Jencks, 2002).

One of the most extensive investigations of the well-being and outcomes of the children of immigrants found that “Along a number of important dimensions, children and adolescents in immigrant families appear to experience better health and adjustment than do children and youth in native-born families” (Hernandez, 1999). With the exception of obesity, second-generation Hispanic adolescents seem to have fewer physical health problems than their counterparts in the third generation or higher.

In conclusion, many important aspects of the lives of Hispanic children vary by generational status. Projections suggest that the family context of Hispanic children is changing and that in future years a greater share will be born into families that have been in the United States for at least a generation and whose parents will have been born and educated in the U.S. This compositional change will likely affect the educational and social outcomes of Hispanic children—perhaps for the better, perhaps not.