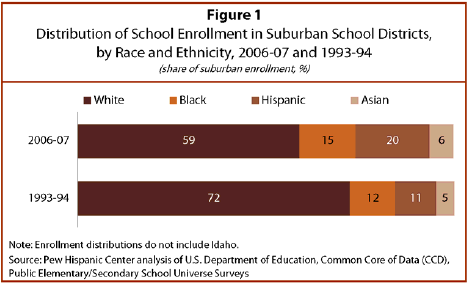 The movement of minority students into suburban schools has had the overall effect of slightly reducing levels of ethnic and racial segregation throughout the nation’s 93,430 public schools. However, trends vary for different minority groups, community types, school districts and, especially, individual schools. For example, despite the sharp rise in the racial and ethnic diversity of suburban district enrollments overall, there has been only a modest increase in the racial and ethnic diversity of student populations at the level of the individual suburban school.

These findings are based on an analysis of the most recent available enrollment figures for the nation’s public schools. The National Center for Education Statistics of the U.S. Department of Education collects this information and also classifies school districts as being suburban, city or town/rural districts.

School-Level Diversity in the Suburbs

In 2006-07, the typical white suburban student attended a school whose student body was 75% white; in 1993-94, this same figure had been 83%. So at a time when the white share of student enrollment in suburban school districts was falling by 13 percentage points (from 72% in 1993-94 to 59% in 2006-07), the exposure of the typical white suburban student to minority students in his or her own school was growing by a little more than half that much—or 8 percentage points.

Looking at the exposure of minority suburban students to their own racial or ethnic group rather than to whites, a different pattern emerges for Hispanics than for blacks or Asians.

The movement of minority students into suburban school districts since 1993-94 has had an impact on national trends in minority student isolation. Nationally, the typical black student in 2006-07 attended a school that was 52% black, down from 54% black in 1993-94. This modest decline is partly attributable to the fact that a greater share of black students are now educated in suburban schools, where they tend to be less isolated than in city schools. Nationally, the typical Hispanic student in 2006-07 attended a school that was 55% Hispanic, up from 52% Hispanic in 1993-94. The increase in Hispanic isolation nationally would have been even greater in the absence of the shift of Hispanic students out of city school districts and into suburban areas. Nationally, the typical Asian student in 2006-07 attended a school that was 23% Asian, up from 22% in 1993-94. 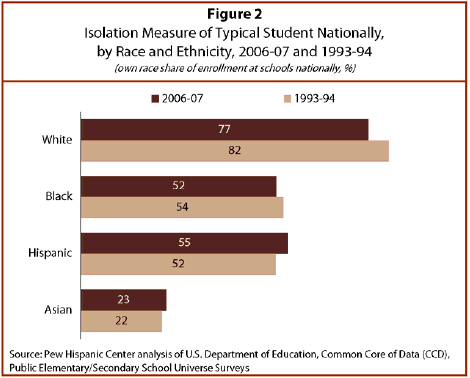 The Dissimilarity Index: Another Measure of School Segregation

This report examines the changing levels of exposure that minority students have to themselves and to white students, and the changing levels of exposure that white students have to themselves and to minority students. Such isolation/ exposure indexes are a commonly used research tool, but they are not the only way researchers measure school segregation. Another widely used measure is the dissimilarity index, which gauges the evenness of the spread of students across the schools in a school district. Formally, it is the proportion of a student group that would have to change schools for all schools in the district to have the same proportion of the group as the district-wide average.

To see if we would find patterns consistent with those of our isolation/exposure analysis, we tabulated the dissimilarity index for all suburban districts and used it to examine the degree of segregation within a particular school district (not a larger geographic area such as a metropolitan area).

The term “school district” is used generically and refers to any public local education agency that enrolls students. This includes regular school districts as well as administrative and service agencies and state- and federally operated agencies.

Next: II. The Growth and Diversification of Suburban School Enrollments
← Prev Page
You are reading page1Page2Page3Page4Page5Page6Page7
Next Page →