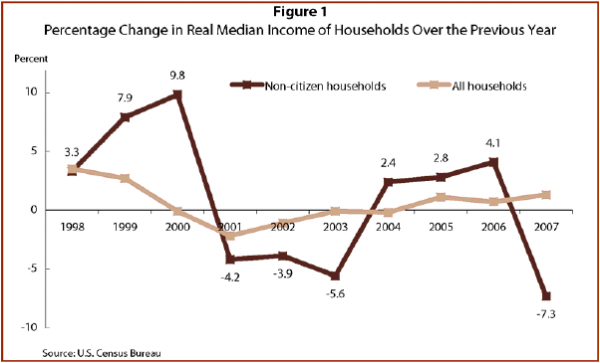 The economic recovery that commenced in the middle of 2003 reestablished growth in earnings. The incomes of non-citizen households increased 2.4%, 2.8% and 4.1% in three consecutive years, from 2004 to 2006. But this growth halted and reversed sharply in 2007 as incomes dropped 7.3%. The cause for the latest setback appears to be the decline of activity in the construction industry, which shed more than 700,000 jobs in 2007 and caused a jump in the unemployment rate for foreign born and Hispanic workers. (Kochhar, 2008)

Although non-citizen households experienced greater income instability, their incomes increased by more than average in the past 10 years. The cumulative effect of the ups and downs was to raise household incomes for non-citizens by 8.0%—from $30,000 in 1997 to $32,414 in 2007 for the hypothetical household. However, for all households in the U.S., incomes increased only 5.6% on average—from $30,000 in 1997 to $31,682 in 2007 for a hypothetical household.10