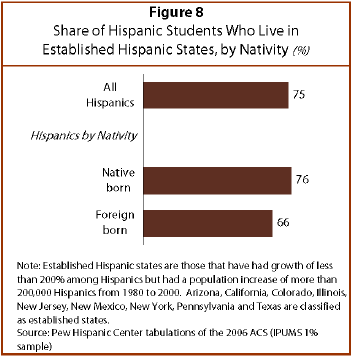 Foreign-born Hispanic students tend to be educated in slightly different states than those who are native born. Less than half (46%) of Hispanic foreign-born public school students live in Texas and California, and only two-thirds (66%) reside in the nine “established” Hispanic states. They are more likely than their native-born counterparts to live in the “new” Hispanic states mentioned above (21%) as well as the “emerging” Hispanic states of Arkansas, Indiana, Kansas, Maryland, Minnesota, Nebraska, New Hampshire, Oklahoma, Rhode Island, Tennessee, Utah and Wisconsin (8%).