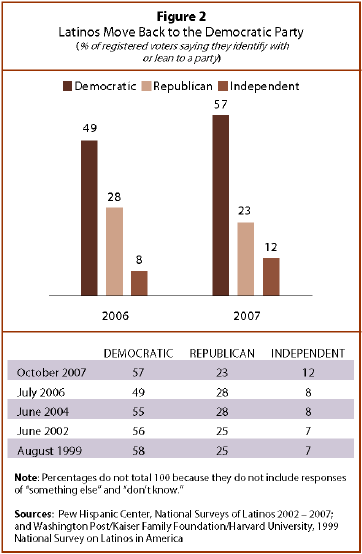 Latinos in this country have historically identified more with the Democratic Party than the Republican Party. Since the turn of this century, the GOP has been cutting into that partisan advantage—until now.

Considering both those who identify with a given party and those who say they lean toward that party, Democrats in 1999 enjoyed a 33 percentage point edge over Republicans in partisan allegiance among Latino registered voters (58%D versus 25%R). That margin fell to just 21 percentage points (49%D versus 28%R) in July 2006. However, it has spiked back up to 34 percentage points (57%D versus 23%R) in the latest Pew Hispanic Center survey, taken in October and November.2

The survey finds that the Democratic advantage over Republicans (among identifiers and leaners) is fairly consistent across most major demographic groups within the Latino community. For example, there little difference in partisan allegiance between Latino men and women, or between native-born and foreign- born Latinos.

There are some modest demographic variances, however. Young Latino registered voters are even more inclined than their elders to tilt away from the GOP; the Democratic partisan allegiance edge among 18- to 29-year-olds is 46 percentage points (64%D versus 18%R).

Looking at all Latinos, rather than only at those who are registered voters, the partisan patterns are broadly similar. The Democratic allegiance gap, after narrowing in the earlier part of this decade, has also widened once again among this larger universe of Hispanics. The main difference is that, among the full population of adult Latinos, a greater percentage describe themselves as independents (20%) than do Hispanics who are registered voters (just 12% of whom say they are independents and do not lean to either political party).

It also bears noting that in recent years Democrats have improved their standing with non-Latinos as well. According to surveys taken by the Pew Research Center for the People & the Press, Democrats now enjoy a 49% to 40% party affiliation edge over Republicans (leaners included) among non-Latinos; by contrast, in the period from 2001 through 2004, the parties were roughly at parity among non-Latinos.

Which Party Cares More About Latinos? 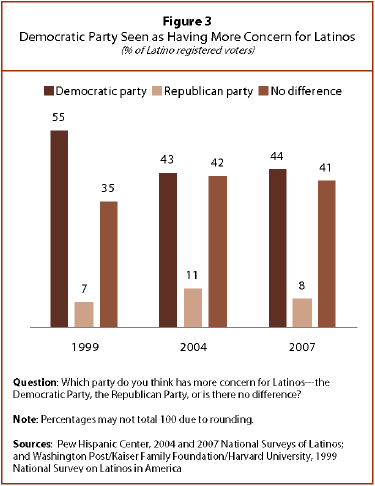 The same pro-Democratic tilt found in Latino partisan allegiances is seen in Latino views about which party has more concern for Latinos. Some 44% of Latino registered voters say the Democrats have more concern, while just 8% say the GOP has more concern. But four-in-ten (41%) say there’s no difference between the parties on this question.

The Democratic edge over the GOP on this question is a little bit bigger now than it was in 2004, but is not as large as it was in 1999 (when the Democratic advantage was 55% to 7%). 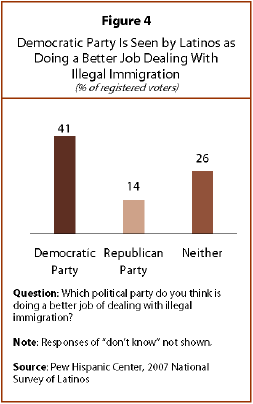 On the issue of dealing with illegal immigration, here, too, the Democrats enjoy a big edge over the Republicans—though, as on other issues, a sizable minority of Latino registered voters don’t see a difference between the parties.

Among registered Latino voters, 41% say Democrats are doing a better job dealing with illegal immigration and just 14% say the GOP is doing better. The remainder say neither party (26%), both (7%) or don’t know (12%).

Looking at the entire Latino adult population, rather than only at Latino registered voters, one finds a broadly similar response pattern. The one difference is that a majority of all Latinos respond to this question by saying both (9%), neither (23%) or don’t know (19%). Among those who do make a choice, the Democrats top the Republican by 36% to 13%. 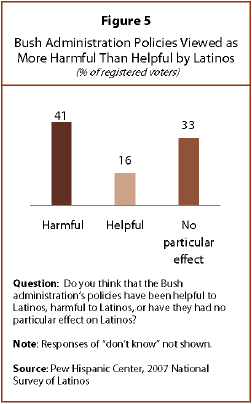 Some four-in-ten (41%) Latino registered voters say the policies of the Bush administration have been harmful to Latinos, while just 16% say they have been helpful. Another third say they have had no particular effect.

There are few differences on this question by age, income, gender, immigrant status or educational attainment. Nor is there much difference between Latinos who are registered voters and those who aren’t.

Not surprisingly, Latinos who align with the GOP are more inclined than others to see the administration’s policies as being helpful to the Latino community. However, just three-in-ten (31%) feel this way, while two-in-ten (19%) say the policies have been harmful and a plurality of 40% say they have had no particular effect.

Awareness of a Latino in the Presidential Race

Fewer than one-in-six Latino adults surveyed are aware that one of the 2008 presidential hopefuls is Latino, and only about one-in-eight (12%) are able to name that candidate—New Mexico Gov. Bill Richardson (D). 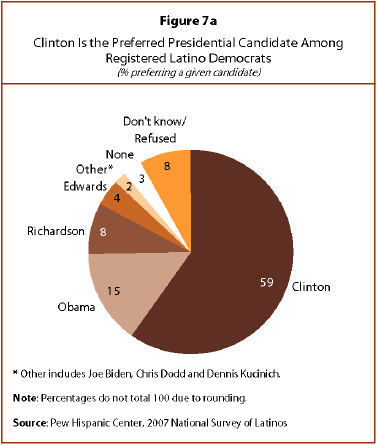 Hillary Clinton enjoys a big advantage among Latinos in the Democratic presidential nomination contest. She is favored by 59% of Latinos who are registered voters and align with the Democratic Party. Illinois Sen. Barack Obama runs a distant second with 15% support; while Richardson draws 8% and former North Carolina Sen. John Edwards 4%. No other candidate in the Democratic field polls more than 1% in this survey. 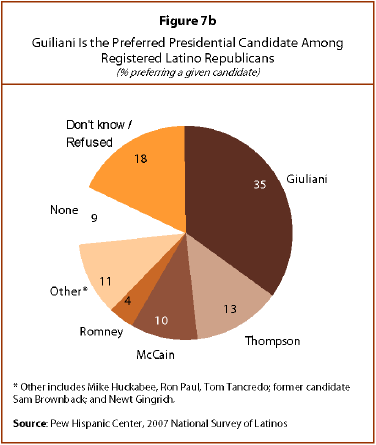 Clinton enjoys the support of a majority of virtually all demographic groups within the Latino community—old and young, lower income and higher income, native born and foreign born. As with the population as a whole, she is more popular with Latino women (66% of female self-identified Democratic Latino registered voters support her for president) than among Latino men (50% of male self-identified Latino registered voters support her candidacy).

On the Republican side, former New York Mayor Rudy Giuliani is supported by 35% of Latino registered voters who align with the GOP, followed by former Sen. Fred Thompson of Tennessee with 13%; Sen. John McCain of Arizona 10%; and former Massachusetts Gov. Mitt Romney 4%. About a quarter of Republicans either say that they don’t know (18%) whom they support in the GOP field or that they support none of the candidates (9%). 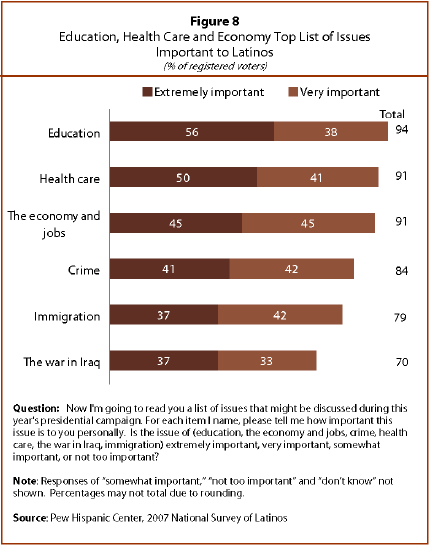 Even though immigration has had a very high profile in the early stages of the 2008 presidential contest, it does not rise to the top when Latinos registered voters are asked to state which issues in the campaign are very important to them personally.

Given a list of six issues, the greatest number of Hispanic respondents (94%) consider education as either extremely important or very important. Next comes health care (91%); then the economy and jobs (91%); crime (84%); immigration (79%); and the war in Iraq (70%).

It bears noting that the wording of this question refers to “immigration”; it is possible that responses would have been different if the term “illegal immigration” had been used. It also bears noting that, among the issues tested in this survey, immigration is the only one that has risen significantly in importance since 2004. Back then, just 63% of Hispanic registered voters called immigration an extremely or very important issue, placing it last in importance among the 10 issues listed in the Center’s nationwide survey of Latinos taken in June of that year.

On the other five issues tested in this survey, there are modest differences between the native born and the foreign born—with more of the native born, in every case, judging the issue to be “extremely important” to them. Also, Latino women are more inclined than Latino men to view all of these issues as extremely important. Other demographic traits—such as age and income and education—produce only minor variances and no consistent pattern in the responses to this question.