This section examines the employment of native-born workers grouped by race, ethnicity and wage class in 1995 and 2005. Like their foreign-born counterparts, native-born Latinos are more likely than average to be in the lower wage groups. Similarly, native-born Asians are more likely than average to be high-income workers. The wage profile of non-Hispanic blacks resembles that of Hispanics, and the earnings profile of non-Hispanic whites is similar to that of Asians. However, in the 1995 to 2005 period, there was little to no change in the position of native-born groups in the wage distribution.

Of the 7.6 million native-born Hispanic workers for whom earnings data were available in 2005, 1.9 million, or 26%, were low-wage earners and 1.7 million (23%) were low-middle earners (Tables 10 and 11). When the two groups are combined, about 50% of native-born Latino workers placed below the middle of the wage distribution in 2005.

In 1995, earnings data were available for 5 million native-born Hispanics. Of that number, 1.4 million Latinos, or 27%, were low-wage earners and 1.1 million, or 23%, were low-middle earners. Thus, 50% of Latino workers were below the middle of the wage distribution in 1995. That proportion did not change by 2005.

Slightly more than one in 10 native-born Hispanic workers is a high-wage earner. There were 940,000 high-wage Latinos in 2005 and 579,000 in 1995. In both years, they represented 12% of the native-born Latino workforce. Hispanic representation in the middle-wage class is about as expected, with 22% of Latinos earning that wage in both 1995 and 2005. 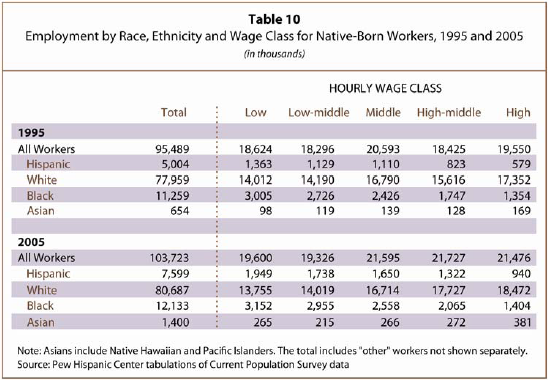 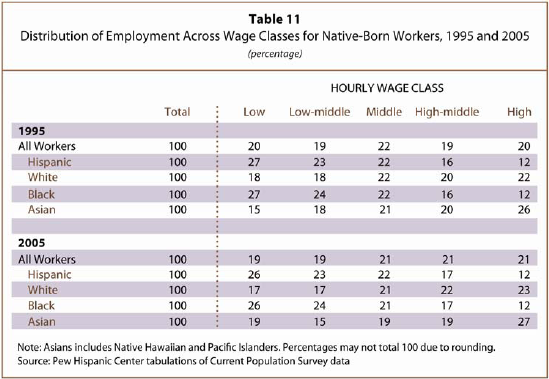 Half of the native-born black workers were in the lower groups of the wage distribution in 2005, the same as in 1995. In particular, of 12.1 million native-born black workers, 3.2 million, or 26%, were low-wage earners in 2005 and another 3 million, or 24%, were low-middle earners (Tables 10 and 11). Those proportions were virtually unchanged in comparison with 1995. Almost 30% of black workers were in the two highest rungs of the wage distribution and that, too, was unchanged between 1995 and 2005. 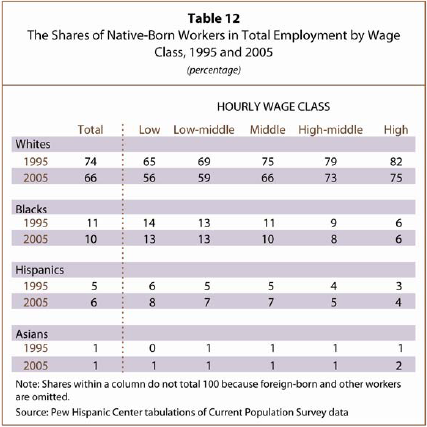 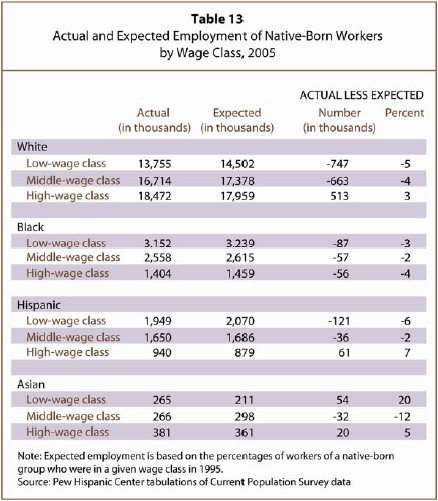 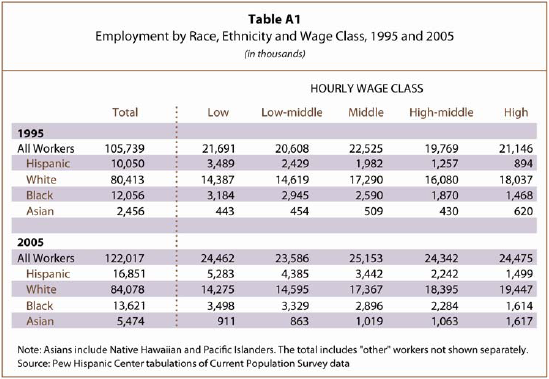 Next: Methodology
← Prev Page
Page1Page2Page3You are reading page4Page5Page6
Next Page →