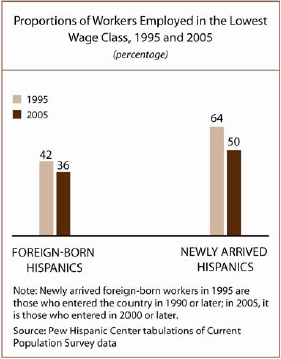 Foreign-born workers, who now comprise 15% of the U.S. labor force, made notable progress into middle- and high-wage jobs between 1995 and 2005. During this period, many foreign-born Latinos stepped out of the low-wage workforce and headed toward the middle of the wage distribution.

In particular, newly arrived Hispanics proved much less likely to be low-wage workers in 2005 than in 1995. Higher levels of education and a move from jobs in agriculture to construction aided the progress of Latinos in the wage distribution scale. At the same time, there was a large drop in the proportions of workers born in Mexico and Central America who were in the lowest wage class. Among all foreign-born workers, the strongest gains were made by Asians, who significantly boosted their presence in the high-wage workforce.

In contrast to the experiences of foreign-born workers, there was little to no change in the position of native-born groups in the wage distribution between 1995 and 2005. The main exception was the experience of native-born white workers. Their employment growth was largely confined to the high-wage group. Even as their share in the workforce dropped, they added more workers to the high-wage workforce than might have been expected based on demographic trends alone.

These developments came about as two intertwined trends—the growth of the Hispanic population and immigration—have transformed the demography of the U.S. labor market in recent years. The share of Hispanics in the labor force (those with a job or actively looking for a job) stood at 6% in 1980. Their share increased to 9% by 1995 and then to 13% by 2005. At the same time, the share of foreign-born workers in the labor force grew from 7% in 1980 to 11% in 1995 and then to 15% by 2005. These shares will continue to increase in the near future because Latino and foreign-born workers account for the majority of new workers in the economy.

This report uses the prism of the wage distribution to study the integration of foreign-born workers, especially Latinos and Asians, into the U.S. labor market. The analysis addresses key questions about this fast-growing workforce: Are these foreign-born workers crowding into the low-wage segments of the workforce? What are the growth rates for immigrant workers in the middle- and high-income segments of the workforce? How are the newly arrived immigrant workers faring?

Estimates are derived from the Census Bureau’s Current Population Survey (CPS), a monthly survey of approximately 60,000 households. Data on earnings are available for one-quarter of the monthly sample. Twelve monthly samples with earnings data are combined to conduct the analysis on an annual basis. The analysis in this report focuses on changes between 1995 and 2005.1

The study first examines the demographic characteristics of the wage distribution in 2005. The principal characteristics of interest are workers’ nativity, race and ethnicity. That is followed by an analysis of the progress of foreign-born workers in the wage distribution between 1995 and 2005. The last section in the report briefly examines the experience of native-born workers and individual racial and ethnic groups in the same time period.

Assigning Workers to a Wage Group

Workers are assigned to one of five wage groups depending on their rank in the wage distribution. In ascending order, the five wage groups are referred to as low wage, low-middle, middle, high-middle and high. That classification is done once for 1995 and again for 2005.

On average, one-fifth of workers are expected to fall into each of the five wage groups. In other words, about 20% would fall into the low-wage group, 20% into the low-middle group and so on. The lowest earning 20% of the workforce is the low-wage workforce. The highest earning 20% of the workforce is the high-wage group. Workers who fall in the middle 20%, or the third of the five wage classes, are middle-wage workers.

The distribution of individual categories of workers, such as foreign-born or Latinos, may differ from this average. Relatively more or less of a particular group of workers may lie above or below the middle of the wage distribution.

The assignment of a worker to a wage class is based strictly on that worker’s wage relative to the wages of other workers. Thus, the income range that defines the middle of the distribution varies from one period to the next. It should be noted that the terms “low wage,” “middle wage” and “high wage” refer merely to different points of the wage distribution. This report does not attempt to use absolute notions or test alternative definitions of what it means to be a low-, middle- or high-income worker. 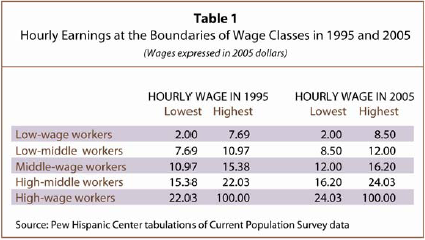 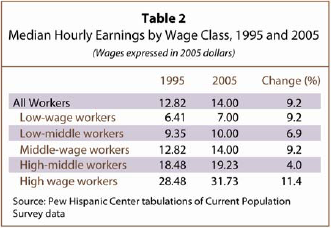 The number of workers counted in this report is less than the actual number employed in the labor market. The unincorporated self-employed, workers without pay and those whose earnings are very low (less than $2 per hour) or high (more than $100 per hour) are excluded from the analysis.

In addition, there is some sample loss due to missing data on earnings or usual hours worked. For example, the Bureau of Labor Statistics reported that employment in the U.S. in 2005 was 142 million. However, Table 8 in the report shows 122 million as the total number employed in 2005, or about 85% of the actual level of employment. Thus, employment levels in this report should not be interpreted to represent actual employment in the economy at the point in time in question. The missing observations, representing 15% of employment, would have an effect on the findings in this report only if their characteristics were extremely different from the remainder of employed workers.

Next: II. Foreign-Born Workers in the Wage Distribution
← Prev Page
You are reading page1Page2Page3Page4Page5Page6
Next Page →