Previously, the Pew Internet & American Life Project conducted telephone surveys only in English and reported on the internet activities of English-speaking Hispanics.4 Building on this and research conducted by other organizations,5 the Pew Hispanic Center added basic internet penetration questions to telephone surveys conducted in the summer and fall of 2006 of over 6,000 Latino adults with land-line telephones, which were conducted in Spanish and English. The large combined sample of the two surveys allows for detailed analysis of various Hispanic demographic groups.6

Just over half of Latinos go online, a figure well below the level of adoption for whites

Much of the difference in internet usage between Hispanics and non-Hispanics is explained by socio-economic differences in the composition of the groups. These characteristics are often intertwined, especially in the Hispanic foreign-born population and it is difficult to isolate one as more important than another. However, race differences in education and English abilities stand out as factors essential to explaining the gap in internet use between Hispanics and non-Hispanics.

Individuals who have not graduated from high school are much less likely to use the internet regardless of their racial or ethnic background. Four in ten Hispanic adults have not completed high school, compared with about one in ten white adults. Therefore the low rate of high school completion among Hispanics contributes to their relatively low internet use. In a statistical analysis of the survey results, we neutralized the differences between Latinos and whites in their educational profiles and the result was that their overall rate of internet usage was the same.

Among the variables unique to the Latino population, language is highly significant in predicting a wide range of attitudes, behaviors and socio-economic outcomes, and, as this study demonstrates, internet use is among them. Fully 78% of English-dominant Latinos use the internet, compared with 32% of Spanish-dominant Latinos. Again, as a matter of statistical analysis, if one neutralizes the differences in English proficiency, then the differences in the rate of internet usage between Hispanics and non-Hispanics disappear.

As in the general population, certain groups of Latinos are less likely than others to go online: those with less education, those with lower household incomes, and those who are over the age of 60 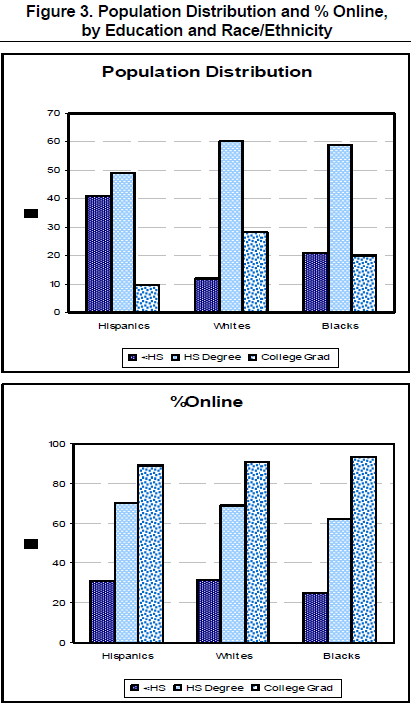 Both white and African American respondents have higher annual household incomes than the Latino sample and, as is the case with Latinos, the likelihood of internet use increases with higher income. 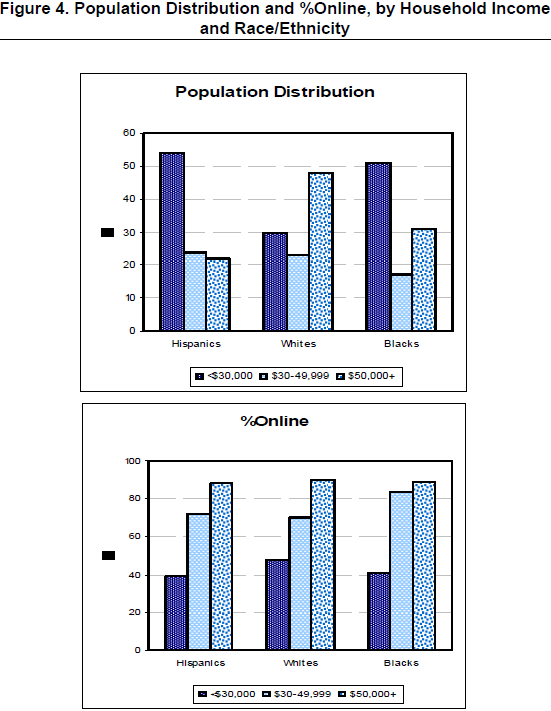 As noted above, Latinos are a young population with nearly twice as large a share of adults under 40 than among whites.7 Ongoing studies by the Pew Internet Project consistently show that younger Americans across all groups are more likely than their elders to use the internet. For example: 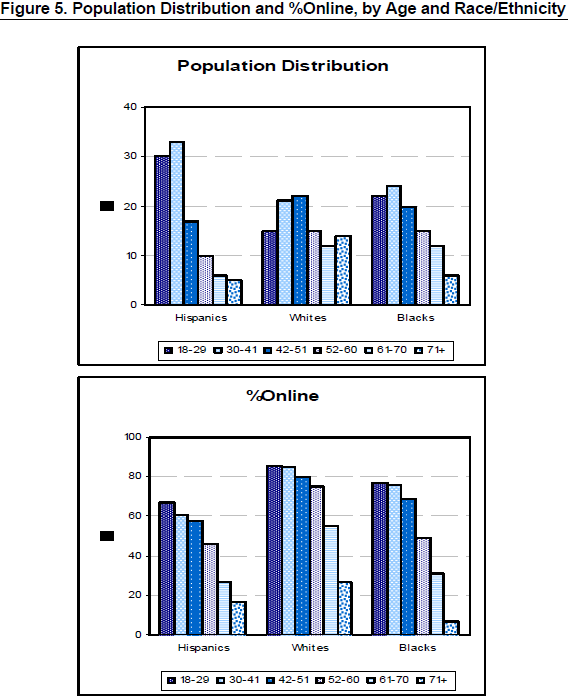 The Pew Hispanic Center has chronicled the effects of language on assimilation, as well as the differences between first-, second-, and third-generation Latinos.8 This survey extends that analysis into the digital realm, showing that speaking Spanish is a significant, independent factor in a Latino adult’s likelihood to go online.

“Spanish dominant,” “English dominant,” and “bilingual” — determined by inquiring about a respondent’s ability to speak or read Spanish and English.

Fully 78% of Latinos who are English-dominant and 76% of bilingual Latinos use the internet, compared to 32% of Latinos who are Spanish-dominant. This connection does not diminish when other factors are held constant, such as age, education, income, or nativity. Spanish-dominant Latinos are less likely to use the internet at all income and education levels, for example. To illustrate the robustness of this association, Figure 6 displays the overall rates of internet use, as well as the rates of English proficiency for native-born and foreign-born Hispanics. It is very striking that the differences in internet use for each of the three language groups do not vary markedly by nativity. 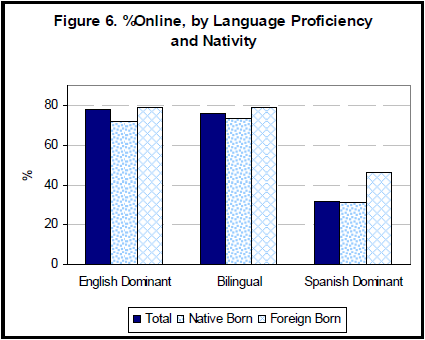 The connection between nativity, generation, and internet use remains strong even when other factors are held constant, such as age, education, and income. Again, language seems to have an independent association with the propensity to use the internet; foreignborn Latinos who speak English are more likely to use the internet than foreign-born Latinos who are Spanish-dominant, for example.

Diversity of national origins is a hallmark of Hispanics in the U.S.9 Each group has a unique socio-economic profile, history, and mix of native born and immigrants, making national origin an essential part of our analysis of Latinos online.

Mexicans are the largest national-origin group by far in the U.S. Latino population and are among the least likely to go online: 52% of Latinos of Mexican descent use the internet. This continues to be the case when other factors are held constant, such as age, income, language, nativity, generation, or time in the U.S. Mexicans’ low educational attainment largely explains this lower internet penetration rate.

Latinos who trace their origins to Central America (which is comprised of El Salvador, Nicaragua, Guatemala, Belize, Honduras, Panama, and Costa Rica) are among the least likely to use the internet. Fifty percent of Latinos who trace their origins to Central America use the internet. The relative disadvantage of Central Americans in the U.S. is largely responsible for this pattern: if Central Americans had the levels of education or English proficiency of their other Hispanic counterparts, their internet use would rise markedly. The fact that they are disproportionately foreign born also plays an important role in explaining their low internet use. Their age composition, income, and years spent in the U.S. do not have dramatic impacts on the relatively low levels of internet use among Central Americans.

Dominicans are in line with the general Hispanic population when it comes to internet use: 59% of Latinos who trace their origins to the Dominican Republic go online. The fact that many Dominicans speak mostly Spanish, and are predominantly foreign born somewhat suppresses their rate of internet use. Controlling for age, education, income, or the number of years spent living in the U.S. has little effect on the relative internet use of Dominicans. 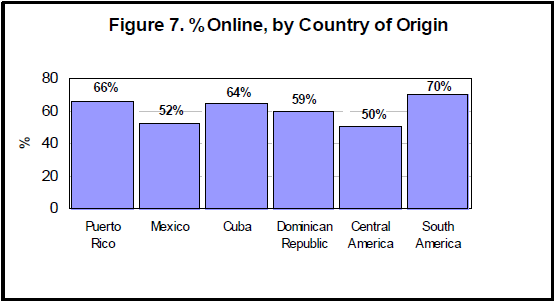 The Pew Internet Project has found that a home broadband connection deepens an internet user’s relationship with the online world. Broadband users are more likely than dial-up users to shape their online environment, not just surf through it. For example, 32% of internet users with a home broadband connection have shared something online that they created themselves, such as artwork, photos, stories, or videos, compared with 20% of home dial-up users. Eleven percent of home broadband users keep a blog, compared with 4% of home dial-up users.10 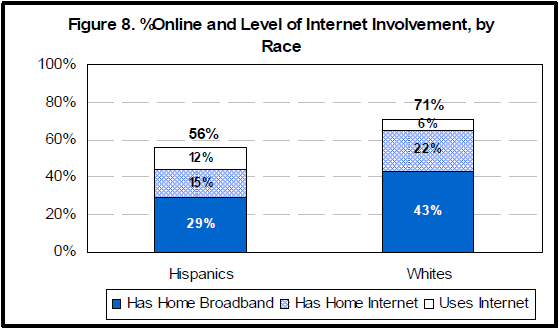 Latinos Online II. Latinos in the U.S.
III. Latinos Online
Just over half of Latinos go online, a figure well below the level of adoption for whitesEducation and English proficiency are highly significant factors in explaining race differences in internet useAs in the general population, certain groups of Latinos are less likely than others to go online: those with less education, those with lower household incomes, and those who are over the age of 60Immigrants and those who speak mostly Spanish are less likely than other groups to use the internetLatinos from Mexico are less likely than those from the rest of Latin America to use the internetLess than one-third of Latino adults have a broadband internet connection at home
IV. Latinos Offline Methodology