Consider a traditional immigrant settlement state such as California. In both 2000 and 2004, the employment rates for native-born workers in California were below average. This outcome could not be attributed to the rate of growth in the foreign-born population 16 and older because the rate in California was well below average from 1990 to 2000 and from 2000 to 2004.

But in California, foreign-born workers make up more than 30% of the labor force, well above the average of 9.7%. Having such a large stock of foreign-born workers raises the possibility that their sheer numbers contributed to relatively worse outcomes for native-born workers. Does this hold true across all other areas?

But each state also represents extenuating circumstances. The lower-than-average employment rates in Florida and New York are more likely a consequence of demographic and economic factors unrelated to the presence of foreign-born workers. Florida has a much higher-than-average share of residents 65 and older (21% of the working-age population compared with 16% for the country, according to American Community Survey data for 2004). This demographic reality naturally lowers the labor force participation rate and the employment rate in Florida. 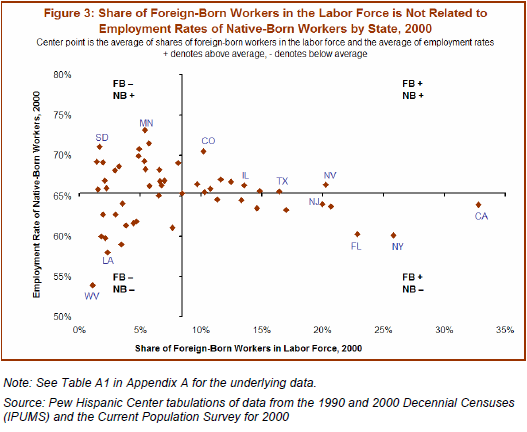 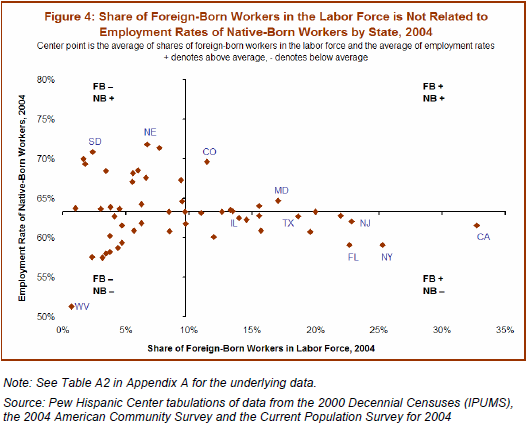 Next: VII. Education and Age as Factors
← Prev Page
Page1Page2Page3Page4Page5You are reading page6Page7Page8
Next Page →