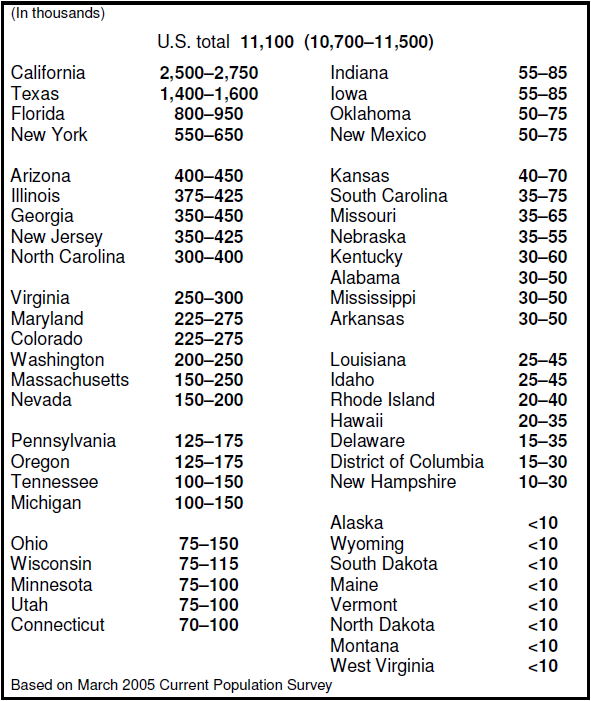 The estimates reported here for the number of unauthorized migrants1 living in the 50 states and the District of Columbia are based on a well-established methodology applied to data from the March 2005 Current Population Survey (CPS). The CPS, a monthly survey of about 50,000 households conducted jointly by the U.S. Bureau of Labor Statistics and the Census Bureau, is best known as the source for monthly unemployment statistics. Every March both the sample size and the questionnaire of the CPS are augmented to produce the Annual Social and Economic Supplement, which provides additional data on several additional subjects, including the foreign-born population.

As previously reported, the Center’s analysis of the March 2005 CPS shows that there were an estimated 11.1 million unauthorized migrants in the United States a year ago. Based on analysis of other data sources that offer indications of the pace of growth in the foreign-born population, the Center developed an estimate of 11.5 to 12 million for the unauthorized population as of March 2006. A full report on the estimates including a description of the methodology can be found in: Size and Characteristics of the Unauthorized Migrant Population in the U.S.: Estimates Based on the March 2005 Current Population Survey

The March CPS supplement in any given year does not provide enough data to provide a precise point estimate of the size of the unauthorized population in all states. Variability in the survey sample precludes precise year-to-year comparisons for some sub-populations. Therefore, the estimates by state are presented here as a range. While based primarily on the March 2005 CPS, the estimates developed out of an analysis of CPS-based estimates for 2000 to 2005 and Census-based estimates for 2000. The analysis included both an examination of trends across the estimates for all six years and averaging of results in two- and three-year increments to reduce the effects of sample variability.

In addition to the reports noted above, the Center has produced two other fact sheets regarding unauthorized migrants based on the analysis of the March 2005 CPS: