The occupational divide across Hispanics and whites grew wider between 1990 and 2000. That is perhaps surprising in light of the record economic expansion that lasted virtually the entire decade. However, restructuring within and across industries tended to fuel demand for Hispanic and non-Hispanic workers in a differential manner and they trended into different occupation over the decade. Hispanic workers expanded their presence mostly in construction and service occupations during this time. On the other hand, white workers were much more likely to be found in professional occupations in 2000 than in 1990.4 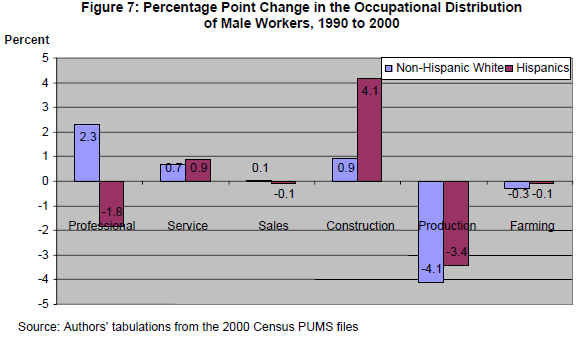 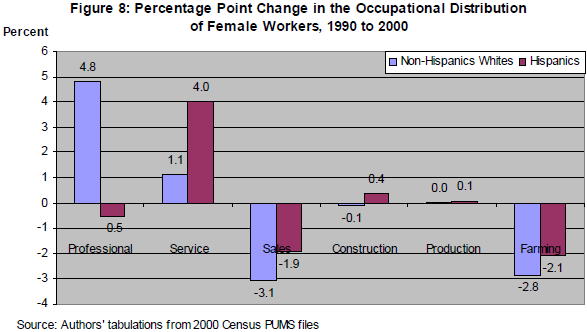 Several factors contributed to the growing dissimilarity in the occupational distributions of Hispanics and whites. One factor is education. Hispanics are less likely to be college educated than non-Hispanics and this disparity widened during the 1990s. Table 5 shows the schooling level of Hispanics, whites and blacks (ages 16 and older) in 1990 and 2000. About 27 percent of Hispanic workers had at least some college education in 1990. By 2000, this proportion had increased only slightly to 28 percent.5 In contrast, 47 percent of white workers had at least some college education in 1990 and this proportion increased to 53 percent by 2000. Black workers too registered increases in their level of education during the 1990s. Thus, non-Hispanic workers were relatively more educated in 2000 than in 1990 and this would be one reason why they increased their representation in professional occupations. 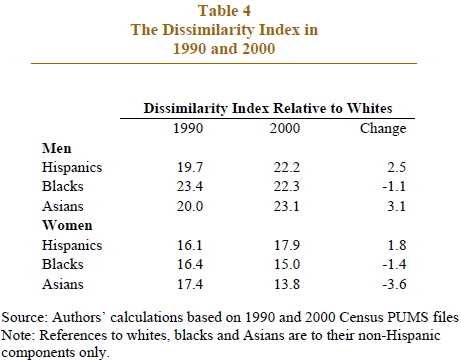 In addition to schooling, demand conditions in the labor market also play a role in shaping the occupation distributions of workers. Table 6 summarizes the effect of demand factors in changing the occupation distributions of Hispanic and non-Hispanic white male workers between 1990 and 2000.6 The data in Table 6 show the actual change in employment by occupation and the influence of three factors in determining the extent of the employment change. The first factor is labeled the “job growth effect.” In a world of perfectly balanced growth all industries would expand at the same rate and the demand for workers in all occupations would also increase in the same proportions. If overall employment increases by, say, 10 percent, the job growth effect raises employment in each occupation by 10 percent. Thus, the only difference in the economy and the labor force over time would be in the scale of operations and the occupational distributions of all workers would remain unchanged. 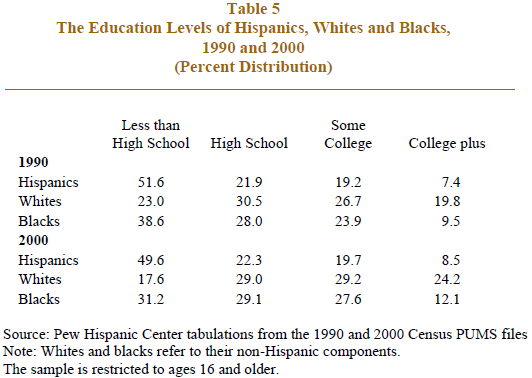 In reality, of course, industries grow at different rates and production technologies shift over time. Differences in the growth rates of industries will alter the relative demand for occupations and this effect is labeled the “industry shift effect” in Table 6. For example, a relatively high growth rate in the construction industry will cause the demand for construction workers to increase at a higher than average rate. That may work in favor of Hispanic male workers who are disproportionately concentrated in the construction industry. On the other hand, a more rapid rate of growth in the professional services industry might mean greater demand for the relatively better educated non-Hispanic workers.

Even if industry growth effects are not at work, changes in production technologies can favor one group of workers over another. For example, the advent of information technologies in the 1990s contributed to increased demand for computer-literate workers. That may have contributed to the growing movement of non-Hispanic white workers into professional occupations. This effect is labeled as the “occupation mix effect” in Table 6. 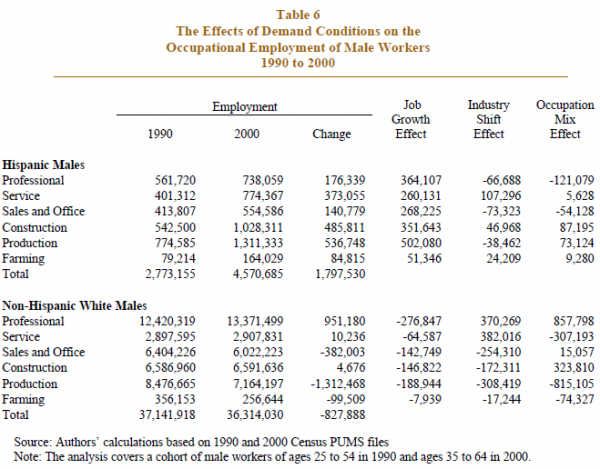 There were 2.8 million Hispanic male workers of ages 25 to 54 employed in the U.S. labor market in 1990. Driven by immigration, the size of this cohort increased by 1.8 million workers, or 65 percent, between 1990 and 2000 (Table 6). Under conditions of balanced growth, the employment of Hispanic males would have increased by 65 percent in each occupation. That would have meant, for example, an additional 364,107 Hispanic male workers in professional occupations. In actual fact, however, the employment of Hispanic males increased by only 176,339 between 1990 and 2000. This lower-than-expected increase in the employment of Hispanic professionals is due to the presence of negative industry and occupation effects. The occupation mix effect shows a loss of 121,079 jobs for Hispanics in professional occupations. This means that as a result of reorganization within industries, professional jobs held by Hispanic workers were less in demand in 2000 than in 1990. Hispanic professionals also tended to be in industries with sub-par growth rates, leading to a loss of 66,688 jobs due to the industry shift effect.

Job growth for Hispanics was above expectation in four occupations—farming, service, production, and construction.

Job growth for Hispanics was above expectation in four occupations—farming, service, production, and construction. Job growth in production occupations happened despite the general decline in manufacturing which was responsible for the negative industry shift effect. Hispanics benefited from a positive occupation mix effect, i.e. there was a shift in the hiring of workers in manufacturing that favored jobs in which Latinos were well represented.

The cohort of white male workers (ages 25 to 54 in 1990) diminished in size by 827,888 workers, or 2 percent, between 1990 and 2000. This decline is not surprising since, unlike Hispanics, immigration is not a significant force for replenishing the size of this demographic group. The overall decline implies a negative job growth effect for white males in all occupations. However, there was positive job growth for white males in professional, service, and construction occupations. Job gains in professional occupations were especially notable with an employment increase of nearly 1 million. Both industry and occupation effects worked to the benefit of white male workers. However, the same effects caused a loss of 1.3 million production jobs for white males between 1990 and 2000.

Overall, the increase in employment of Hispanic workers between 1990 and 2000 is largely explained by the increase in the size of their workforce. Their growth in numbers was either responsible for most of their increase in employment in an occupation, e.g. in service, construction and production occupations, or it was large enough to overcome negative industry and occupation effects, such as, in professional occupations. On the other hand, the size of the white male workforce is stationary and growth in any occupation, such as, in professional occupations, was dependent on the beneficial effects of industry and occupation effects.

Next: VI. The Determinants of Socioeconomic Status
← Prev Page
Page1Page2Page3Page4You are reading page5Page6Page7Page8
Next Page →