The occupation of a worker is an important determinant of his or her earnings and employment prospects. Occupations also convey a status upon workers based on the skill requirements and compensation generally associated with that occupation. But the mere distribution of a group of workers across occupations does not yield the information needed to infer their placement in the hierarchy of occupations. Some occupations require high education but pay relatively little, e.g. priests or teachers, while others require less education but pay relatively well, e.g. hazardous occupations in construction and mining. Which set of occupations is more prestigious depends upon the criterion that is applied. A related issue arises with respect to comparisons over time. If Latinos moved from production to construction occupations over time, does that mean an improvement or worsening in their occupational status? And how can we quickly ascertain whether the occupational characteristics of two or more groups of workers are converging over time? Finding answers to these sorts of questions is facilitated by the use of two composite indicators. 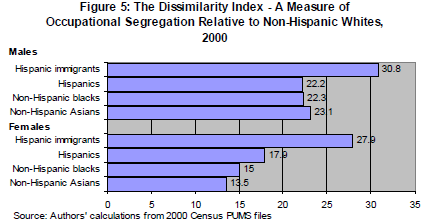 The evidence in Figure 5 shows that the occupational profile of Hispanic workers is just as different from that of white workers as the profiles of black and Asian workers. It is important to note that this does not mean Hispanic workers have the same occupational characteristics as black and Asian workers. For example, in the case of Latinos and whites the difference is driven by the greater concentration of Hispanics in construction and production occupations. But, with respect to Asians and white, the gap is a consequence of the greater presence of Asians in professional and scientific occupations.

The Dissimilarity Index is a useful tool for summarizing differences in occupational characteristics but it offers no judgment on the status of occupations in which groups of workers are engaged. That is provided by a second indicator that assigns a socioeconomic status score to each occupation. This score is derived from statistical analysis that, based on wages, measures the value each occupation assigns to an additional year of education or experience. The scores are scaled to fall within the range of 0 to 100. Occupations in which education and experience are highly valued will receive scores closer to 100. The average socioeconomic status score across the 475 detailed occupations listed in the Census data in 2000 was 34.8.

Table 1 shows the socioeconomic status score for each of 23 broad occupational categories. The highest score of 61 is attained by education, training and library occupations. Management occupations are close behind with a score of 54. The lowest scoring occupations, all with scores less than 20, are building and grounds cleaning, food preparation and serving, and farming, fishing and forestry. 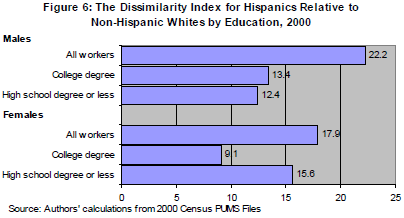 The average socioeconomic status score achieved by Hispanic workers is well below the average for white workers As shown in Table 2 the average socioeconomic status score for white males in 2000 was 37. This is slightly above the overall average of 35. Native-born Hispanic males score only 29 and foreign-born Hispanic males achieve a score of only 23. The lowest score of all belongs to Mexican immigrants whose average is 20 regardless of gender. That average is below the score for all but three of the 23 occupations listed in Table 1. Puerto Ricans and Cubans score above the average for all Hispanics. In fact, Cubans rank along with whites with respect to their socioeconomic status. The scores for male and female workers are virtually identical, differing only by a point here or there.

While the socioeconomic status of foreign-born Hispanics is low, it does improve with time spent in the United States. The data in Table 3 show that Mexican immigrants who have been in the U.S. for five years of less attain a score of only 17, but those who arrived in the U.S. over 30 years ago score 30 points, much closer to the overall average of 35 and the average of 37 for whites. Cuban immigrants started high on the scale relative to other Hispanics and those who arrived 20 years ago now have scores of 38 and above, higher than the U.S. average. It should be noted, however, that not all of this increase is necessarily a sign of progress with years spent in the U.S. At least some of this effect could be due to the possibility that immigrants who arrived earlier had a higher level of skills and, therefore, higher occupational attainment regardless of years spent in the U.S. This point is touched upon in greater detail at a later point in the report. 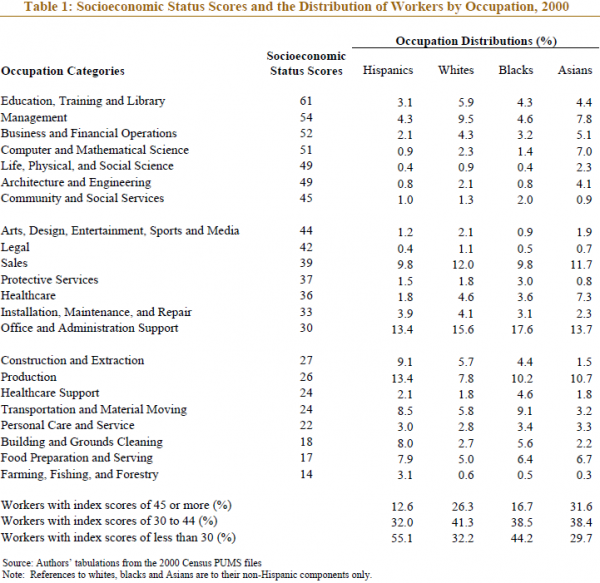 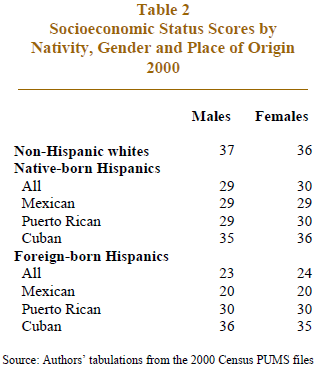 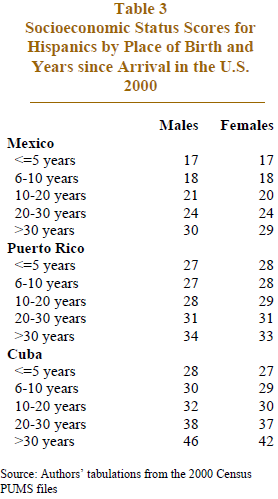 Next: V. Changes in Occupational Distributions and Status between 1990 and 2000
← Prev Page
Page1Page2Page3You are reading page4Page5Page6Page7Page8
Next Page →