A distinctive feature of the occupational profile of Hispanic workers is their lack of representation in professional occupations. Instead, Hispanics are more likely than average to be found in construction and production occupations. This trait is particularly true of Latinos of Mexican or Puerto Rican origin. The ongoing immigration of workers from Mexico has served to reinforce these occupational characteristics during the 1990s.

Hispanic male and female workers have very different occupational attributes. Almost half of Hispanic male workers—49 percent to be more exact—were concentrated in construction and production occupations in 2000 (Figure 2). In contrast, 61 percent of Hispanics females worked in service and sales occupations. Hispanic women are also more likely than their male counterparts to be in professional occupations. 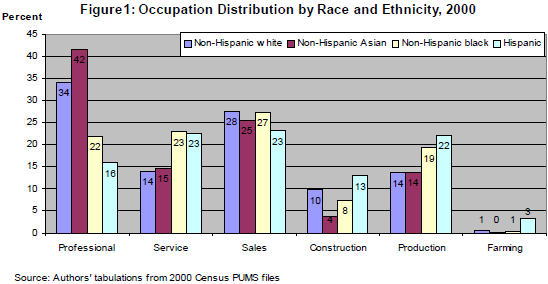 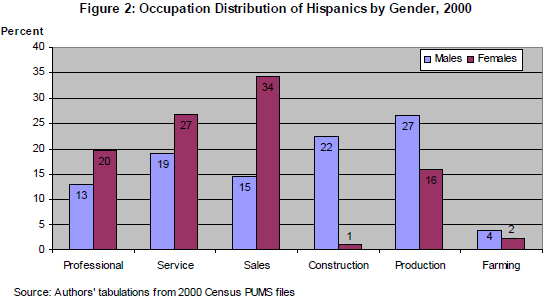 Of the three largest components of the Hispanic community—Mexicans, Puerto Ricans, and Cubans—the occupational profile of Cubans comes closest to resembling that of whites and Asians. Nearly 30 percent of Cubans worked in professional occupations in 2000 (Figure 3). On the other hand, only 13 percent of Mexicans were engaged in professional occupations and nearly twice as many, or 24 percent, were in production occupations. Mexican workers are also the most likely among Latinos to engage in construction and production work and farming occupations are almost their exclusive preserve within the Hispanic workforce. 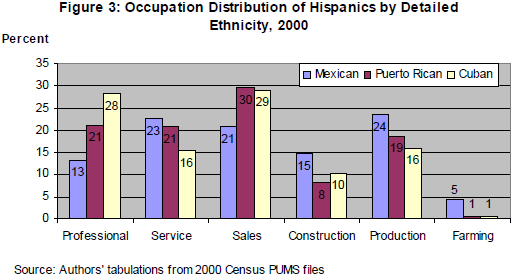 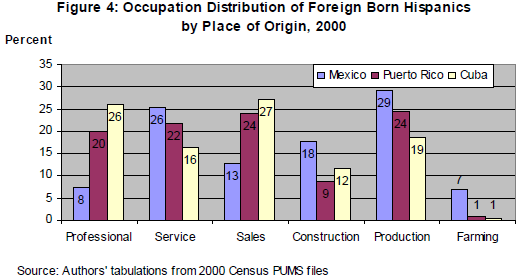 The occupational traits among Hispanics are reinforced by immigration, especially so for Mexicans. As shown in Figure 4, only 8 percent of immigrant Mexican workers were in professional occupations in 2000. Mexican immigrants are also much less likely to engage in sales occupations than the average for all Mexicans. That is a likely consequence of the lack of English-language skills among recently arrived immigrants. Nearly one-half, or 48 percent, of Mexican immigrant workers were engaged in construction and production occupations in 2000. Similar tendencies, albeit on a much smaller scale, are observed for workers born in Cuba and Puerto Rico.1

Next: IV. A Measure of Occupational Dissimilarity and the Socioeconomic Status of Occupations
← Prev Page
Page1Page2You are reading page3Page4Page5Page6Page7Page8
Next Page →