The pattern of rise, peak and decline evident in total immigration flows coincides closely with a similar pattern in the performance of the U.S. economy, and the correlation is particularly strong with the flow from Mexico. During the period of increased migration prior to the peak, U.S. employment increased by 1.59 million in 1993, the first full year of recovery after the 1991 recession; even greater increases in U.S. employment followed and 1.85 million jobs were added in 1998. The annual number of migrants coming from Mexico increased from about 332,000 to 507,000 over the same period. (See Detailed Table 5a.) In 2000, both the U.S. expansion and the growth of Mexican migration reached a peak. That year the U.S. economy added nearly 3.4 million jobs and migration from Mexico crested at an estimated 530,000 new arrivals. In the decline phase, the U.S. economy lost 415,000 jobs in 2002 and, while migration from Mexico continued, it dropped to 378,000. 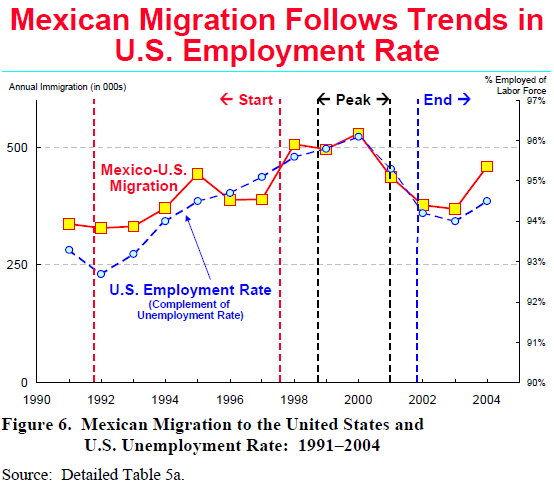 As the U.S. economy regained momentum in 2003 and 2004, the pace of Mexican migration picked up also. Detailed studies of the U.S. labor market during this recovery phase show that there has been heightened demand for low-skilled, low-wage workers largely because the construction industry has been responsible for much of the new job creation while other sectors such as manufacturing have continued to contract (Kochhar 2004 and 2005). Recently arrived Hispanic immigrants have constituted a disproportionate share of the new workers hired into the construction industry, according to these studies.

The annual flow of migrants from Mexico over the 1992–2004 period appears to be more closely correlated to macrotrends in the U.S. economy than in the Mexican economy. Of the variables we examine, changes in the rate of U.S. employment correlate most strongly, at 0.90. (See Detailed Table 5a and Figure 6.) Other U.S. economic variables have correlations of 0.40– 0.50 whereas the correlations for Mexican macroeconomic indicators vary from about -0.23 to – 0.30. (See Detailed Tables 5a-5b.) These patterns suggest that during this period the “pull” factors have been somewhat more powerful than the “push” factors in determining short-term migration levels.

The Mexican economy underwent a severe crisis in 1995 that produced a dramatic 6.2% drop in the country’s gross domestic product (GDP) that year (Detailed Table 5b). By the time migration levels peaked in 1999 and 2000, the Mexican economy was in a full-blown expansion phase, registering 6.6% GDP growth in 2000. Although the economy recovered quickly, the migration impact of a sharp downturn can stretch out as discouragement gradually produces decisions to seek work in another country. Moreover, the expansion’s impact on migration was somewhat muted because productivity gains in Mexico outpaced job creation. As a result, even when it was growing robustly at the end of the decade, the Mexican economy was not generating enough jobs to absorb all new entrants to the labor market. Following 2001, the Mexican economy experienced a downturn in sync with the U.S. economy. Indeed, with much of its economy linked to the U.S. market under the North American Free Trade Agreement, Mexico’s business cycle now very clearly mirrors trends in the U.S. economy.

Macro-economic trends alone do not determine migration flows. A variety of other factors also influence the number of people moving from one place to another, and these can include everything from border controls in a receiving country to agricultural support policies in a sending country. An overarching factor is the operation of family networks that link migrants to relatives left behind. These networks can greatly facilitate new migration by providing access to housing, information about work opportunities and the comfort of familiar faces in a new land. The annual migration flows to the United States, particularly those from Mexico, suggest that all of these factors, especially family networks, combine to create the conditions for the high and increasing levels of immigration recorded for more than two decades. Specific economic circumstances such as the U.S. boom of the late 1990s and the subsequent downturn can then provide the stimuli for specific and contained fluctuations in migration levels of the sort described here. 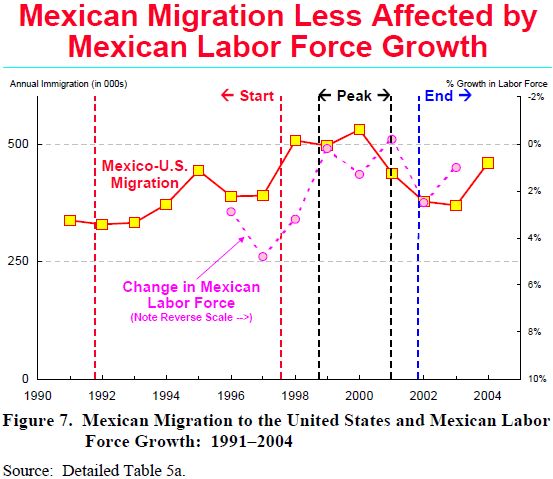