Another significant shift occurred in the destinations of immigrants within the United States. The well-documented shift of new immigrants away from traditional settlement areas, such as California and New York, and to the so-called “new growth” states3 (Passel et al. 2002, Kochhar et al. 2005) is quite apparent in these data, as the share going to these two large states dropped from 37% in the mid-1990s to about 30% at the circa-2000 peak (Detailed Table 1c and Figure 5). The changes over time were certainly not uniform among the major receiving states. California and New York lost significant shares of the immigrant inflow between 1992 and 2004. New York was unique among these states in that it did not experience the 1999–2000 peak and actually had less immigration than in 1992–1997; immigration to New York continued to fall after 2000. Florida and Texas received slightly larger shares of the immigrant flow in 2002– 2004 than in 1992–1997, unlike the other four large receiving states. 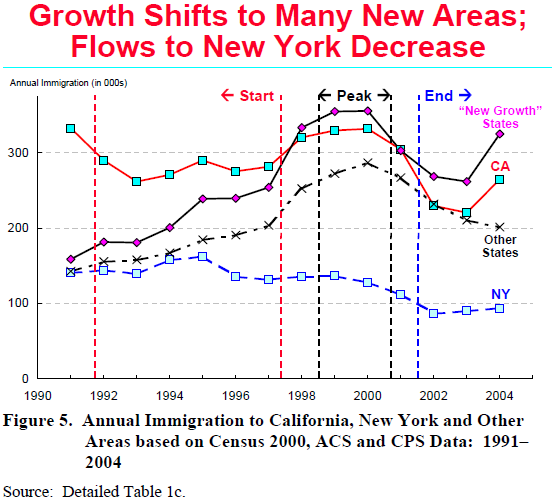 These data point to even further geographic diversification than do many other studies, as states other than the new growth states (the “other states” in Detailed Table 1c) also showed increases in both the share and the number of new immigrants settling there. The “other states” share increased to 18% from 16% in the mid-1990s, representing a growth of 59% in the number of new immigrants going to these states. After the peak period, these other states maintained their increased share of new immigrants. Thus, the shifting of immigrant settlement to new destinations is not just a short-lived phenomenon associated with the peak levels of immigration; it continued even as immigration decreased from the 1999–2000 peak.4