The number of immigrants living in the United States has been increasing steadily since 1970 as measured by the size of the foreign-born population in decennial censuses. Fueled primarily by immigration from Latin America—especially Mexico—and Asia, the foreign-born population grew from 9.6 million in 1970 to 19.8 million in 1990. In the last decade of the 20th century the numbers jumped dramatically by 57% to 31.1 million in Census 2000. Data from the Census Bureau’s Current Population Surveys (CPS) and other sources indicated that much of the growth in the 1990s took place in the second half of the decade. But significant questions remained: How much did the immigration flow increase in the late 1990s? After 2000, did the number of migrants added to the population every year continue to increase, level off or decline? And, more important, is there a basic long-term trend that produces steady year-to-year increases in the flow of migrants? Or, alternatively, are immigration flows variable from year to year and subject to factors, such as the condition of the U.S. economy, that cause them to increase or decline? How the volume of immigration has changed in the face of the dramatic economic swings of the past decade, the reactions to September 11 in terms of popular attitudes and official enforcement efforts, and attempts to tighten U.S. borders and admission procedures is not easy to address with standard measures of immigration.

To address these issues, the Pew Hispanic Center analyzed data from several sources collected by the Census Bureau and developed estimates of the number of foreign-born persons flowing into the country on a yearly basis for 1992 to 2004. (See “Measurement Methods” below.) These figures must be considered approximations of the true level of immigration since they represent averages across several data years, several different measures, and multiple, repeated measures for some of the methodologies used. Although data sources produced different numbers for the flow in a given year, all the sources yielded the same general pattern of change over the period: Immigration flows increased gradually through most of the 1990s, spiked dramatically at the end of the decade and then fell back after 2001 to the levels registered in the mid-1990s.

The spike was significant both in absolute numbers and in percentage change. The peak immigration flows in 1999 and 2000 reached at least 1.5 million people a year (1.8 million by some measures), roughly 400,000 more than the troughs before and after. (See Figure 1 and Summary Table A.) In retrospect, it is now clear that the surge in immigration flows that occurred at the end of the 1990s was a discrete event with a beginning, middle and end. The extremely high flows at the end of the past decade were not the norm, nor part of a long-term trend, but rather the peak of a momentary increase that lasted for only a few years. Thus, even as the United States consistently experiences historically high rates of migration, flows are subject to considerable variation. If levels surge again, the change will mark a new episode in the long saga of immigration into the United States, and so too if they decline sharply.

As will be detailed below, both the increases and decreases in migration flows over the past 15 years coincided with sharp changes in the U.S. economy. Immigration increased rapidly as the United States experienced a record expansion at the end of the 1990s, and the flows dropped after 2001 as the U.S. economy went into a prolonged downturn. As economic growth resumed in 2003 and 2004, migration levels showed signs of increasing again. This same basic pattern held true for migration flows from every region of the world as immigrants came at roughly the same pace from countries and regions that were experiencing economic booms and those undergoing hard times. The correlation of U.S. economic trends to migration levels rather than the trends in immigrant-sending countries clearly suggests that the demand for immigrant labor in the United States is a powerful factor is determining migration flows. Just as the U.S. economy experiences distinct episodes of expansion and contraction, migration levels can also be expected to rise and fall with them. 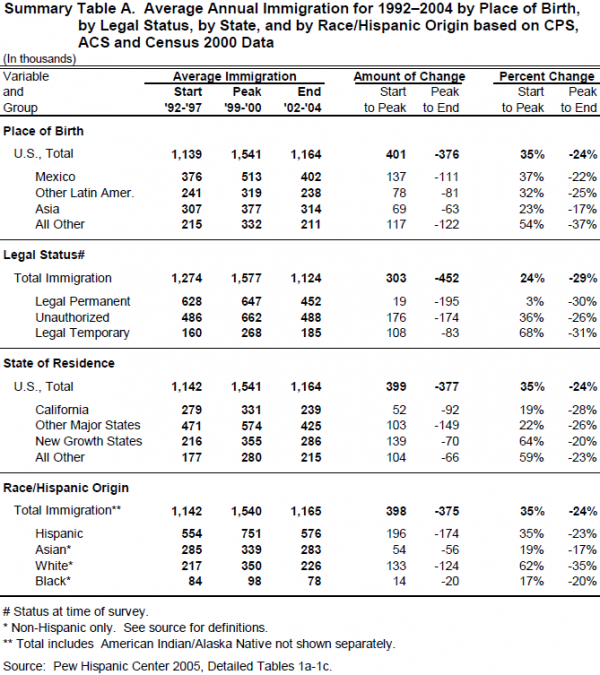 Next: III. The Migration Flow Peaked in 1999–2000
← Prev Page
Page1You are reading page2Page3Page4Page5Page6Page7Page8Page9
Next Page →