Hispanics maintained their role as a primary force of change in the labor market as the economic recovery gathered momentum in 2004. Both Hispanics and non-Hispanics scored gains in 2004 as total employment increased by 2.5 million workers. In absolute terms, the increase in the number employed for non-Latinos was more than for Latinos, and the reduction in the number unemployed was also greater for non-Latinos in 2004. That is as expected since non- Hispanics outnumber Hispanics in the labor force by a margin of nearly seven-to-one. Surprisingly, it was the first time since 2000 that the absolute gain in employment for non- Hispanics has exceeded the absolute gain for Hispanics. Nonetheless, the pace of growth in Latino employment continues to be much faster and the fall in the unemployment rate was also greater among Hispanic workers.

The latest tabulations by the Pew Hispanic Center show large increases in the numbers of employed workers during 2004. As shown in Table 1, the improved conditions in the labor market in 2004 translated into jobs for an additional 1 million Hispanic workers between the fourth quarters of 2003 and 2004.7 This was an increase of 6 percent in the space of one year. The increase in Latino employment over the course of this period slightly exceeded the growth in the Latino labor force. Thus, in the year ending in the fourth quarter of 2004, the number of unemployed Hispanic workers decreased by 48,000 and the unemployment rate for Hispanics declined from 7.1 percent to 6.5 percent. 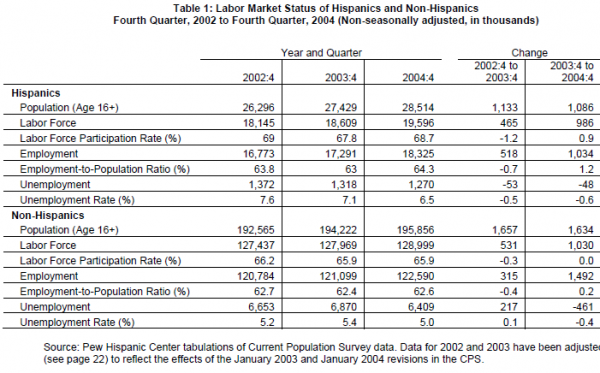 Next: IV. Changes in Employment by Nativity and Period of Arrival
← Prev Page
Page1Page2You are reading page3Page4Page5Page6Page7Page8Page9
Next Page →