Most of the survey respondents (54%) said they spoke little or no English. This appears to reflect the large share of recently arrived migrants in the sample. The survey findings suggest that a significant level of English acquisition takes place within a few years for many newcomers but that nonetheless substantial numbers of migrants have very limited English skills even after spending several years in the United States. 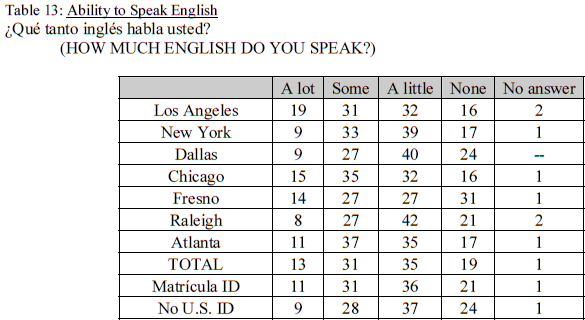 In the survey, English language abilities increased notably with the amount of time the respondent had spent in the United States. For example, fewer than a third (31%) of respondents who had been in the country for five years of less said they could speak a lot of English or some English compared with more than half (54%) of those who had been in the country for six to ten years. This contrast is significant because these two groups have roughly similar educational characteristics. Respondents who have been in the country 11 to 15 years have the same education profile, and 59 percent of them said they spoke a lot of English or some English. This suggests that most of the gain in English ability occurs early in the respondent’s tenure in the United States.

As the discussion above would suggest, a substantial share of the respondents reported very limited ability in English even after they had been in the country for a decade or more. Among respondents who had been in the United States for longer than a decade 30 percent said they could speak only “a little” (poco) English and 14 percent said they could speak “none” (nada).