Nearly half (47%) of all respondents and nearly two-thirds (61%) of male respondents said they were employed in three industries—hospitality, construction and manufacturing—that play a central role in the U.S. economy.

The extent to which individuals could count on proper identity documents does not appear relevant to the kinds of industries in which respondents found work. Respondents who said they do not have a photo ID issued by a U.S. government agency had roughly the same overall distribution across industries as those who said that they do.

Significant differences are apparent by geography, reflecting the local economies in the seven cities where the survey was conducted. For example, the largest share of respondents employed in the hospitality industry (hotel, restaurants and bars) was in New York City, the share employed in manufacturing was highest in Chicago, and construction was highest in three fast-growing cities, Dallas, Raleigh and Atlanta. Not surprisingly, the Fresno sample produced the one very substantial share of agricultural workers.

A few significant differences emerged in the demographic characteristics of the respondents employed in various industries. Those employed in construction are almost all (95%) male and are younger than the sample overall. Construction workers were also better paid than respondents in other industries, with 35 percent earning $400 a week or more compared with just 17% of those employed in manufacturing and 19% in hospitality. Agricultural workers tended to be older and less educated and a disproportionately large share had been living in the country for more than 15 years. Among those working in domestic service 80 percent were women.

Table 15 Major Industries of Employment
¿En qué industria trabaja principalmente usted ahora aquí en los EE.UU.?
(WHAT IS THE MAIN TYPE OF INDUSTRY YOU NOW WORK AT IN THE U.S.?) 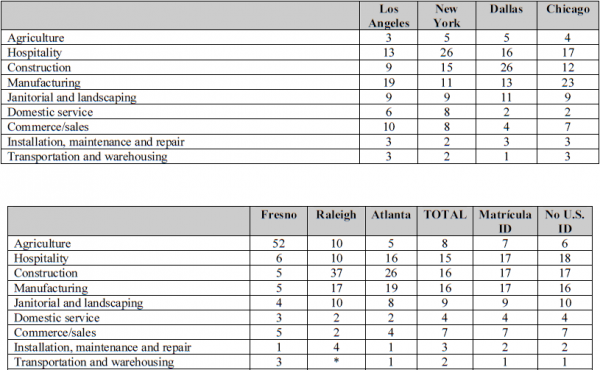 One-third of the survey respondents reported experiencing a period of unemployment that lasted a month or longer over the past year. Not surprisingly this was a greater problem for those earning very low incomes than for those with comparatively higher earnings. More than half (55%) of those making less than $200 a week reported problems with unemployment compared with less than a fifth (19%) of those earning $400 or more a week. No significant differences in this regard were evident by age or by time in the country. Respondents who said they lacked a U.S.-issued photo ID did not report higher levels of unemployment than those who said they had such documents.

Despite these difficulties, the survey respondents have very high levels of participation in the labor marker. Only 10 percent of the respondents said they did not work in the United States, and in this regard there were significant differences by gender—3 percent for males and 21 percent for females.

Next: X. The Matrícula Consular
← Prev Page
Page2Page3Page4Page5Page6Page7Page8You are reading page9Page10Page11Page12
Next Page →