Data from the 2002 National Survey of Latinos allows comparisons of the views and experiences of Latinos living in five states with large Latino populations: California, Texas, New York, New Jersey, and Florida. Nearly seven in ten Latinos in the United States live in these five states, with the largest populations residing in California (31% of Latinos in the United States) and Texas (19%), followed by New York (8%), Florida (8%), and New Jersey (3%) (Chart 1).

The significance of country of origin

Country of origin, or the birthplace of Latinos and their ancestors, is one of the biggest differentiators between the Latino populations in California, Texas, New York, New Jersey, and Florida. As was noted in the report on the major findings of the 2002 National Survey of Latinos, attitudes and experiences diff er among country of origin groups. Because they can diff er so dramatically, it is important to keep in mind the background of the populations we examine in this survey brief, and note that some of the differences could be at least partially attributed to variation in ancestral background. 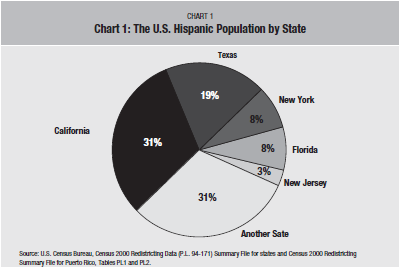 Notable differences between states with regards to country of origin include (see Table 1): 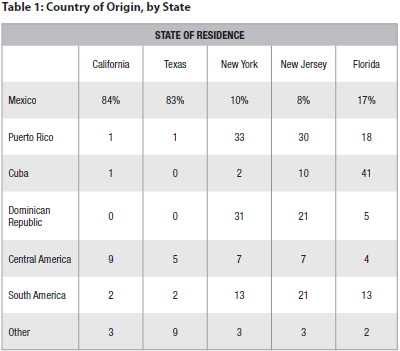 Nearly two thirds (63%) of Latinos in the United States are foreign-born. These are Latinos who were born outside of the fifty states, as well as those who were born in Puerto Rico, a commonwealth associated with the United States. New York (77%), New Jersey (77%), and Florida (76%) have a higher proportion of foreign-born Latinos than California (64%) and Texas (54%). It is also important to note that these states have the largest proportions of Puerto Ricans as well. About three in ten Latinos from New York (33%) and New Jersey (30%) are Puerto Rican, and nearly two in ten (18%) Latinos from Florida are Puerto Rican.

In general, the way Latino populations primarily identify themselves in New York, Florida, New Jersey, and to some extent, California, is very similar (see Table 2). Most Latinos refer to themselves first or only by their country of origin (for example, “Mexican”), while smaller groups primarily call themselves Latinos/Hispanics or Americans.

Latinos across the five states report having had similar experiences with discrimination. Around three in ten Latinos from California (30%), Texas (34%), Florida (27%), New York (28%), and New Jersey (34%) report they, a family member, or a close friend have experienced discrimination during the last five years because of their racial or ethnic background. Similar percentages also report receiving poorer service than other people at restaurants or stores (41% of all Latinos), being called names or insulted (30%), or not being hired or promoted for a job (14%) because of their race or ethnic background.

Although their experiences with discrimination have been similar, Latinos’ attitudes about discrimination diff er among states (see Table 4). The vast majority of Latinos feels that discrimination against Latinos is a problem in schools (75%) and the workplace (78%), and in preventing Latinos in general from succeeding in America (82%). However, Latinos in New York and New Jersey are more likely than Latinos from Florida, Texas, and in some cases California, to feel that discrimination in these areas is a major problem.

Latinos Discriminating Against Other Latinos

Latinos in these states, however, disagree on the main reason this discrimination takes place. Among Latinos who feel Latinos discriminating against other Latinos is a problem, Latinos in Florida (47%), New York (43%), and New Jersey (43%) are more likely than Latinos from California (30%) and Texas (27%) to say the main reason for this discrimination is that Latinos come from different countries. Latinos from California (43%) and Texas (47%) are more likely than Latinos from Florida (36%) and New York (28%) to say the primary reason Latinos discriminate against other Latinos is because of the differences in levels of income and education.

Perhaps the fact that Latinos from these different states disagree on the main reason discrimination takes place reflects the differing demographic makeup of these states. California and Texas are much more homogeneous with respect to country of origin. The vast majority of Latinos in California and Texas is Mexican, compared to the Latino populations in New York, New Jersey, and Florida, where there is much more diversity. Therefore, it is possible that Latinos in California and Texas may interact with Latinos of different backgrounds less often and have less interaction with Latinos from other countries of origin.

Among those who are registered to vote, party affiliation differs by state (see Table 5). Latinos who reside in Florida (42%) are more likely to say they are Republican than Latinos who live in Texas (22%), California (19%), or New York (13%). Registered Latinos in these states, especially those in California (58%) and New York (60%), are more likely to consider themselves Democrats.

Most Latinos in these states agree that they would rather pay higher taxes to support a larger government (60%) than pay lower taxes and have a smaller government (34%). A majority also agrees that the government (52%) can do the best job of providing services to people in need, instead of religious, charitable, or community organizations (40%). Where Latinos in these states diff er, however, is on their trust in the federal government (see Table 6). Latinos in Florida are the most trusting in government, with nearly six in ten (59%) trusting the government to do what is right just about always or most of the time. Half of Latinos from Texas agree, followed by 45% of Latinos from New Jersey, 40% from California, and 37% from New York.

These differences in provenance and nativity appear to underlie many of the differences in opinion and experience seen between the populations of these five states, including how Latinos chose to identify themselves, foreign-born Latinos connection with their country of birth, and the perceived reasons behind discrimination. However, as pointed out earlier, most Latinos are U.S. citizens and thus, eligible to vote. Therefore, especially as the Latino population continues to grow, it is important to explore these regional differences in the Latino population because they may increasingly affect the outcomes of local and state elections. 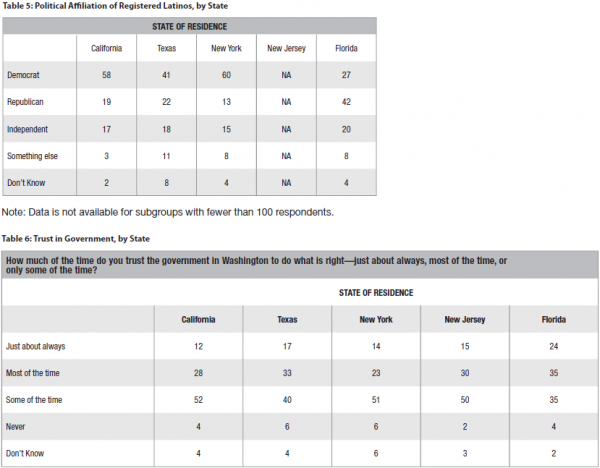 The sample design employed a highly stratified disproportionate RDD sample of the 48 contiguous states, including oversamples for Salvadorans, Dominicans, Colombians, and Cubans. The results are weighted to represent the actual distribution of adults throughout the United States. The Latino sample, in particular, was weighted to reflect the actual distribution among Latino adults of country of origin, age, sex, and region.

Of those who were interviewed, 2,929 identified themselves as being of Hispanic or Latin origin or descent (based on the question “Are you, yourself of Hispanic or Latin origin or descent, such as Mexican, Puerto Rican, Cuban, Dominican, Central or South American, Caribbean or some other Latin background?”). Throughout this report, they will be referred to interchangeably as either “Latinos” or “Hispanics.” In addition, interviews were conducted with 1,008 non- Hispanic whites and 171 non-Hispanic African Americans. The margin of sampling error is +/- 2.41 percentage points for Latinos overall. The sample sizes and margins of error for the different state groups are shown in the table below. The report also highlights results for other subgroups of Latinos. Please see the introduction of the report for definitions, sample sizes, and margins of sampling error for these key groups.