In 2017, Pew Research Center and Körber-Stiftung began collaborating on joint public opinion surveys to gauge the state of relations between the United States and Germany. The questions were developed together, and each organization fielded a survey within its own country starting that year. Some of the questions have been repeated annually to allow both organizations to track attitudes over time. Topics include relations with other countries, the state of the transatlantic partnership on a variety of foreign policy issues, views of China, Russia and the state of international relations. This year, questions about the coronavirus pandemic were also asked.

The results have been published in both countries, and the previous reports from Pew Research Center can be found here for May 2020, March 2020, 2019 and 2018.

The Körber-Stiftung findings are contained within their larger “Berlin Pulse” report and can be found here for 2020, 2019 and 2018.

Here are the questions used for this report, along with the responses, and its U.S. survey methodology.

As the United States and Germany prepare to gain new leadership in 2021, their current relationship remains unbalanced in the minds of their citizenries. In surveys conducted by Pew Research Center and Körber-Stiftung before the U.S. presidential election, an overwhelming majority of Americans continue to say that relations between the two countries are good. 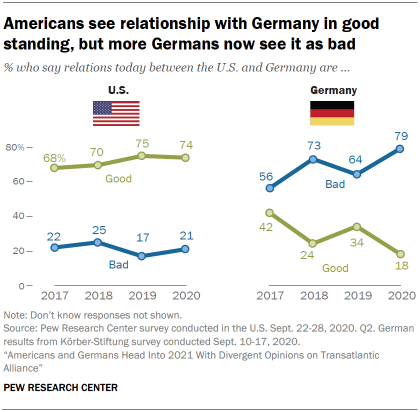 At the same time, almost eight-in-ten Germans say the relationship is in poor shape. Since 2017, the proportion of Germans saying that relations with the U.S. are bad has increased 23 percentage points, while Americans’ views of the relationship have remained relatively steady. These findings are in line with previous research, which found that Germans rated the U.S. at a 20-year low, said the U.S. had handled the coronavirus outbreak poorly and held little confidence in President Donald Trump. 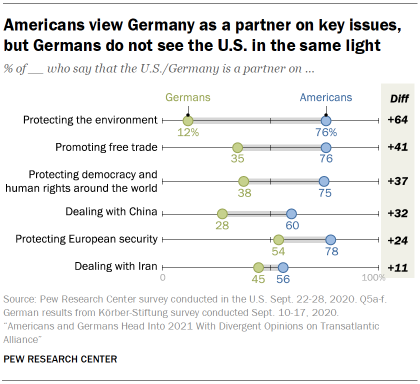 In addition, Americans tend to see Germany as a partner on key issues, such as protecting the environment, promoting free trade, democracy and human rights, ensuring European security, and dealing with China and Iran. But few Germans see the U.S. as a partner on most of these pressing issues.

Looking toward the future, most Americans view a Cold War-type conflict between the U.S. and China as likely, while Germans are almost equally divided on this prospect. Americans are also fragmented on the state of international cooperation after the coronavirus pandemic, with roughly equal numbers saying that countries will cooperate more (30%), countries will focus more on their national interests (35%) and international cooperation will not change (33%). A plurality of Germans (46%) think countries will cooperate more after COVID-19. 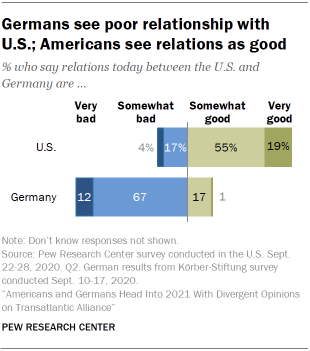 Americans’ and Germans’ views of the relationship between their two countries remain sharply divergent. Americans continue to be rosy in their views of their country’s relationship with Germany, with nearly three-quarters saying that relations are good. Nearly two-in-ten Americans say that the relationship is very good (19%), the largest share in four years of polling and up 6 percentage points from 2019.

Among Germans, 79% say that the relationship with the U.S. is bad, a 15 percentage point increase in those saying this since 2019 and the highest negative sentiment in four years of surveys. The share of Germans who say that relations with the U.S. are good is at a mere 18%, the lowest point measured over the same time.

As was the case in previous surveys, younger Germans are more likely to have a positive view of the U.S.-Germany relationship. Still, only 29% of people ages 18 to 34 in Germany say that the relationship with the U.S. is good, compared with even fewer – 14% – among those 50 and older.

Germans do not see the U.S. as a partner on key issues, but Americans do see Germany as one 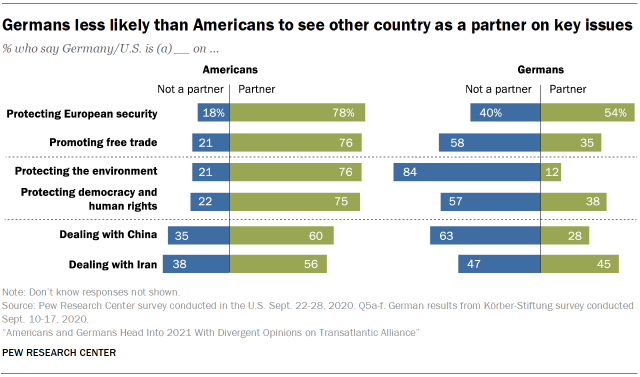 Only on protecting European security do more than half of Germans say that the U.S. is a partner, despite the Trump administration’s announcement in July 2020 that it would withdraw 12,000 troops from Germany. And, while Merkel urged the U.S. to rejoin the Joint Comprehensive Plan of Action (JPCOA) after Trump withdrew from it in 2018, the German public remains nearly even on whether or not the U.S. is a partner when it comes to dealing with Iran. 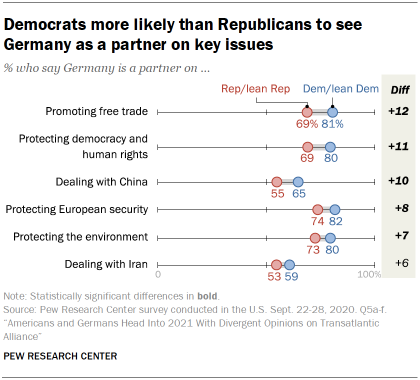 While Germans of all ages do not see the U.S. as a partner on these issues, a majority of younger Germans (ages 18 to 34) say that the U.S. is a partner when it comes to dealing with Iran and protecting European security. This compares with only a third of those 65 and older who say the same about Iran. In the U.S., younger Americans are more likely to see Germany as a partner on dealing with the environment and China.

German sentiment on whether or not the U.S. is a partner on these issues is mostly in line with the findings of a 2019 survey that found Germans disapproved of Trump’s signature foreign policies.

Democrats and Democratic-leaning independents are more likely than their Republican counterparts to say that Germany is a partner on each issue tested, except on dealing with Iran. The differences are largest on questions about the traditional American foreign policy goals of promoting free trade and protecting democracy and human rights.

In both the U.S. and Germany, just one-in-ten name the other country as their own nation’s most important foreign policy partner. And Germans and Americans differ sharply when it comes to which country is their preferred partner.

Americans by and large say that the United Kingdom is the preeminent foreign partner, with 27% mentioning the UK as the most important foreign policy partner. A further 14% of Americans name China and 10% say Israel. 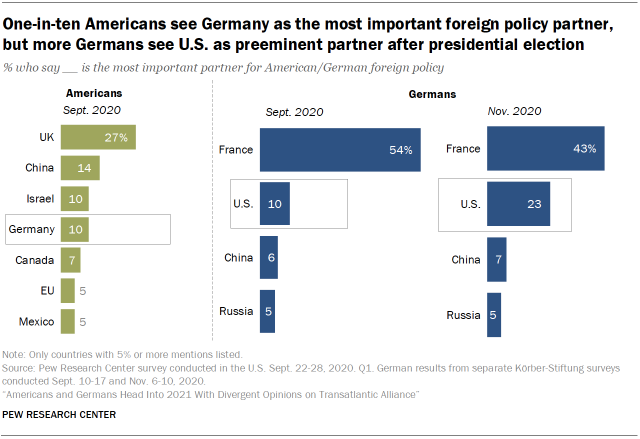 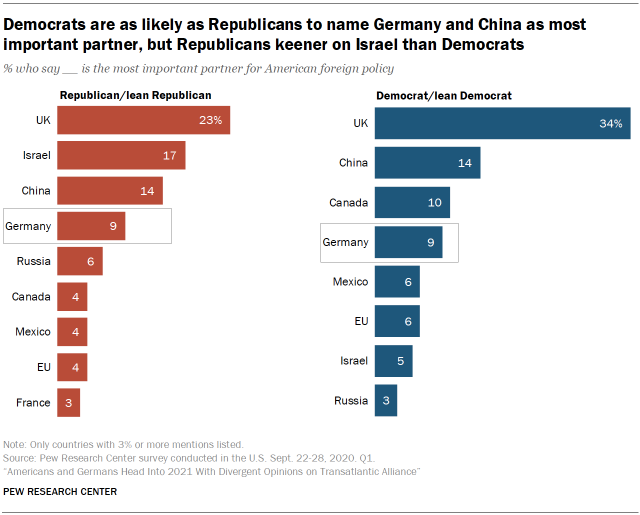 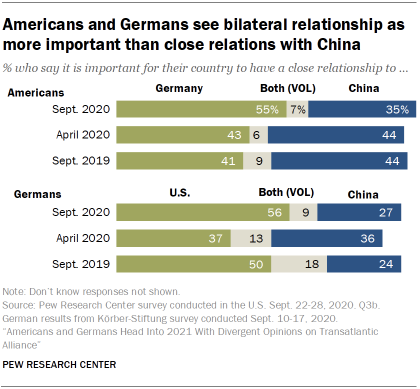 While many Americans and Germans name China as the most important partner, negative attitudes toward the Asian superpower have increased in both countries over the past year. The two publics have also become more likely to prioritize U.S.-German ties over relations with China. In the September 2020 survey, 55% of Americans prefer to have a close relationship with Germany rather than China (35%). This is a significant change from just April of this year, when 44% wanted a close relationship with Germany and 43% wanted the same with China. 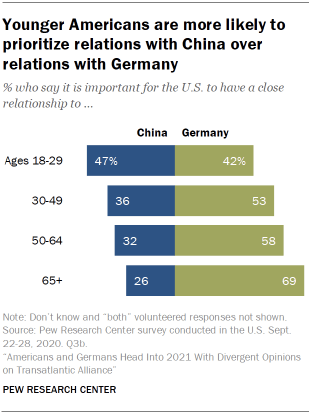 Despite the overall sentiment in the U.S. that favors a stronger relationship with Germany, younger Americans are more divided. About four-in-ten of those ages 18 to 29 say it is more important to have a close relationship with Germany, compared with 47% who say the same about China. Older Americans are much more likely to prefer Germany over China. In general, various Pew Research Center surveys have shown older people in the U.S., Germany and elsewhere across advanced economies have more negative views of China. 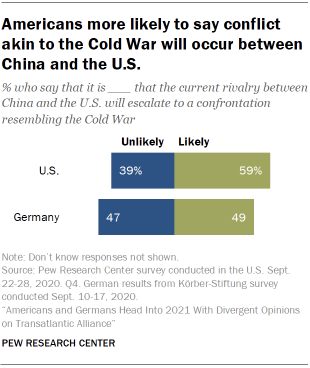 When it comes to the current rivalry between the U.S. and China, Germans and Americans are in slight disagreement on whether a conflict akin to the Cold War will occur. A majority of Americans (59%) think the U.S.-China rivalry will escalate into something like the Cold War between the U.S. and the Soviet Union that dominated geopolitics from the end of World War II until the collapse of the USSR in the early 1990s. Around four-in-ten Americans say this is unlikely.

Germans are almost equally divided on this hypothetical scenario. About half (49%) say a Cold War-like confrontation is likely, while 47% say it is unlikely. 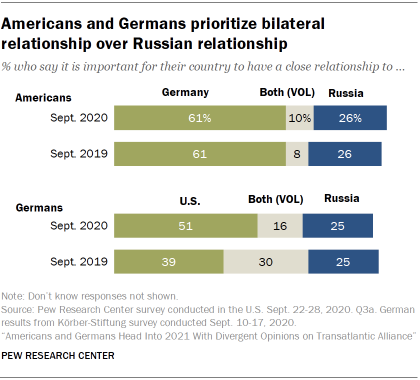 When it comes to each country’s relationship with Russia, both Americans and Germans agree it is better to maintain the bilateral relationship than to be close with Russia. But compared with 2019, more Germans express a desire to be closer with the U.S. than with Russia, when roughly four-in-ten chose the U.S. and three-in-ten volunteered “both.”

On this question, older Americans are again more sanguine toward Germany than younger generations. Republicans and Republican-leaning independents are slightly more likely to want better relations with Russia than Democrats and Democratic-leaning independents (28% vs. 21%). Democrats, meanwhile, are slightly more positive on the German relationship than Republicans (67% and 58%, respectively). And those in the former East Germany are more likely to want closer relations with Russia (38%) than those in the former West (21%). 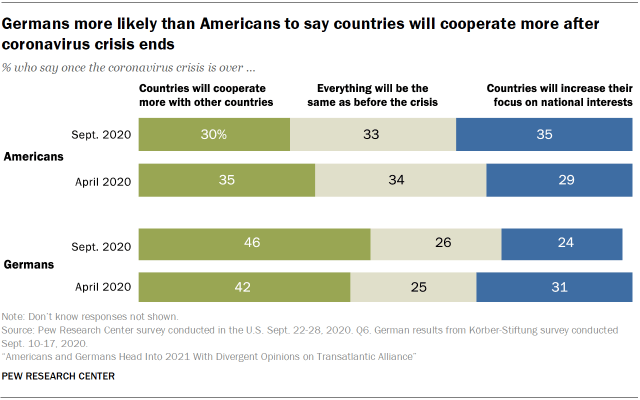 On the other hand, the belief that countries will become more insular is slightly up among Americans, rising to 35% from 29%.

In the U.S., Republicans (40%) are more likely than Democrats (29%) to say that international relations will remain the same once the crisis is over. The opposite is true when it comes to cooperation, with 24% of Republicans saying they expect greater cooperation between countries, while 34% of Democrats say this.

Americans and Germans Head Into 2021 With Divergent Opinions on Transatlantic Alliance
The American-German bilateral relationshipGermans do not see the U.S. as a partner on key issues, but Americans do see Germany as oneAmericans’ and Germans’ perceptions of foreign policy partnersGermans say international cooperation will increase after coronavirus, Americans split
Acknowledgments Methodology