Generally, most non-European countries see the United States as the world’s leading economic power, while those in Europe tend to name China. For example, in the Asia-Pacific countries surveyed, a median of 46% say the U.S. is the top economy, while a 25% median say the same about China. Across many of these countries, too, there is little ambiguity about which country is dominant, with double-digit differences between the shares who choose the U.S. and who choose China as the top economy. This is most extreme in South Korea, where there is a 70 percentage point difference between those who cite American economic supremacy (82%) and Chinese dominance (12%). South Koreans are also more likely to name the U.S. as the world’s leading economy this year compared with last year (up 15 percentage points). Within the region, Indonesians and Australians stand out for being more likely to choose China as the leading global economy, though Indonesians are somewhat divided (21% U.S., 24% China) and about as many of them name Japan (22%) as the leading economy.

Across the Middle East and North Africa, majorities or pluralities consider the U.S. to be the world’s leading economy. In Israel, six-in-ten hold this view, and about half say the same in Turkey and Tunisia (49% and 47%, respectively). The U.S. and China are tied in Lebanon, with a third naming each as the top economy. In Tunisia and Israel, the belief that the U.S. is the dominant economic power grew by double digits from 2018 (up 12 and 10 points, respectively).

Likewise, more see the U.S. than China as the top economy in all three sub-Saharan African countries surveyed, though the publics are largely divided. In Nigeria and South Africa, the tendency to name the U.S. is a departure from last year, when more in both countries named China as the world’s top economic power.

The U.S. remains the top choice for all three Latin American countries surveyed. However, roughly a third still name China as the top economy in Mexico and Argentina, and this share has gone up by 6 percentage points in Argentina since 2018. 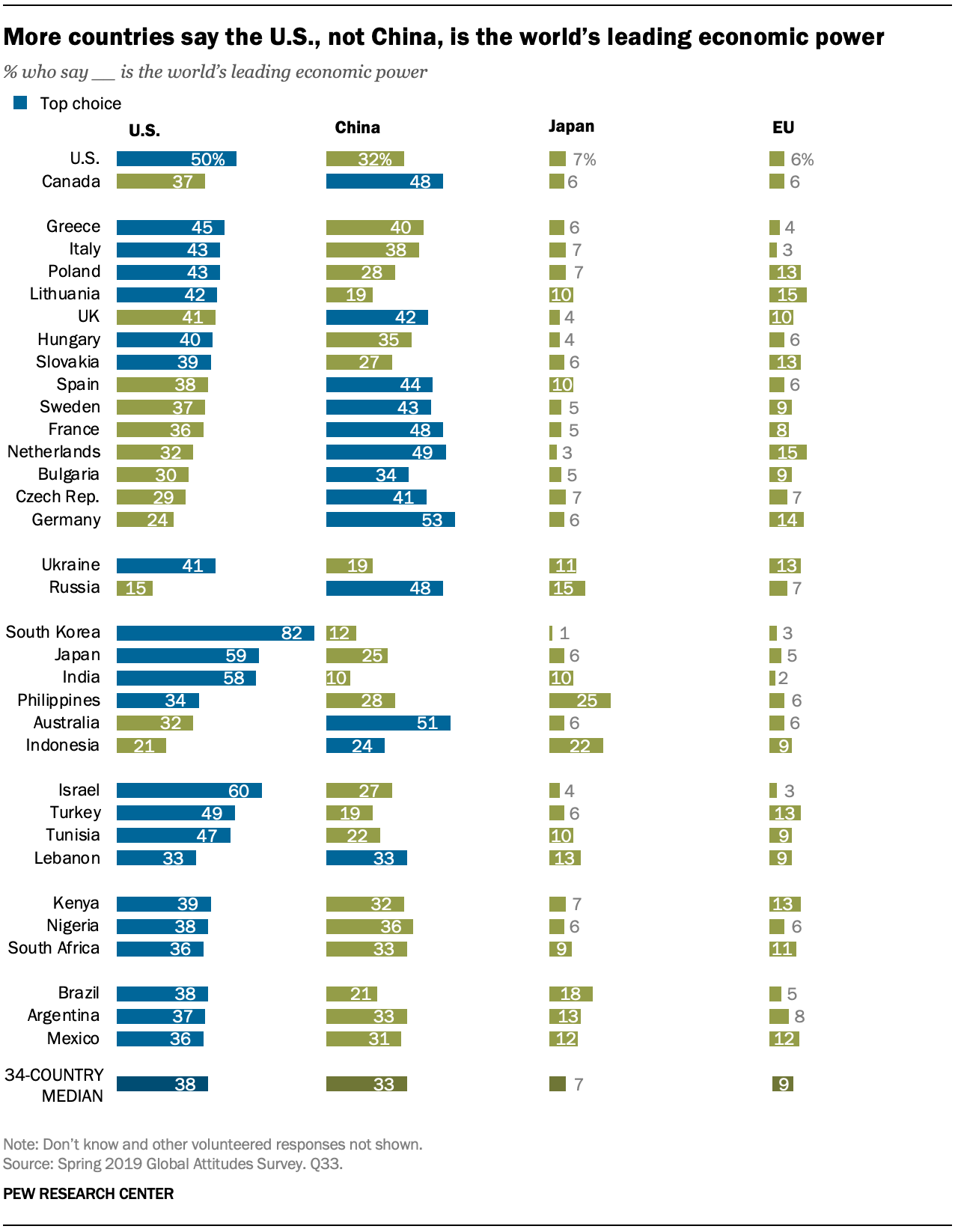 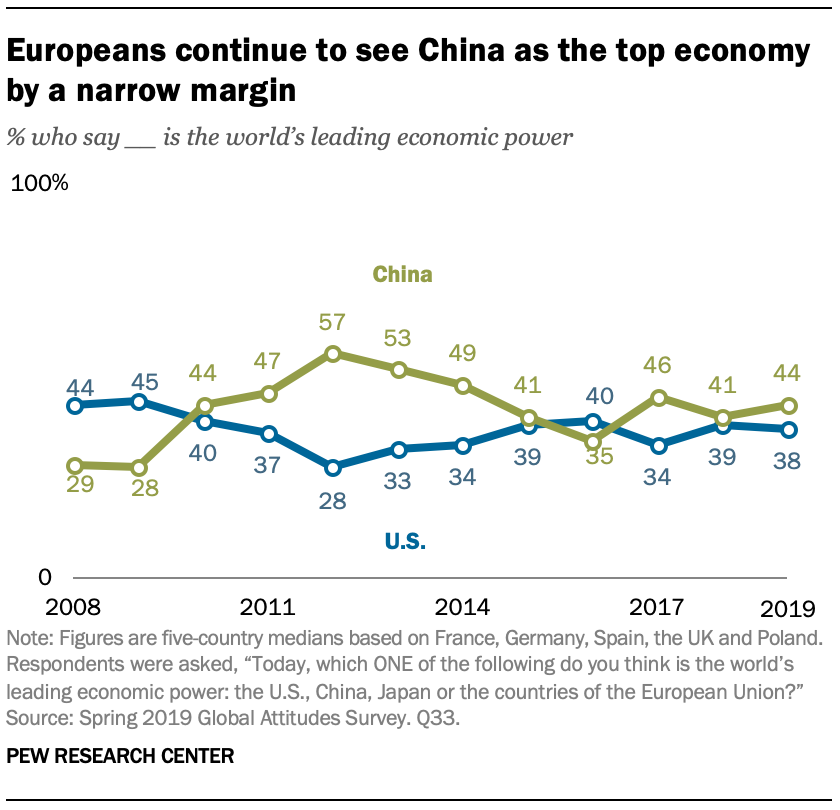 Only in Europe do more countries name China as the world’s leading economy. A median of 41% across the 14 EU member nations surveyed name China, compared with a median of 39% who say the same about the United States. China’s lead over the U.S. is especially clear in Germany, the Netherlands, the Czech Republic and France, where people are at least 10 percentage points more likely to see China as the leading economy. In France, the share that views China as the top economic power has increased by 7 percentage points since 2018, flipping the top choice from the U.S. to China. Spaniards, Swedes and Bulgarians are more muted, with about 5-point differences in their evaluations of the two economies. Those in the UK are about equally likely to point to China or the U.S. as the top economy (42% vs. 41%). In five European countries that have consistently been asked which economy is strongest over the past decade – France, Germany, Spain, the UK and Poland – China has come out on top more often than not.

Still, Lithuanians are 23 percentage points more likely to see the U.S. as the top economy. Poles and Slovaks are also at least 10 points more likely to choose the U.S. over China. Greeks, Italians, and Hungarians similarly evaluate the U.S. economy as more powerful than the Chinese economy, but by a slimmer margin (5 points in all three countries).

Opinions in Russia and Ukraine are divided. Ukrainians say the U.S. is dominant by a margin of 22 points, while Russians choose China by 33 points. For Russians, this is a 14-point increase in the share who chose China in 2018, and a continuation of a steady upward trend in the share that see China as the world’s leading economy.

Majorities in most countries see both U.S. and China heavily influencing their domestic economies 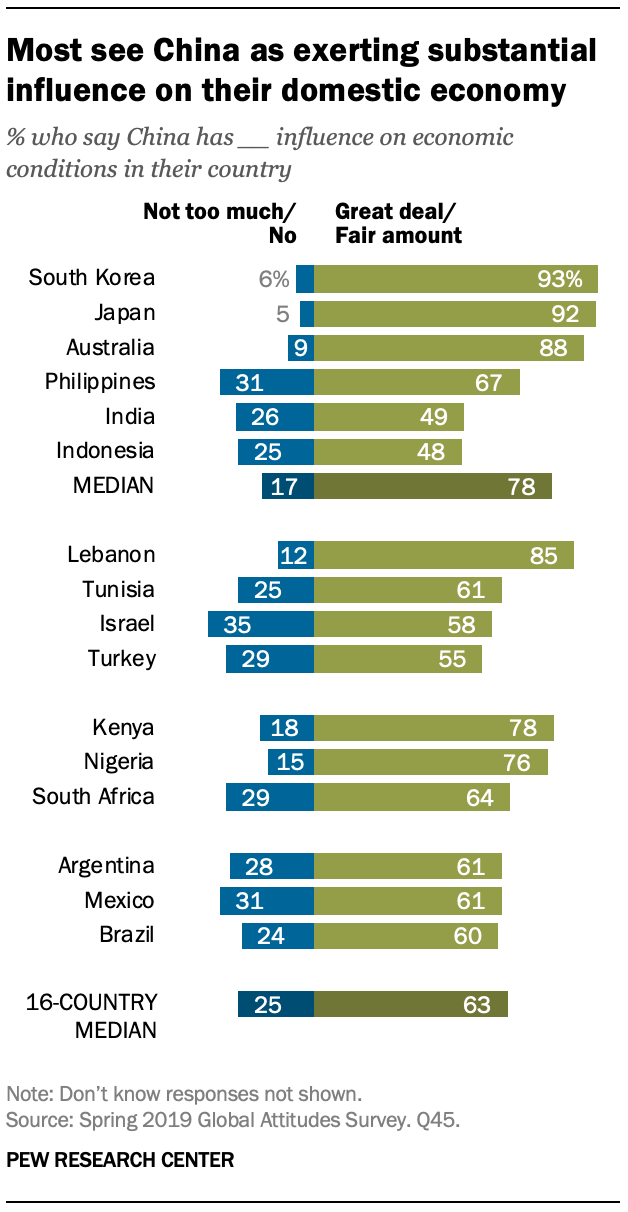 In the Asia-Pacific countries surveyed, South Koreans, Japanese and Australians are especially likely to say China has a great deal or fair amount of influence on their country’s economy, with about nine-in-ten or more holding this opinion. Lebanon also stands out in the Middle East, as 85% say China has at least a fair amount of influence on Lebanese economic conditions.

Roughly three-quarters in Kenya and Nigeria say the same, while about six-in-ten see at least a fair amount of Chinese influence on their domestic economies in the three Latin American countries surveyed. 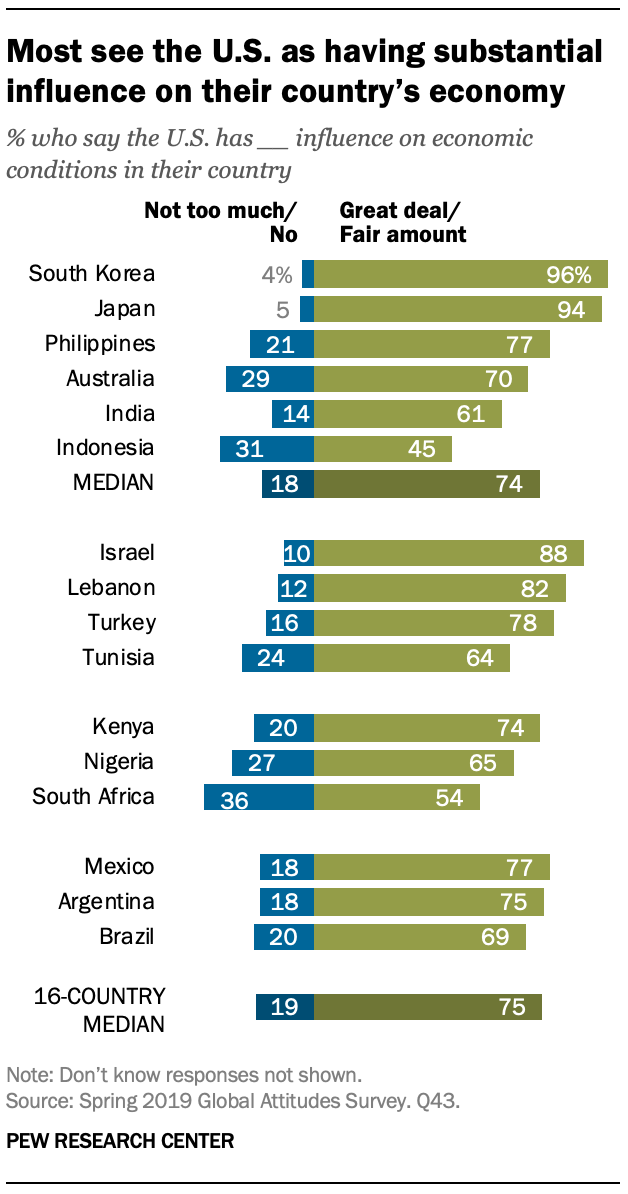 Across these same 16 countries, a median of 75% say the U.S. has a great deal or fair amount of influence on economic conditions in their country, compared with a median of 19% who say it has little or no influence.

Perceived influence is highest in South Korea (96%), Japan (94%) and Israel (88%), and lowest in Indonesia – the only country where fewer than half (45%) say the U.S. plays a large role in their economic affairs.

When comparing the two superpowers, by a slim margin, more people in the Asia-Pacific region say China plays a large role in their country’s economic conditions (six-country median of 78%) than say the same of the U.S. (74%). But in South Korea and Japan, upwards of nine-in-ten say both superpowers have a great deal of influence. Indians and Filipinos are about 10 percentage points more likely to see American influence on their economies, while those in Australia are 18 points more likely to see China’s muscle.

And, in the Middle East and North Africa, those in Israel and Turkey are more likely to identify influence from the U.S., with a difference of about 20 points or more. Those in Lebanon and Tunisia are about as likely to say the U.S. or China have a great deal or fair amount of influence.

More describe Chinese influence on economy as positive than say the same of U.S. influence 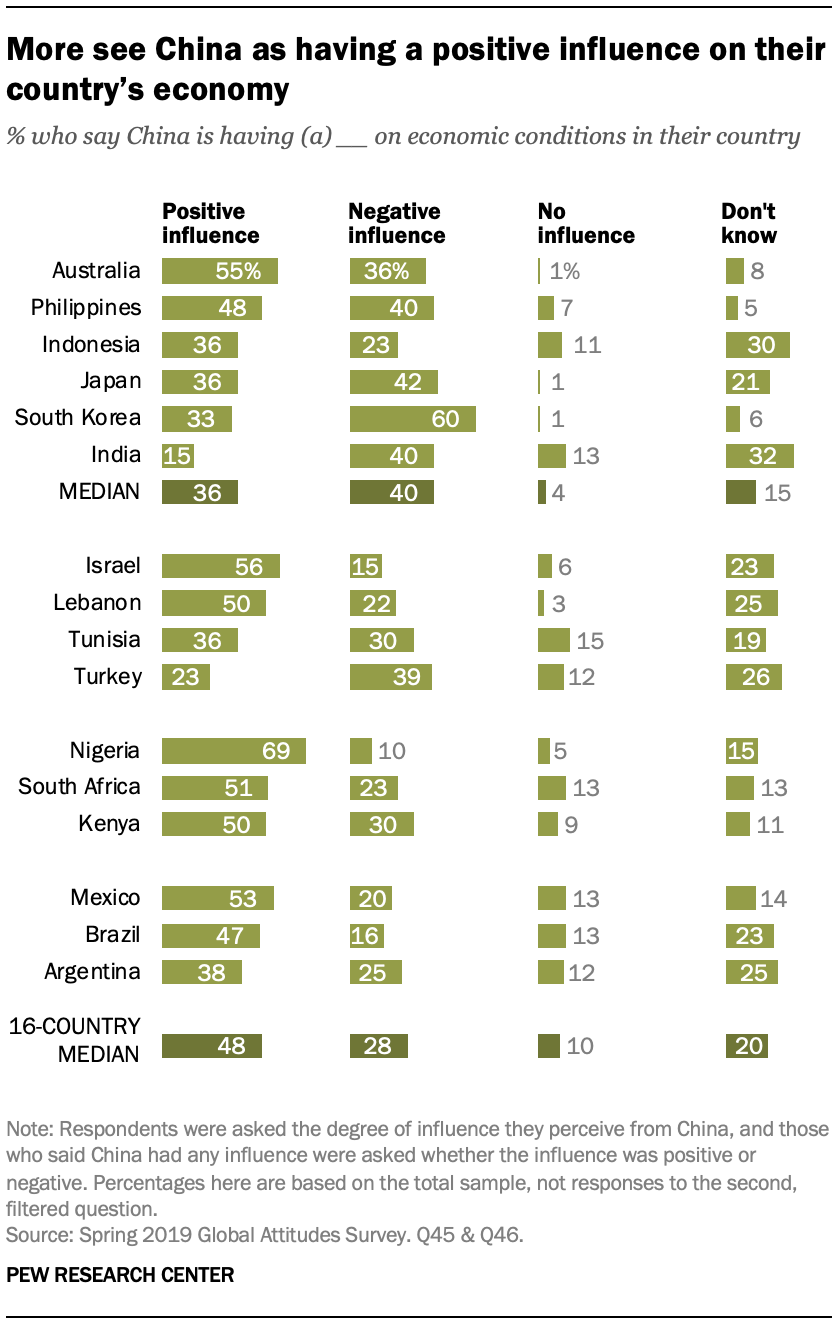 People who said that China or the U.S. had at least some influence on economic conditions of their country were also asked to rate that influence as either positive of negative.

Opinions elsewhere are more clear-cut. Majorities in the sub-Saharan African countries surveyed say Chinese influence is positive, especially in Nigeria, where about seven-in-ten hold this opinion. About four-in-ten or more see Chinese influence positively in the Latin American nations surveyed as well.

Substantial minorities in most countries did not offer any opinion of China’s influence. 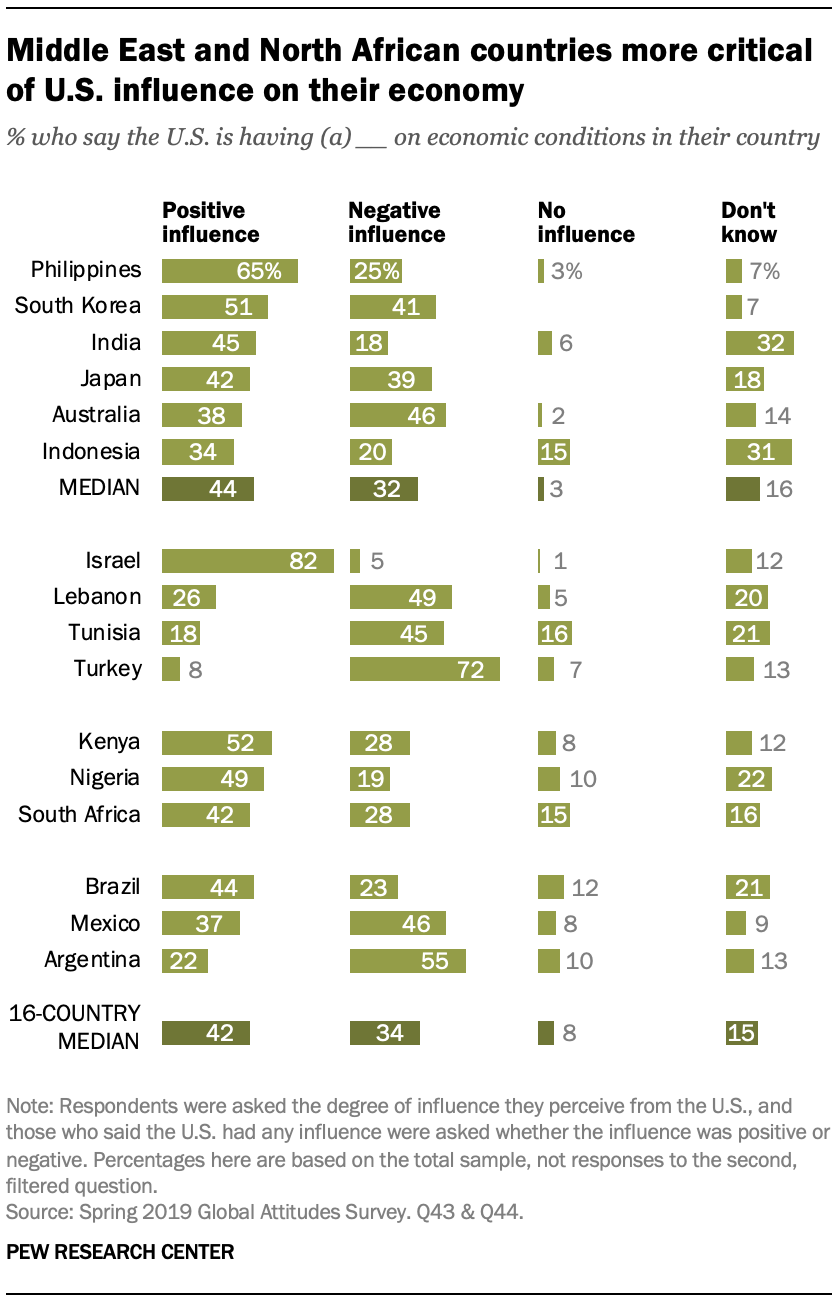 When it comes to American influence, evaluations are somewhat less positive; a median of 42% rate it positively, while 34% say the U.S. is having more of a negative influence on economic conditions in their country.

Across the Middle East and North African countries surveyed, most publics are more likely to see U.S. economic influence unfavorably, even as Israelis almost uniformly describe America’s role as good (82% positive). In Turkey especially, about three-quarters say the U.S. has a negative influence on their domestic economic conditions. Those in Lebanon and Tunisia are at least 20 points more likely to see the influence as negative.

More in the three sub-Saharan countries surveyed say the U.S. has a positive economic influence than say it has a negative influence. Still, substantial minorities of around one-in-five or more describe it negatively. And opinion is mixed in the three Latin American countries surveyed, with Brazilians largely describing the American role favorably (44%) and Argentines and Mexicans saying the opposite (55% and 46% negative, respectively).

When directly comparing the perceived positive influence from the U.S. and China, outside of the Asia-Pacific region, Chinese economic influence is largely seen in more positive terms than American influence. For example, across three of the Middle East and North African countries surveyed, people are substantially more likely to describe China’s role in their economy in positive terms than they are America’s role. In Lebanon, about twice as many say China is having a good influence (50%) than say the same of the U.S. (26%). Most in sub-Saharan Africa and Latin America, too, describe Chinese influence positively, even as substantial numbers in most countries also see U.S. influence positively.

Most say current economic relations with both China and U.S. are good 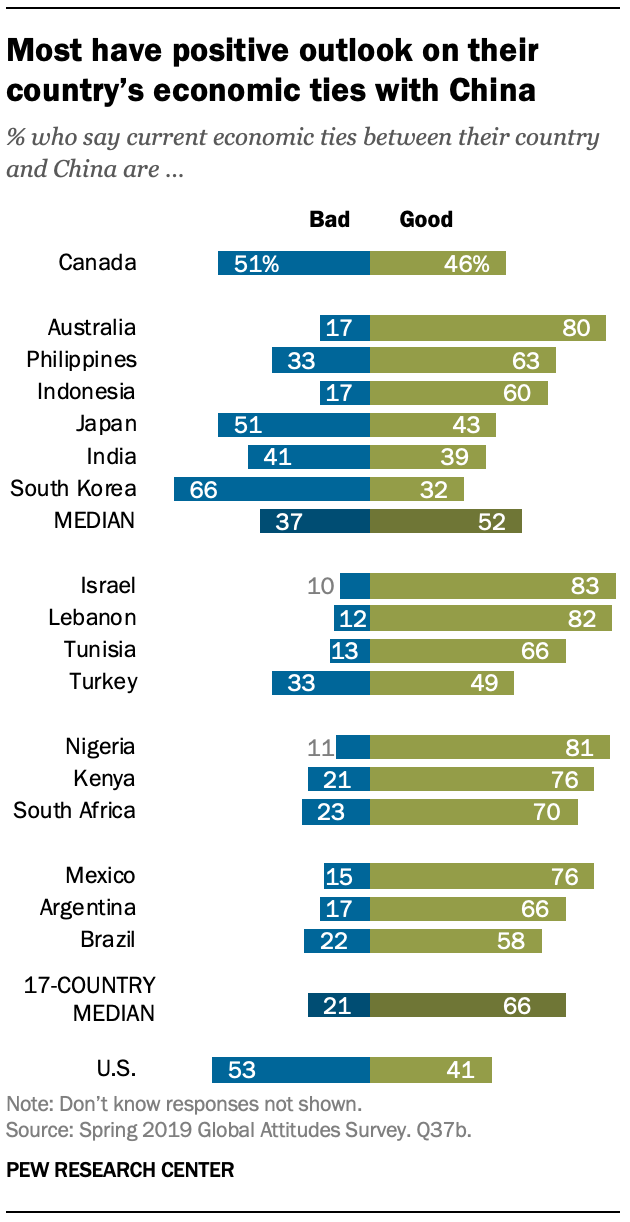 When it comes to the current state of economic relations with China, publics are much more likely to describe them as good (median of 66%) than bad (21%). Outside of Canada, the U.S. and some of the Asia-Pacific countries surveyed, around half or more in every other country see current economic ties positively.

In the wake of major trade disputes and political tensions with China, around half in both the U.S. and Canada describe current bilateral economic relations as poor. In South Korea and Japan, too, 66% and 51%, respectively, say relations are negative.

In the Middle East and North Africa, majorities in all except Turkey say the economic relationship between their country and China is going well. Even in Turkey, about half say the relationship is positive.

Most also say current economic relations with the United States are going well; a median of 64% say relations are in good shape, compared with 23% who say the opposite.

This sense is highest among Israelis, 96% of whom say American-Israeli economic ties are positive. The other Middle East and North African countries surveyed are the only countries where fewer than half say relations are currently positive. This is especially true in Turkey, where about two-thirds said economic ties between their country and the U.S. were bad, even before the U.S. imposed new sanctions on Turkey in October.

Across the Asia-Pacific region, six-in-ten or more in each country say their economic ties to the U.S. are currently good. Around three-quarters or more take this position in India (74%), Australia (85%) and the Philippines (89%).

Canadians also have tempered evaluations, with about two-thirds saying that ties are good and about a third disagreeing.

And, when comparing economic ties to the U.S. and to China, many publics have a sanguine view of their current economic relationship with both superpowers. More than two-thirds in each of the sub-Saharan African countries surveyed describe current economic ties with both China and the U.S. as good, and around half or more say the same in each of the Latin American countries surveyed.

This pattern is reversed in the Middle East and North Africa, where all publics but Israel rate their economic relationships with China more positively. This is especially true in Lebanon, where there is a 40-point difference between the share who say their ties with the U.S. are good and the share who say ties with China are good. Only in Israel do more say ties to the U.S. are good, and even there, eight-in-ten still see their economic ties with China positively. 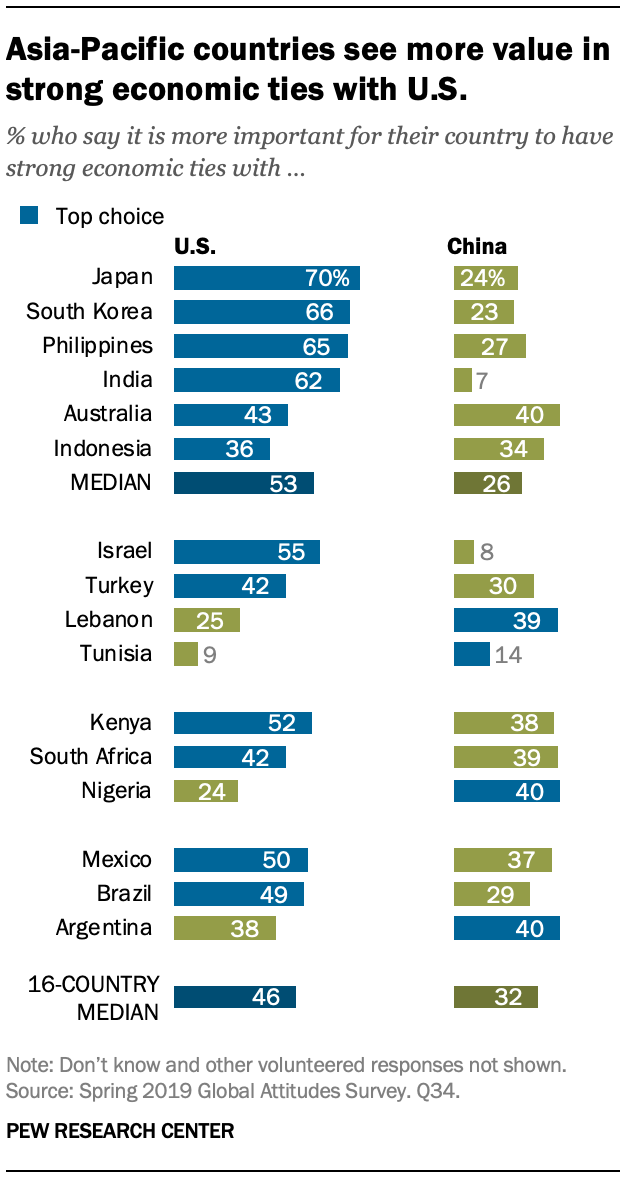 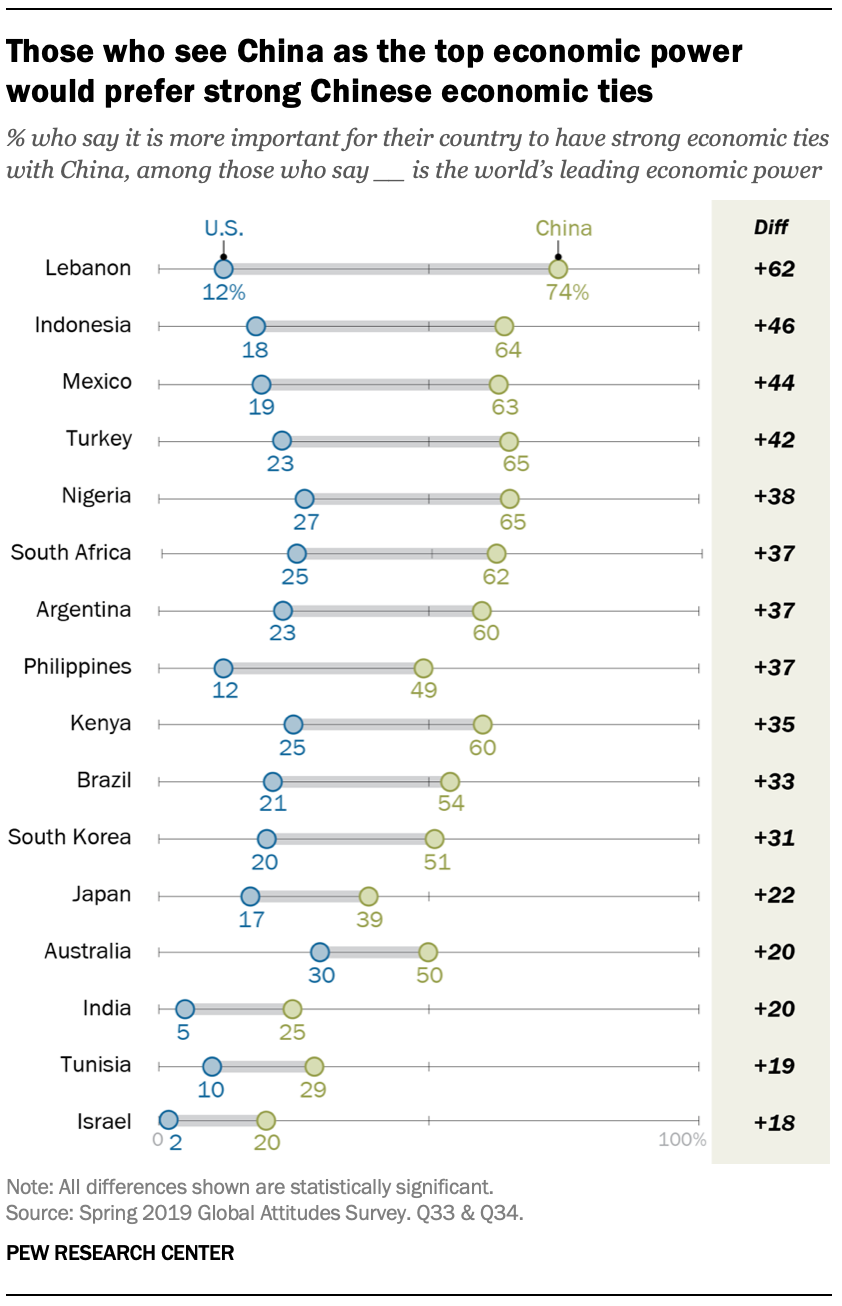 Next: 2. Attitudes toward China
← Prev Page
Page1You are reading page2Page3Page4Page5Page6
Next Page →