To provide comparable data across countries, population estimates for countries of residence and countries and territories of birth for sub-Saharan migrants rely on global migrant stock by their origins and destinations as estimated by the United Nations (UN) for 2015. Estimates for the number of sub-Saharan immigrants living in each destination country differ slightly from totals provided by destination governments featured in this report because of UN estimation procedures.

The year 2015 was the common year for migrant population estimates from the UN as well as surveys in the U.S. and European countries. The United States and top European countries of residence for sub-Saharan immigrants (United Kingdom, France, Italy and Portugal) as estimated by the UN, were selected for analysis. 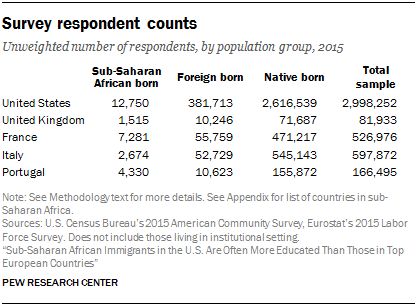 The American Community Survey data were accessed via Integrated Public Use Microdata Series or IPUMS-USA (University of Minnesota). Eurostat’s Labor Force Surveys was provided by Eurostat to use microdata for scientific use. Data in both surveys were anonymized to protect the identity of respondents.

Variables used in each survey

Comparable variables between the U.S. and European countries are reported. The following table lists the variables, universes, variable names and categories.16 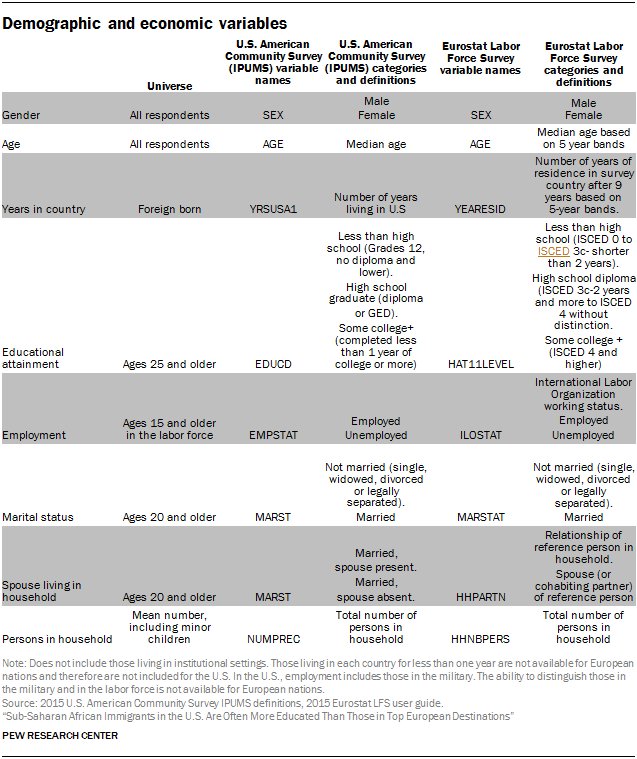 Next: Appendix A: References
← Prev Page
Page1Page2You are reading page3Page4Page5Page6Page7
Next Page →