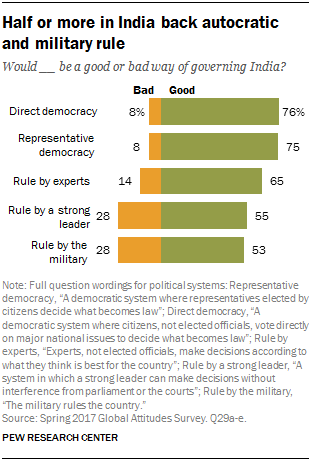 India is the world’s largest democracy by population and democratic modes of governance enjoy widespread support there. But so do other types of nondemocratic governance.

About eight-in-ten (79%) in India are satisfied with the way their democracy is currently working. This includes 33% who are very satisfied. BJP supporters (84%) are significantly more satisfied with Indian democracy than are Congress backers (65%).

Views on the state of Indian democracy mirror public sentiment about the economy. Those who think economic conditions in India are good are much more likely than those who believe conditions are bad to be satisfied with Indian democracy (87% to 53%). Similarly, those who say today’s children will be better off financially than their parents are more likely than those who are pessimistic about prospects for the next generation to be satisfied with democracy (85% to 70%).

Both direct and representative democracy enjoy public support. Three-quarters of Indians say a democratic system where representatives elected by citizens decide what becomes law would be a good way to govern their country. A similar share believes it would be good if citizens, not elected officials, voted directly on major national issues to decide what becomes law. In its 70 years of independence India has never held a national referendum, although there have been state-level plebiscites. (For more on views about democracy around the world, see Globally, Broad Support for Representative and Direct Democracy.)

Roughly two-thirds of Indians say a good way to govern the country would be experts, not elected officials, making decisions according to what they think is best for the nation. India is one of only seven countries among the 38 surveyed where more than six-in-ten support technocracy.

A majority (55%) of Indians also back a governing system in which a strong leader can make decisions without interference from parliament or the courts, while 53% support military rule. Support for autocratic rule is higher in India than in any other nation surveyed. And India is one of only four nations where half or more of the public supports governing by the military.

Next: 3. Indians satisfied with country’s direction but worry about crime, terrorism
← Prev Page
Page1Page2You are reading page3Page4Page5Page6Page7
Next Page →

How people in Asia-Pacific view China