Governance can take many forms: by elected representatives, through direct votes by citizens, by a strong leader, the military or those with particular expertise. Some form of democracy is the public’s preference.

“The effect of [a representative democracy] is … to refine and enlarge the public views, by passing them through the medium of a chosen body of citizens, whose wisdom may best discern the true interest of their country,” wrote James Madison in the Federalist Papers No. 10 in 1787 as Americans debated the nature of their new government. And a democratic system where representatives elected by citizens decide what becomes law is now the mode of governance in one form or another in most of the 38 countries included in the 2017 Pew Research Center survey.

A global median of 78% back government by elected representatives. But the intensity of this support varies significantly between nations. Roughly six-in-ten Ghanaians (62%), 54% of Swedes and 53% of Senegalese and Tanzanians hold the view that representative democracy is very good. Just 8% of Brazilians and 9% of Mexicans agree. The only countries where there is significantly strong opposition to representative democracy are Colombia (24% say it is very bad) and Tunisia (23% very bad).

Attitudes toward representative democracy are also associated with opinions about diversity. In more than a third of the nations surveyed those who think that having people of many different backgrounds – such as different ethnic groups, religions and races – makes their country a worse place to live are less likely than others to support government by elected representatives. In South Africa, a country with a troubled history of racial oppression and conflict, 73% of those who embrace diversity describe representative democracy as a good thing for their country; just 54% agree among those who say diversity makes South Africa a worse place to live.

Many publics want a direct say

Direct democracy, a governing system where citizens, not elected officials, vote directly on major national issues, is supported by roughly two-thirds of the public around the world, with little difference in views between regions.

The strongest support for governing through referenda is found in Turkey (84%), where 53% of the public say it would be very good to have citizens vote on major national issues. Lebanon (83%) and Kenya (80%) also show broad support for direct democracy.

There is also strong backing for such governance in Japan (65%) even though the country has not had a referendum in the post-World War II era.

In Latin America, there is also a generation gap in views of direct democracy. In Brazil, Chile, Mexico and Venezuela, those ages 18 to 29 are more supportive than those ages 50 and older of having citizens, not elected officials, vote directly on issues of major national importance.

In other countries there are sharp divisions along religious or ethnic lines. In Israel it is Arabs (83%) more than Jews (54%) who favor direct democracy, and in Nigeria it is Muslims (70%) more than Christians (55%). 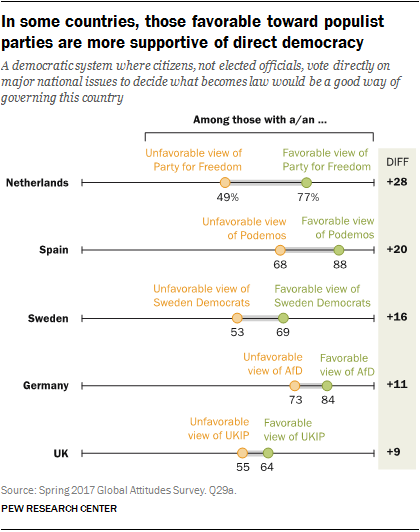 Supporters of some populist parties in Europe are particularly enthusiastic about direct democracy. In Spain, 88% of those who hold a favorable view of Podemos say citizens voting on national issues would be good for the country. In Germany, 84% of AfD backers agree, as do 77% of PVV supporters in the Netherlands.

Support for direct democracy can also be seen in other recent Pew Research Center findings in Europe. In the wake of the United Kingdom’s decision to leave the European Union, a median of just 18% in nine continental EU member states say they want their country to exit the EU. But 53% support holding a national vote on their own country’s EU membership.

And such support is particularly strong among backers of Euroskeptic populist parties, many of whom have promised their supporters a referendum on EU membership. (For more on European’s attitudes about staying in the EU, see Post-Brexit, Europeans More Favorable Toward EU.)

And in six of the nine continental European nations surveyed, strong majorities of those who believe that direct democracy is a very good form of governance support their own EU membership referendum.

Technocracy has its champions

The value of expert opinion has been questioned in the eyes of the public in recent years. But when asked whether a governing system in which experts, not elected officials, make decisions would be a good or bad approach, publics around the world are divided: 49% say that would be a good idea, 46% think it would be a bad thing.

Europeans (a median of 43%) and Americans (40%) are the least supportive. But among Europeans, roughly two-thirds of Hungarians (68%) say leaving decision-making to experts would be a good way to govern.

Asian-Pacific publics generally back rule by experts, particularly people in Vietnam (67%), India (65%) and the Philippines (62%). Only Australians are notably wary: 57% say it would be a bad way to govern, and only 41% support governance by experts.

More than half of Africans surveyed also say governing by experts would be a good thing for their country. Nigerians (65%) are especially supportive. And it is Nigerian Muslims more than Christians who say this.

Young people in a number of advanced economies are particularly attracted to technocracy. In the U.S. the age gap is 10 percentage points – 46% of those ages 18 to 29 but only 36% of those ages 50 and older say it would be good if experts, not elected officials, made decisions. The young-old differential is even greater in Australia (19 points), Japan (18 points), the UK (14 points), Sweden (13 points) and Canada (13 points).

Some support for rule by strong leader

Rule by a strong leader is generally unpopular, though minorities of a substantial size back it. A global median of 26% say a system in which a strong leader can make decisions without interference from parliament or the courts would be a good way of governing. Roughly seven-in-ten (71%) say it would be a bad type of governance.

Opposition is particularly widespread in Europe (a median of 86% oppose rule by a strong leader), with strong opposition in Germany (93%), Sweden (90%) and the Netherlands (89%).

But autocracy is not universally opposed. Roughly four-in-ten Italians (43%) who have a favorable view of Forza Italia, the political party founded by former Italian Prime Minister Silvio Berlusconi, and a similar share of the British (42%) who favor UKIP say a strong leader making decisions would be good for their country. Nearly half of Russians (48%) back governance by a strong leader.

In Asia, 55% of Indians, 52% of Indonesians and 50% of Filipinos favor autocracy. Such support is particularly intense in India, where 27% very strongly back a strong leader. 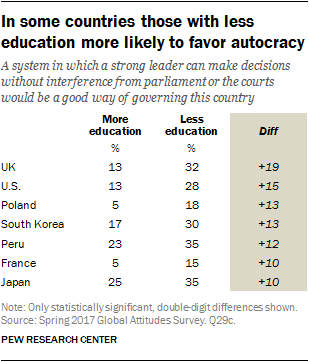 Public views of rule by a strong leader are relevant in countries that have experienced degrees of authoritarianism in recent years. Roughly eight-in-ten Venezuelans (81%) and 71% of Hungarians oppose a strong leader who makes decisions without interference of parliament or the courts. 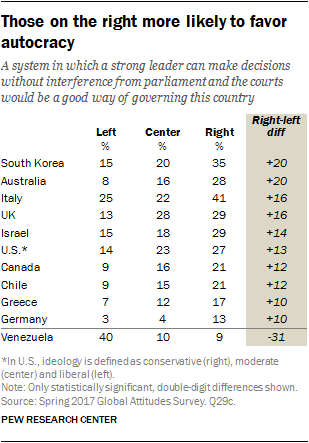 In advanced economies there is little overall backing for autocracy. But, where such support does exist, it is often people with a secondary education or below who are more likely than those with more education to favor autocratic rule. This educational divide is particularly wide in the UK (19 percentage points), the U.S. (15 points), Poland and South Korea (both 13 points).

In a number of nations there is a significant division of opinion about strong leaders based on ideology. Those who place themselves on the right of the ideological spectrum are more likely than those who place themselves on the left to say a strong leader making decisions would be a good way of governing. The ideological gap is 20 percentage points in South Korea and Australia and 16 points in Italy and the UK. Notably, in Venezuela, which has been ruled by populist, left-wing strongmen, those on the left are more supportive of autocratic rule than those on the right.

There is minority support for a governing system in which the military rules the country: a median of 24% in the 38 nations surveyed. At least four-in-ten Africans (46%) and Asians (41%) see value in a government run by the generals and admirals.

The strongest backing is in Vietnam (70%), where the army has long played a pivotal role in governance in close collaboration with the Communist Party, especially in the 1960s and 70s during the war with the United States. Some of this may be nostalgia for the past: By two-to-one (46% to 23%) Vietnamese ages 50 and older are more likely than those ages 18 to 29 to say military rule would be very good for their country.

Notably, roughly half of both Indians (53%) and South Africans (52%), who live in nations that often hold themselves up as democratic exemplars for their regions, say military rule would be a good thing for their countries. But in these societies, older people (those ages 50 and older) are the least supportive of the army running the country, and they are the ones who either personally experienced the struggle to establish democratic rule or are the immediate descendants of those democratic pioneers. In South Africa, blacks (55%) more than whites (38%) also favor the military making governance decisions.

Only one-in-ten Europeans back military rule. But some on the populist right of the political spectrum voice such support. Nearly a third of those who hold a favorable view of the National Front in France (31%) say a governing system in which the military rules the country would be a good thing, as do nearly a quarter of those who favor UKIP in the United Kingdom (23%). 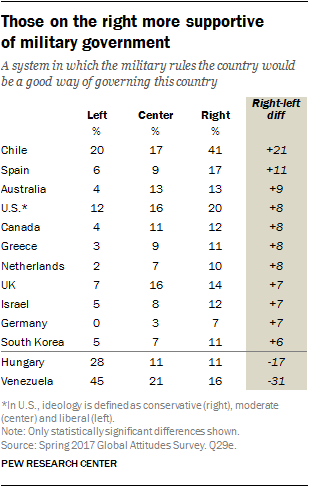 Support for a governing system in which the military rules the country enjoys backing among people with less education in at least half the countries surveyed, with some of the strongest support among those with less than a secondary education in Africa and Latin America.

More than half of Peruvians with less than a high school education (55%) prefer military rule. Only about a third (32%) of more educated Peruvians agree.

Particularly strong backing for military rule also exists among the less educated in Vietnam (76%), Nigeria (57%), Kenya (49%) and the Philippines (47%).

Ideology also plays a role in public views of military rule. But it can cut both ways. In some countries, people on the right of the political spectrum are significantly more supportive of military governance than those on the left, especially in Chile. In Hungary and Venezuela, on the other hand, it is more likely to be individuals on the left who see value in military rule.