In contrast to the strongly nativist rhetoric prevalent in many of the political debates over immigration, publics do not always make a strong link between national identity and a person’s birthplace. A median of 32% across the 14 countries surveyed say it is very important to have been born in my country to be considered truly one of us.

Born in the USA

In 2015, 13.9% of the U.S. population was foreign born. This proportion has increased from 4.7% in 1970. An additional 11.9% of those living in the U.S. are second-generation immigrants. So roughly a quarter of the public are immigrants or the sons and daughters of immigrants.

Against this backdrop, only about a third (32%) of people in the U.S. believe that to be truly American it is very important to have been born in the United States. Nearly a quarter (23%) say it is somewhat important, while a fifth (21%) think it is not important at all.

Nearly half (47%) of people in the U.S. with a high school education or less say that to be American one must be born in the country. Only 14% of the public with a college degree or more shares that opinion.

Roughly half of non-Hispanic blacks (49%), compared with 38% of Hispanics and 28% of whites, believe it is very important to be born in the U.S. to be truly American.

In Europe, relatively few subscribe to idea of birthright nationality 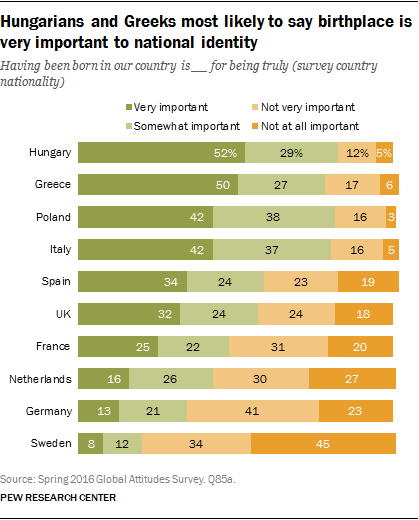 No European country accords legal citizenship based simply on the fact that a person was born on the territory of a state.

The European countries where the public makes the strongest link between national identity and place of birth are Hungary (52% say place of birth is very important), Greece (50%), Poland (42%) and Italy (42%). Notably, in the Netherlands (16%), Germany (13%) and Sweden (8%), fewer than one-in-five believe birthplace is a very important component of national identity.

In some nations, ideology plays a major role in such views. People on the right are much more likely than those on the left to say place of birth is very important in Greece (31 percentage points), the UK (24 points) and Italy (23 points).

Education also affects public views on the relationship between being native born and national identity. In eight of the 10 EU countries polled, people with a secondary education or less are more likely than those with more education to believe it is very important to be native born in order to be considered a true national of that society. This educational differential is 24 percentage points in the UK, 23 points in Spain and 19 points in Poland.

Despite recent public debate about limiting immigration, just 13% of Australians say a person’s place of birth is very important to national identity – perhaps reflecting an acknowledgement that roughly one-in-four Australians (27.7%) were in fact born overseas. Nearly seven-in-ten Australians voice the view that where a person is born is not very important or not important at all. While such sentiment is overwhelming, differences of degree still surface among Australians by age, political affiliation and education. Roughly two-in-ten (19%) of those ages 50 and older place a strong premium on where a person is born, compared with only 4% of those ages 18 to 34. Ideologically, 22% of Australians on the right say place of birth is very important to nationality, but only 6% on the left agree. And with regard to educational level, 18% of those with a high school education or less link birthplace with national identity, while 9% with more than a high school degree share that view.

In Canada, where 20.0% of the population is made up of immigrants, about two-in-ten say it is very important (21%) that a person be born in Canada to be considered truly Canadian. Roughly twice as many older Canadians (28%) as younger ones (13%) say a person must be born in the country to be a true national. People who place themselves on the right (24%) of the political spectrum are slightly more likely than those on the left (16%) to link national identity and place of birth. And Canadians with a secondary education or less (33%) are more likely than those with more than a secondary education (12%) to say that being born in Canada is a very important to being truly Canadian.

For half of Japanese, being native born is very important to being considered Japanese. There is a generation gap in the intensity of such sentiment: 59% of Japanese ages 50 and older accord a strong importance to being born in Japan, compared with 29% of Japanese ages 18 to 34. Education also plays a role in such views: 55% of those with a secondary education or less say birthright nationality is very important, while only 40% of those with more than a secondary education agree.