What does it take to be ‘truly American’? 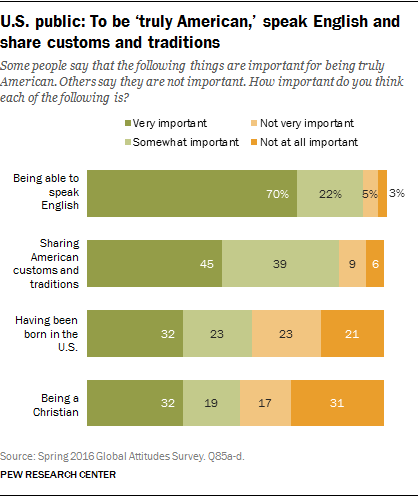 Roughly nine-in-ten in the U.S. (92%) voice the view that to be truly American it is very or somewhat important that a person speak English, with 70% saying it is very important.

More than eight-in-ten think a person’s American-ness depends on whether she or he shares U.S. customs and traditions. In addition, a majority of the public believes that to be truly American a person has to be born in the United States. And the public is divided over whether one has to be Christian in order to be considered American, with roughly a third saying it is very important and another third saying it is not at all important.

In Europe, language, culture are central to national identity 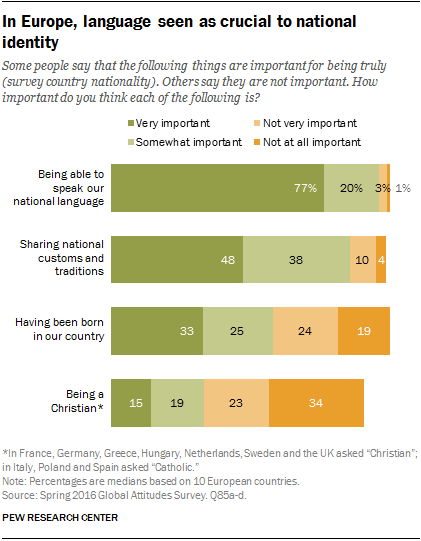 European opinions vary widely about the key components of national identity, but publics agree that language is fundamental. Across the 10 EU countries surveyed, a median of 97% think that being able to speak the national language is very or somewhat important.

There is also a strong cultural component to national identity for Europeans. A median of 86% believe sharing national customs and traditions is at least somewhat important, with 48% saying this is very important. But the intensity of such sentiment differs between countries. While 68% in Hungary and 66% in Greece say national customs and traditions are very important, fewer than four-in-ten in the Netherlands (37%), and roughly three-in-ten or less in Germany (29%) and Sweden (26%) agree.

Fewer Europeans say the land of one’s birth matters to national identity. A median of 58% say it is important for someone to be born in their country to be truly considered a national of that land; a third think this is very important.

Religion is generally seen as even less central to national identity. However, it is an essential factor to many in Greece, where 54% say it is very important to be Christian to be considered truly Greek.

What it means to be Canadian 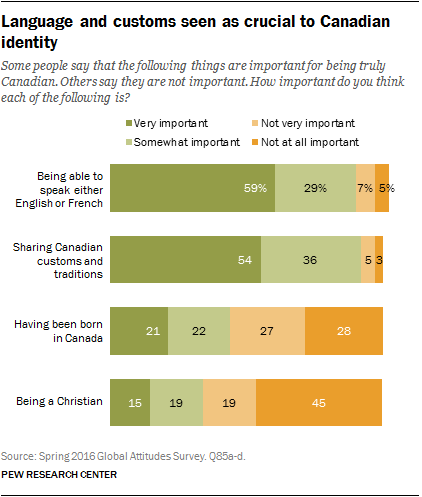 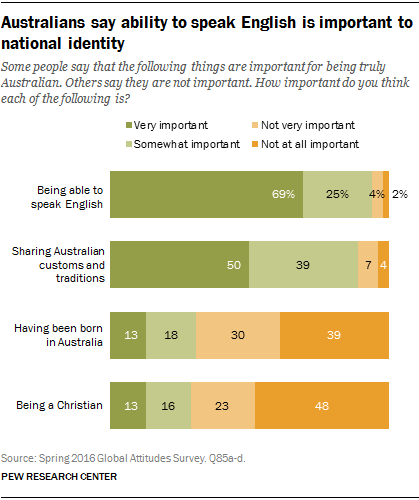 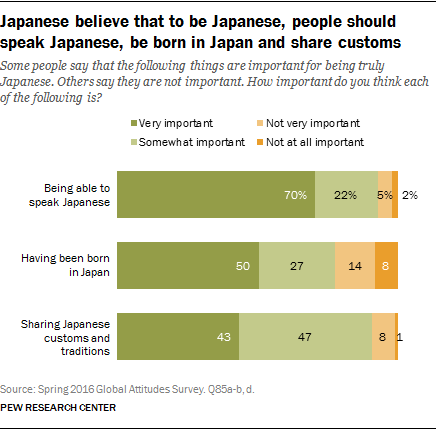 About nine-in-ten Japanese (92%) believe it is very or somewhat important for a person to be able to speak Japanese to be considered truly Japanese. A similar proportion says the same about sharing Japanese customs and traditions. Meanwhile, roughly three-quarters of Japanese (77%) voice the view that it is very or somewhat important to be born in Japan to be truly Japanese. (The question about the link between nationality and religious affiliation was not asked in Japan.)

Next: Acknowledgements
← Prev Page
Page1Page2Page3Page4Page5You are reading page6Page7Page8
Next Page →

In Their Own Words: The Diverse Perspectives of Being Asian in America