In recent years, Pew Research Center surveys in China have consistently found public satisfaction with the country’s economic performance and optimism about the economic future. But they have also highlighted the challenges facing a changing China. In particular, political corruption tops the list of concerns: 49% say corrupt officials are a very big problem, up 5 percentage points from 2015. Another 34% say political corruption is a moderately big problem. 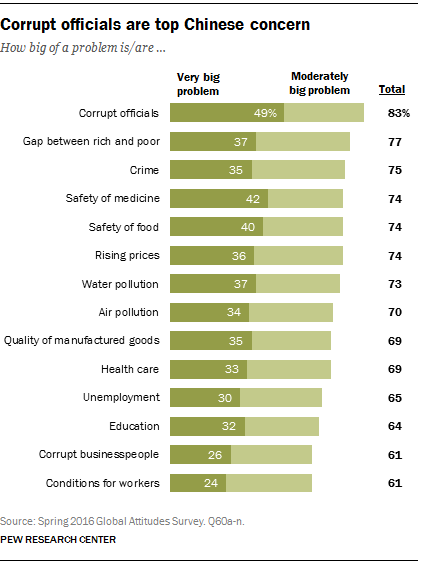 The safety of medicine is also emerging as a major public concern. Forty-two percent believe this is a very big problem, up from 28% last year and only 9% in 2008, when the question was first asked. Four-in-ten also identify food safety as a very big problem.

There is a perception among many that the benefits of China’s extraordinary economic growth over the past couple of decades have not been shared fairly, and 37% name the growing gap between rich and poor as a major challenge.

Another downside associated with China’s growth has been environmental damage. Nearly four-in-ten (37%) consider water pollution a very big problem, and a similar share of the public says this about air pollution. Air quality in many of China’s major cities has been a high-profile issue over the past several years in China and around the world, and it is clear that the Chinese public is willing to make sacrifices to address this challenge. Half believe that their country should reduce air pollution even if it means slower economic growth. Just 24% say air pollution is the price they have to pay for continued economic growth.

At least three-in-ten also rate rising prices, crime, the quality of manufactured goods, health care, education and unemployment as very big problems. There are fewer worries about corrupt businesspeople or conditions for workers.

The highly educated express stronger concerns about air pollution, food safety and the safety of medicines. Those with higher incomes are also concerned about food safety, as well as corrupt officials.

Many expect progress on major challenges 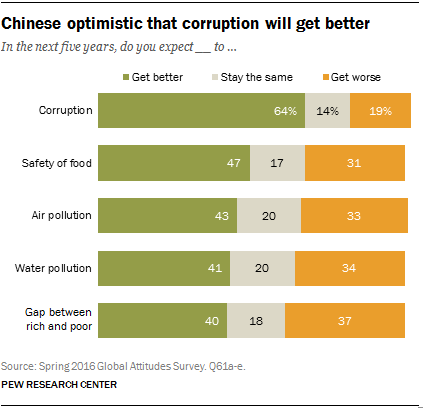 When asked whether a series of problems will get better, get worse or stay the same in the next five years, the Chinese public is optimistic on balance. On corruption – which has been a key priority of Chinese President Xi Jinping’s tenure thus far – most expect progress. A 64% majority believes corruption will lessen over the next five years; only 19% think it will get worse. Nearly half (47%) believe food safety will improve, while a plurality feels this way about air pollution. By a 41%-34% margin, people also tend to think that water pollution will improve. But the public is more divided about inequality: 40% think the gap between rich and poor will get better, while 37% expect it to grow worse. 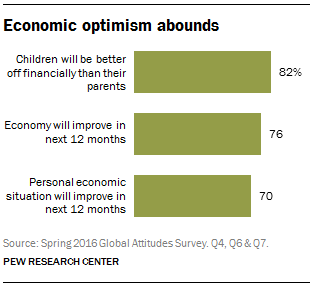 China’s economic growth rate may be slowing, but views about the economy are still widely positive. Nearly nine-in-ten describe the country’s economic situation as very (33%) or somewhat (54%) good. And most see continued progress in the coming year: 22% say the economy will improve a lot over the next 12 months, while 54% think it will improve a little.

The public is also optimistic about the long-term economic future. Roughly eight-in-ten (82%) think that when children in the country today grow up they will be financially better off than their parents. As previous global surveys have illustrated, the Chinese public tends to be more optimistic than others around the world when it comes to the financial prospects for the next generation. In particular, their positive outlook stands in stark contrast to the pessimism found in the United States and much of Europe.

Next: 2. China and the world
← Prev Page
Page1You are reading page2Page3Page4Page5
Next Page →

China’s Economic Growth Mostly Welcomed in Emerging Markets, but Neighbors Wary of Its Influence
China Seen Overtaking U.S. as Global Superpower
The Chinese Celebrate Their Roaring Economy, As They Struggle With Its Costs
Publics of Asian Powers Hold Negative Views of One Another