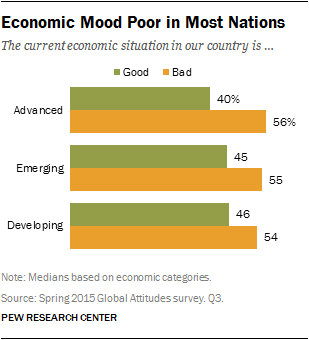 Seven years after the beginning of the global financial crisis, a Pew Research Center survey of 40 nations finds that publics in fewer than half the countries have a positive view of their economy. A median of just 40% in advanced economies say economic conditions are good, as do 45% in emerging economies and 46% in developing nations. Such overall sentiment is largely unchanged from economic sentiment in comparable countries in 2014.

However, the survey also finds that people in emerging economies and developing countries are more likely than publics in advanced economies to believe that economic conditions will improve over the next 12 months. And while only about a quarter of publics in advanced economies think that those in the next generation will be better off financially than their parents, about half or more of respondents in emerging and developing countries see a bright future for the next generation. 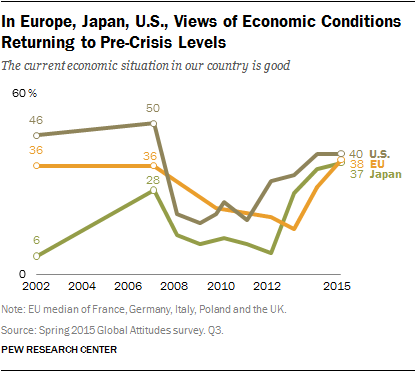 There are also signs of growing public faith in an economic recovery in some of the largest economies. Roughly four-in-ten Americans (40%), Europeans (38%) and Japanese (37%) say economic conditions are good in their countries. Such sentiment is up 30 percentage points in Japan from the low point in 2012; up 23 points from the low in the United States in 2009; and up 23 points from the low in 2013 for the median of five European Union nations. European and Japanese views, while far from positive, have now returned to or exceed pre-financial-crisis levels. But American attitudes, while rebounding, are still more negative than they were in 2007. This modest recovery in public economic sentiment parallels a gradual pickup in economic growth in many of these economies.

And economic attitudes have swung dramatically in a number of nations in just the past year. In Nigeria, views of economic conditions have brightened 18 points. Meanwhile, economic sentiment has darkened in Malaysia (down 26 points), Chile (down 24 points) and Russia (down 20 points).

In the 40 nations surveyed, a median of 45% say economic conditions in their country are good. And just 39% believe that their economy will improve over the next year, a pessimism that echoes projections by the International Monetary Fund that 2015 global growth will be marginally slower than in 2014. Only in developing nations does a majority (58%) expect conditions to get better. 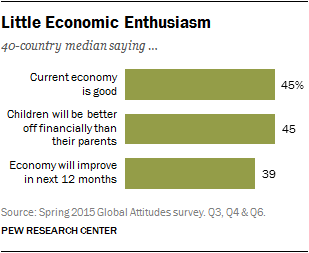 Nor are publics that optimistic about prospects for the next generation. Just 45% around the world express the view that today’s children will be better off financially than their parents. But such doubt is largely centered in advanced economies, where only 27% think kids will be better off. About half or more of those surveyed in emerging markets (51%) and developing nations (54%) expect the next generation to exceed their parents financially.

In many countries, the young – those ages 18 to 29 – are more likely than their elders – those 50 and older – to believe that economic conditions are good. But the greatest generational divide is over prospects for today’s children. In 18 of 40 nations, young people are significantly more likely than older people to believe that when children today grow up they will be better off financially than their parents. 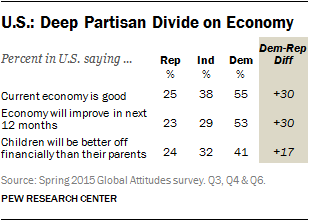 These are among the main findings of a new Pew Research Center survey, conducted in 40 nations among 45,435 respondents from March 25 to May 27, 2015. 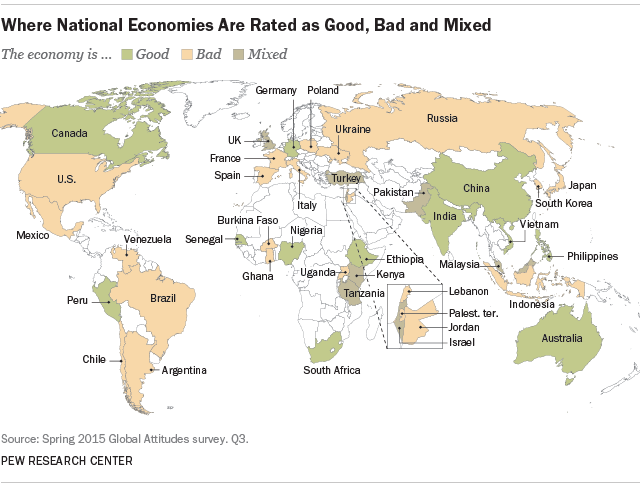 The world economy is growing at a moderate pace, according to the IMF. Much of this growth is being driven by economic activity in advanced economies at a time when expansion in emerging and developing economies is slowing.

Such modest growth has not impressed many global publics, who are fairly gloomy about the current state of their economies. A median of 56% in advanced economies say economic conditions are bad, while 55% in emerging markets and 54% in developing countries share this negative view.

In emerging markets, half or more in 14 of 21 countries see their economy as negative. The gloomiest are Ukrainians (94%), Lebanese (89%) and Brazilians (87%). At the same time, 90% of Chinese, 86% of Vietnamese and 74% of Indians think economic conditions are good. 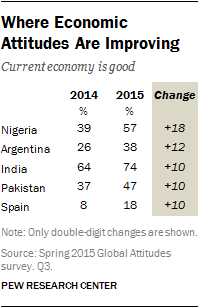 In developing economies, half or more in six of eight nations say their economy is performing poorly. The most downbeat are Ghanaians (73%) and Palestinians (67%). Only Ethiopians (89%) and Senegalese (60%) think economic conditions are good.

There is even greater disparity in economic perceptions between geographic regions. A median of 51% in the Asia-Pacific region say economic conditions are good, as do 48% in Africa. But just 36% in Latin America, 31% in the Middle East and 28% in the European Union believe their economy is doing well.

Publics’ perception of their economy has improved significantly in just a handful of countries over the past year. In 2014, only 39% of Nigerians said their economy was in good shape; now, 57% voice a positive view. In Argentina, the proportion saying economic conditions are good is up 12 percentage points, from 26% to 38%. Views have also improved in Spain, India and Pakistan.

The revival in economic sentiment is more pronounced compared with views in the immediate wake of the financial crisis. In spring 2009, just 17% of Americans thought their economy was doing well. Now, 40% are upbeat. Similarly, in Germany, 28% said in 2009 that economic conditions were good; 75% now say the economic situation is good. And in the United Kingdom, the story is the same: 11% in 2009, now 52%. 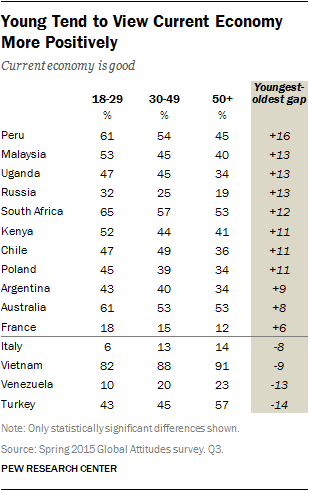 In 11 of the 40 nations surveyed, those ages 18 to 29 are significantly more upbeat about current economic conditions than people ages 50 and older. This generation gap is particularly strong in Peru: 61% of younger Peruvians say the economy is doing well, but only 45% of older ones agree. This age-related difference, with the young notably positive and the old more negative, also exists in countries such as Malaysia, South Africa, Kenya and Australia. Notably, however, in a handful of nations – Italy, Vietnam, Venezuela and Turkey – it is older respondents who are more pleased with economic conditions than are the young, though in both Italy and Venezuela, both age groups are nonetheless quite dissatisfied.

Men and women around the world generally see their economy in the same light. But there is a gender gap in economic perceptions in some key countries: in the U.S., 44% of men but just 36% of women say their economy is good; and in Japan, 46% of men but only 30% of women are positive about economic conditions.

Publics in Emerging, Developing Nations Expect Economy to Pick Up

The predominant view among emerging and developing countries is that their economies will improve over the next 12 months. But a plurality in advanced economies expects economic conditions to remain about the same. Relatively few around the world foresee their economies worsening.

A median of 25% in advanced economies expects an economic uptick. But such sentiment varies widely. The Israelis (47%) and Spanish (42%) are the most optimistic. The French (20%), Australians (21%) and South Koreans (21%) are the least likely to expect conditions to improve.

In advanced economies, a median of 42% expect conditions to remain about the same, with the strongest such sentiment in Germany and Japan (both 54%). It is notable that the IMF expects Germany to grow by only 1.6% in 2015 and Japan to expand by a mere 0.8%.

Publics in emerging markets are far more optimistic: a median of 40% believe economic conditions will improve. Majorities in six of the 21 countries expect their economy to do better.

Those in developing nations have even higher hopes for the future. Half or more in six of eight such countries voice the view that their economy will do better over the next year. People in Burkina Faso (85%) and Ethiopia (84%) have the greatest optimism. Palestinians (30%) are the least upbeat about the future. 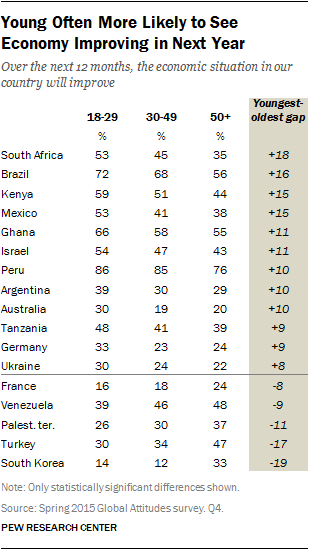 In 12 of the 40 countries surveyed, people ages 18 to 29 are more optimistic about economic conditions in the next year than are people ages 50 and older. This is particularly true in Africa and Latin America. For example, 53% of young South Africans expect economic conditions to improve, but only 35% of older South Africans agree. Similarly, 59% of young Kenyans say the economy will pick up in the next 12 months, while just 44% of older Kenyans share that view. More than half (53%) of young Mexicans are upbeat about the economy’s prospects, but only 38% of their elders are optimistic.

Public expectations of the economic prospects for the next generation are a telling indicator of a society’s optimism or pessimism about the future.

About half or more of the publics in both emerging economies (51%) and developing nations (54%) believe that when today’s children grow up they will be better off financially than their parents. This includes more than half in 11 of 21 emerging markets and five of eight developing countries.

However, there is not always a relationship between recent economic performance and optimism. The most downbeat about the financial future of the next generation among publics in emerging and developing countries are the Poles (53% say today’s kids will be worse off) and the Turks (52%), despite the fact that Poland grew by 3.3% in 2014 and Turkey by 2.9%. Neither has experienced Asian-style growth rates, but nonetheless they are doing fairly well for their regions.

Publics in advanced economies are almost uniformly pessimistic about prospects for the next generation. A median of 64% anticipates that today’s kids will be worse off in the future, including half or more in 10 of 11 nations. Of the 40 countries surveyed, the pessimism found in nine advanced economies exceeds the negativity seen in all 29 emerging and developing economies. Only in Israel (51%) does roughly half the public voice the view that today’s children will be better off financially than their parents.

By far, the French (85%) are the most pessimistic about prospects for the next generation. The French economy grew by only 0.2% in 2014, among the worst performances in Europe. But the French are not alone. The Japanese economy shrank by 0.1% in 2014, and 72% of Japanese expect today’s kids to be worse off in the future.

Regional differences in perception about the financial future for today’s children are quite stark. In Latin America, a median of 58% believe the next generation will be more prosperous than their parents, as do 56% in Africa and 51% in the Asia-Pacific region. But a median of just 32% in the Middle East and 28% in six European Union countries are optimistic.

In a number of nations, those ages 18 to 29 are significantly more likely than those ages 50 and older to expect today’s kids to be better off financially than their parents. Young Spaniards (47%) are far more likely than older ones (21%) to believe that the next generation will be better off. There is a comparable 24-point generation gap in such views in Peru and a 21-point difference in Brazil and Germany. But the opposite generational divide exists in Turkey, where just 34% of young people are optimistic about the financial prospects of the next generation, while 56% of older people think children’s future is bright.