The rise of ISIS has generated strong concerns in nations around the world, and a new Pew Research Center survey finds broad global support for American military efforts against the terrorist group. And unlike the Iraq War a decade ago, the current U.S. air campaign in Iraq and Syria is backed by majorities in America’s European allies and endorsed by publics in key Middle Eastern nations.

However, global publics mostly oppose another element of recent U.S. national security policy: the harsh interrogation methods used against suspected terrorists in the wake of 9/11 that many consider torture. A median of 50% across 40 nations surveyed say they oppose these practices, which were detailed in a widely publicized U.S. Senate report in December 2014. Only 35% believe they were justified. Americans disagree – nearly six-in-ten (58%) say they were justified. 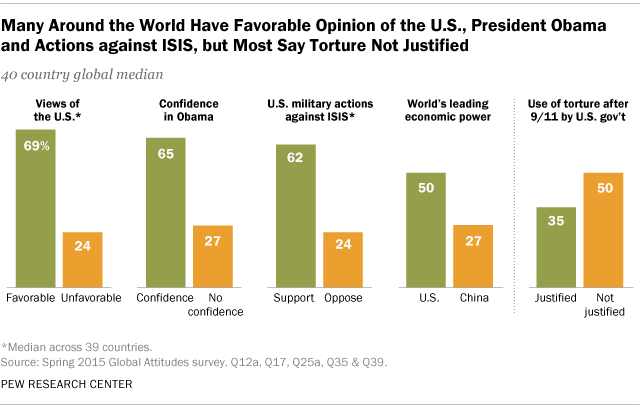 And more broadly, Americans are more supportive of using torture than others around the world. The U.S. is one of only 12 countries where half or more approve of their own government using torture against suspected terrorists.

Overall, ratings for the U.S. remain mostly positive, with a global median of 69% expressing a favorable opinion of the country. President Obama also remains popular in most countries, and his ratings have improved over the last year in 14 nations. The biggest gains are found in India, which the president visited in January. About three-in-four Indians (74%) now express confidence in Obama, compared with 48% a year ago.

By far, the sharpest decline in Obama’s image occurred in Israel. Following a year marked by tensions between Obama and Israeli Prime Minister Benjamin Netanyahu over negotiations with Iran, confidence in Obama slipped from 71% in Israel to 49%. Eight-in-ten Israelis disapprove of how Obama is dealing with Iran’s nuclear program.

Meanwhile, assessments of U.S. economic power are on the rise. After the onset of the Great Recession in 2008, many believed the global economic balance of power was shifting, as China’s economy expanded while the U.S. struggled. But over the last year, as the American economy has continued to rebound, the number of people naming the U.S. as the top economy has increased, especially in Europe. Still, when asked about the future, most publics think China has eclipsed or will eventually eclipse the U.S. as the dominant superpower.

China’s rise has generated anxiety and security concerns among many of its neighbors, and the Asian nations surveyed mostly welcome U.S. plans to commit more military resources to the Asia-Pacific region, which is part of a U.S. strategy sometimes referred to as the “pivot” or “rebalancing” toward Asia. Half or more in Vietnam, the Philippines, Japan, India, Australia and South Korea say a greater American military commitment to the region would be a good thing because it could help maintain peace. Malaysia is the only Asian nation where more than half (54%) takes the opposite view that the pivot is bad because it could lead to conflict with China.

There is also considerable support for the major economic component of the pivot: the Trans-Pacific Partnership, or TPP. This trade agreement, which is currently under negotiation, would deepen economic ties among a number of nations on both sides of the Pacific. Roughly half or more in seven of the nine TPP nations in the study believe the agreement would be a good thing for their country.

However, the American public’s embrace of the pivot is somewhat tepid. By a 49%-29% margin, Americans support TPP, although nearly a quarter offer no opinion. They are more divided over committing additional defense resources to Asia – 47% support the idea, while 43% oppose it. Nonetheless, when asked whether the U.S. should use military force to defend an Asian ally that got into a military conflict with China, 56% of Americans say yes, while 34% say no. Key allies in the region have faith that Washington would come to their defense. Fully 73% of South Koreans, 66% of Filipinos and 60% of Japanese say the U.S. would use force if their country were involved in a military conflict with China.

In the U.S., there are substantial partisan divides over American engagement in Asia. Republicans are less supportive than Democrats or independents of a potential trade deal, but more supportive of American military commitments in the region.

Even though Asian publics largely welcome American economic and security initiatives, they also value their economic relationships with China. In fact, in Australia and South Korea, two close American allies, the balance of opinion is that having strong economic ties with China is more important than having such ties with U.S.

In China itself, America’s intentions are viewed with suspicion. More than half (54%) believe the U.S. is trying to prevent China from becoming equally as powerful; just 28% say the U.S. accepts that China will eventually be an equal power.

These are among the main findings of a new Pew Research Center survey, conducted in 40 nations among 45,435 respondents from March 25 to May 27, 2015. (See here for a map of countries included in the survey).

The survey finds that overall ratings for China are mostly positive. A global median of 55% express a favorable view of China, while 34% have a negative opinion. Ratings tend to be especially positive in sub-Saharan Africa (a median of 70% favorable), although they are still slightly lower than the ratings received by the U.S. in the region. The U.S. also receives higher marks than China in Asia, Latin America and especially Europe. The opposite is true, however, in the Middle East. 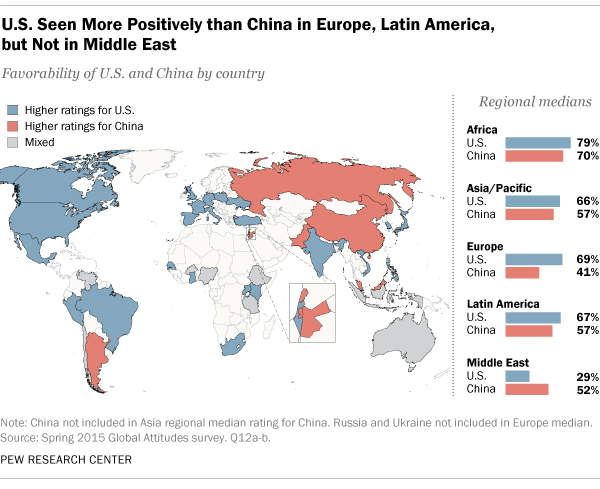 One thing China and the U.S. have in common is that both nations tend to get better ratings among young people. In 18 nations, people under age 30 are more likely than those 50 and older to express a positive opinion of China. And this is especially true in the U.S., where 55% of 18-29 year-olds offer a favorable view, compared with 27% of people 50 and over. Meanwhile, 59% of Chinese under age 30 see the U.S. favorably, compared with only 29% of those ages 50+.

However, global images of the U.S. and China are very different when it comes to individual rights. A global median of just 34% believe the Chinese government respects the personal freedoms of its people. Large majorities (about three-quarters or more) in the U.S., Canada, Japan, Australia, South Korea and throughout the EU say China does not respect these rights. There are exceptions however: In ten countries, at least six-in-ten say China does respect individual liberty, including the Asian nations of Pakistan, Indonesia and Malaysia.

In contrast to China, the U.S. gets relatively high marks on individual liberty – a global median of 63% say the American government does respect the personal freedoms of its citizens.

Europeans More Critical of U.S. on Personal Freedoms, but Positive about Its Economic Power 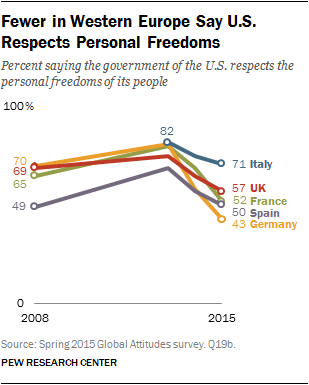 Europeans, however, stand out as increasingly critical of the U.S. government when it comes to protecting the freedoms of its people.

Across the Western European nations polled, ratings for the U.S. on this issue declined between 2013 and 2014, at least partly in response to Edward Snowden’s revelations about the NSA’s electronic surveillance programs. This year’s survey highlights further declines, perhaps in response to highly publicized stories over the last year, such as those concerning harsh interrogation techniques in the post-9/11 era, as well as the controversy in the U.S. regarding police treatment of African-Americans and other minorities. 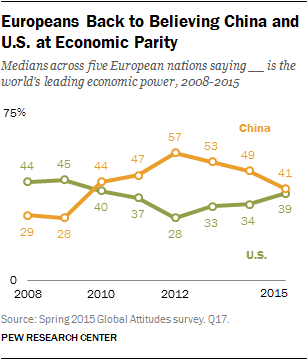 In Germany, France and the United Kingdom, fewer people believe the U.S. government respects personal freedoms than was the case in 2008, the final year of the George W. Bush administration, which was widely unpopular in Western Europe.

At the same time that Europeans give the U.S. poorer ratings for this element of soft power, they believe American economic power is on the rise. Between 2009 and 2012, Europeans increasingly saw China, rather than the U.S., as the world’s economic leader. However, the pendulum has swung back in the other direction since 2012, and today Europeans are now essentially divided on this question. A median of 41% across five EU nations – Britain, France, Germany, Poland, Spain – name China as the top economy, while a median of 39% say it is America.

American Public an Outlier on Torture

Views about America’s post-9/11 interrogations are strongly correlated with how people feel about the potential use of torture in their own countries. Across the nations surveyed, a median of 40% believe their own governments would be justified in using torture against people suspected of terrorism in order to gain information about possible attacks. A median of 45% oppose this idea. 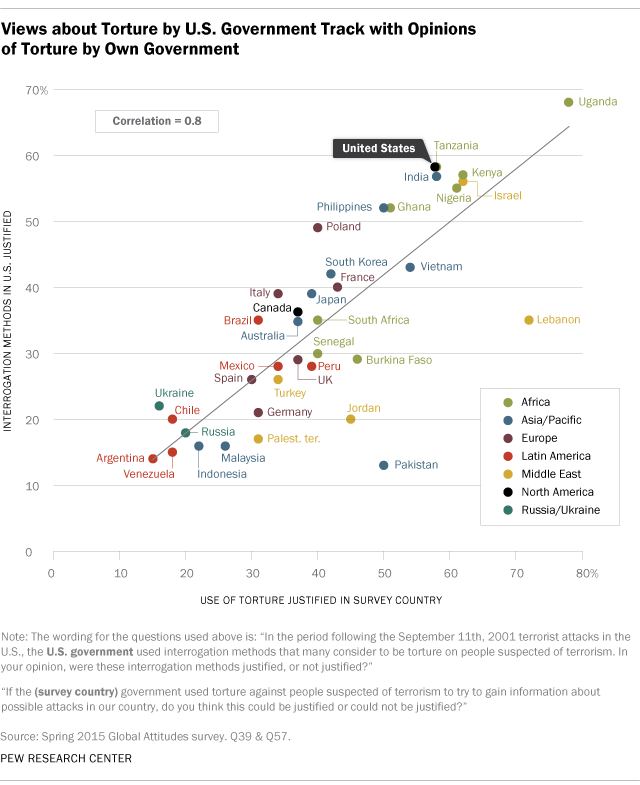 Compared with other nations, Americans are generally more supportive of using torture in this type of situation. Nearly six-in-ten (58%) in the U.S. say it could be justified, making it one of only 12 countries surveyed where at least half hold this view.

Next: 1. America’s Global Image
← Prev Page
You are reading page1Page2Page3Page4Page5
Next Page →

Global Publics Back U.S. on Fighting ISIS, but Are Critical of Post-9/11 Torture
China’s Global ImageEuropeans More Critical of U.S. on Personal Freedoms, but Positive about Its Economic PowerAmerican Public an Outlier on Torture
1. America’s Global Image 2. Views of China and the Global Balance of Power 3. Asia in Focus Methodology