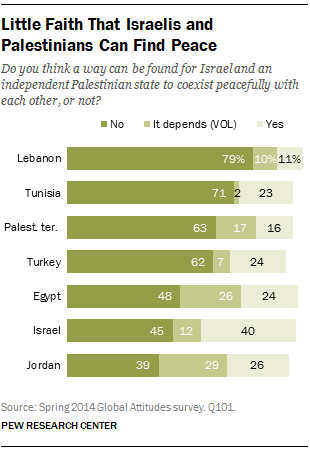 In the wake of yet another breakdown in the Middle East peace process, publics in the region have little faith that a way can be found for Israel and an independent Palestinian state to coexist peacefully with each other. Majorities or pluralities in countries across the region voice the view that peaceful coexistence is not possible. And such pessimism is on the rise among many Middle Eastern publics.

These are the findings of a new survey by the Pew Research Center of 7,001 people in seven nations conducted April 10 to May 16, 2014.

Cynicism about peaceful Israeli-Palestinian co-existence is particularly strong in Lebanon, where 79% of the public say such an outcome is not possible. This includes 93% of Shia Muslims, 72% of Christians and 69% of Sunni Muslims. Just 11% of Lebanese hold the view that the Israelis and Palestinians can live together in harmony.

But grave doubts about an Israeli-Palestinian modus vivendi are also expressed by a significant majority of Tunisians (71%), the Palestinians themselves (63%) and Turks (62%). Among Palestinians, 68% of those living in Gaza and 60% living on the West Bank say peaceful accommodation is impossible. Only 16% of Palestinians in the Palestinian territories see Israel and a Palestinian state coexisting peacefully.

Pluralities of Egyptians (48%) and Jordanians (39%) also say that the Israelis and Palestinians cannot learn to live together, while roughly a quarter of both publics think they can. About three-in-ten Jordanians and a quarter of Egyptians also volunteer that prospects for peaceful coexistence depend on circumstances. In Jordan, roughly four-in-ten (42%) Palestinians living there do not believe Israel and a Palestinian state can exist in harmony, while about a third (34%) of ethnic Jordanians are similarly pessimistic. 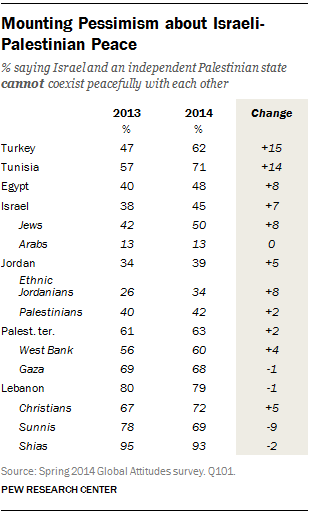 Israelis, overall, are less negative than their neighbors in the region about prospects for accommodation between Israelis and Palestinians, but even they are divided about such a possibility. Forty-five percent of Israelis say their country cannot coexist peacefully with a Palestinian nation, while 40% express the view that such mutual accommodation is possible.

But views of the future are sharply divided along ethnic and religious lines within Israel. Israeli Arabs (13%) are far less pessimistic about a two-state solution than are Jews (50%). In fact, 64% of Israeli Arabs say coexistence is possible. Only 37% of Jews in Israel agree. And, among Jews, there are deep divisions along religious lines on this issue. Three-quarters (76%) of self-described Orthodox Jews say Israel and an independent Palestinian state cannot coexist.1 Roughly half (53%) of self-identified Traditional Jews agree. But Secular Jews are more optimistic, with only 38% expressing the view that a two-state solution to the Israeli-Palestinian problem is impossible. Nearly half (48%) of these Seculars say the two nations can live in harmony.

Attitudes about prospects for a two-state solution are in flux. In a number of countries in the region there is mounting doubt about the possibility of peaceful coexistence between Israel and a Palestinian state. Such pessimism is up 15 percentage points in Turkey, 14 points in Tunisia and eight points in Egypt since 2013. Moreover, wariness about a two-state solution has grown among two pivotal publics: Jews in Israel and ethnic Jordanians. In both groups, pessimism is up eight points.