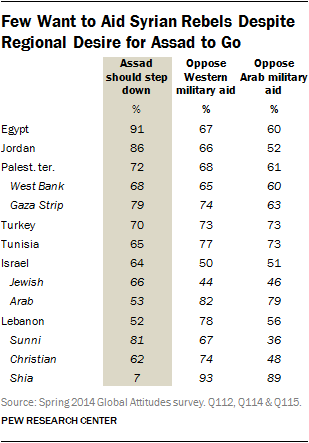 After three years of civil war, Syria’s neighbors fear that al Qaeda or other extremist groups could take control of that war-torn land, according to a new survey by the Pew Research Center. Regional publics widely disapprove of Syrian President Bashar al-Assad and they want him to step down. Nevertheless, there is mounting opposition in the Middle East to the West or Arab nations supplying arms and military supplies to anti-government groups in Syria.

Strong majorities in most of Syria’s neighboring countries, especially in Lebanon and Israel, fear an extremist takeover in Damascus.1 The least concern is in Turkey, despite a number of terrorist incidents on the Turkish-Syrian border.

Half or more of the publics in the nations surveyed also voice unfavorable views of Assad and want him out of office, including strong majorities in Egypt and Jordan.

Yet half or more of the same publics also oppose outsiders getting involved in the conflict, with the greatest resistance being toward Western aid. Notably, Jordanians, who in 2013 backed foreign arms for the rebels, are now against both Western and Arab assistance to the insurgents.

These are some of the findings of a Pew Research Center survey of 7,001 people in seven Middle Eastern nations conducted April 10 to May 16, 2014. 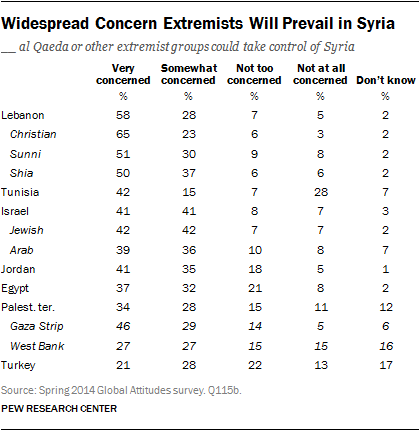 In Lebanon, Christians are the most worried about extremism next door. Roughly two-thirds of Lebanese Christians (65%) but only about half of Sunnis (51%) and Shias (50%) are very concerned about al Qaeda or similar groups gaining control in Syria.

The Lebanese are more concerned about the potential for sectarian strife closer to home. Nine-in-ten Christians (93%) and Shias (90%) and more than eight-in-ten Sunnis (85%) voice concern that tensions between Sunnis and Shias in Lebanon are a very big problem in their country.

In Israel, as might be expected, Jews are somewhat more worried about extremists in Syria than are Arabs (84% to 75%). Nevertheless, the three-in-four Israeli Arabs who voice concern about an al Qaeda-type takeover in Syria point to a greater unease than that expressed by Turks, Palestinians or Egyptians. 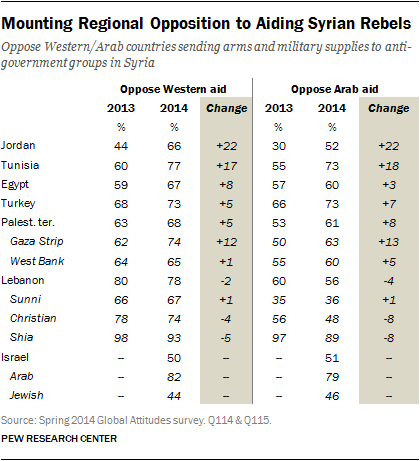 In last year’s survey, there was little public support for aid to anti-government forces battling the Damascus regime, and there is even less backing in 2014.

More than seven-in-ten Lebanese (78%), Tunisians (77%) and Turks (73%) are against Western nations sending arms and military supplies to the insurgents. And about two-thirds of Palestinians (68%), Egyptians (67%) and Jordanians (66%) agree.

Even half of Israelis do not want the West to get involved. But these national survey findings mask ethnic and generational divides within Israeli society. Roughly eight-in-ten Israeli Arabs oppose aid to the rebels, but only 44% of Israeli Jews are against Western help. And in terms of the generation gap, more than half (53%) of Israelis 50 years of age and older oppose Western assistance to anti-government groups in Syria, compared with 43% of Israelis age 18 to 29.

There is only slightly less regional opposition to Arab nations aiding the anti-government forces. Nearly three-quarters of the public in Turkey (73%) and in Tunisia (73%) disagree with such help, as do roughly six-in-ten in the Palestinian territories (61%) and Egypt (60%). About half or more in Lebanon (56%), Jordan (52%) and Israel (51%) also are against such aid.

Opposition to supplying the Syrian insurgents with arms and supplies is on the rise throughout the region. Jordanian opposition to both the West and other Arab states providing military assistance is up 22 percentage points since 2013. Tunisian disapproval of Arab aid is up 18 points and of Western aid is up 17 points.

Assisting the Syrian opposition is a particularly divisive issue in Lebanon, splitting the public along sectarian lines. Fully 89% of Lebanese Shias are against other Arab nations sending arms and military supplies to the rebels (many of whom are Sunni). Over half of Lebanese Sunnis (55%) back aid to the insurgents. Christians are divided on such assistance. 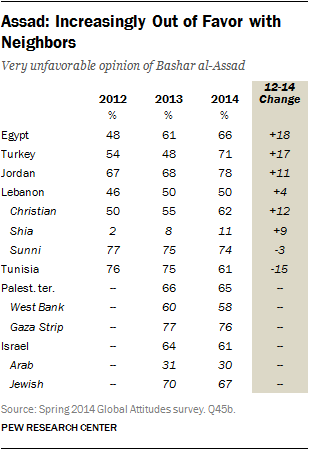 Syrian President Bashar al-Assad has little support in the region. Strong majorities in all neighboring countries have an unfavorable opinion of him. In most countries such sentiment is fairly intense and growing. Fully 78% of Jordanians say they have a very unfavorable attitude toward Assad, a rise of 11 percentage points since 2012. Similarly, 71% of Turks hold a very unfavorable view of the Syrian president, an increase of 17 percentage points in negative sentiment since 2012. And nearly two-thirds of Egyptians (66%) see Assad in a very negative light, up 18 points in the last three years. Only in Tunisia has public sentiment toward Assad mellowed a bit.

Strong majorities in most of Syria’s neighboring countries would also prefer Assad to step down, including roughly nine-in-ten Egyptians and more than eight-in-ten Jordanians. About seven-in-ten Palestinians (72%) and Turks (70%) also want Assad to leave. Nearly two-thirds (65%) of Tunisians would like to see Assad go, but that is down from 88% who held that view in 2012. Notably, more than half of Israeli Arabs (53%) voice a desire for Assad to step down. 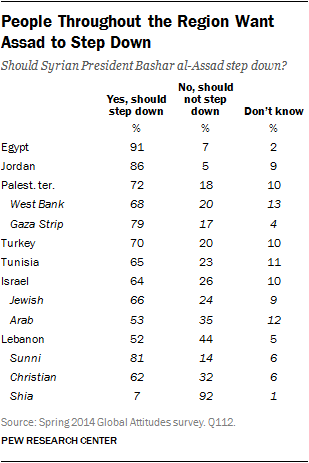 Only in Lebanon, where Syrian refugees now make up almost a quarter of Lebanon’s population, is the public divided over Assad. While half have a very unfavorable view of the Syrian leader, three-in-ten hold a very favorable opinion. These overall numbers reflect a deep sectarian division of opinion within Lebanese society about the Syrian leader. Almost three-quarters (74%) of the Sunni population voice a very negative view of Assad, as do 62% of the Christian community. But 76% of Shias have a very favorable opinion of the Syrian leader, who is a member of the Alawite sect of Shia Islam. Similarly, 81% of Lebanese Sunnis want Assad to step down, while 92% of Shias would prefer for him to stay.

Syria’s Neighbors Want Assad to Step Down, But No Appetite for Aid to Rebels
Fear of ExtremismOpposition to Aiding Syrian RebelsAssad Widely Opposed
Methods in Detail

In countries near Syria, widespread fear about the spread of violence, extremists