Immigration has been a contentious issue in Europe over the past several years, and in the seven EU nations polled many would like to see fewer immigrants allowed into their countries. This is especially true in Greece and Italy, where views about immigrants and their impact on society tend to be particularly negative.

Concerns about immigration include both cultural and economic issues. Many believe that immigrants do not want to adopt their new country’s customs and ways of life, and many think immigrants are taking jobs away from native-born citizens.

Consistently, college graduates express more positive attitudes toward immigration than those with less education. Meanwhile, negative views about immigration are more common on the political right than on the left. 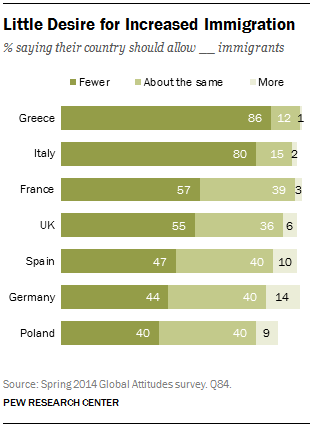 Huge majorities in both Greece (86%) and Italy (80%) say they want fewer immigrants allowed into their countries. More than half in the United Kingdom and France hold this view, as do 47% in Spain. In Germany and Poland, the public is closely divided between those who want less immigration and those who say immigration levels should remain about the same as they are now.

Very few people in these EU nations want increased immigration. The percentage saying they believe more immigrants should be allowed into their country ranges from 14% in Germany to only 1% in Greece. 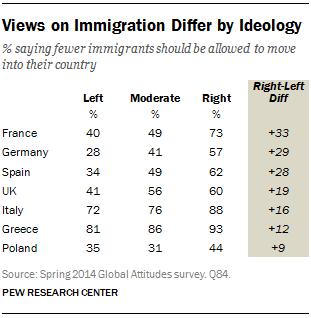 The desire for less immigration is particularly strong among people on the right side of the ideological spectrum. For example, in France 73% of those on the political right want fewer immigrants allowed into the country, compared with 40% among those on the left of the political spectrum. Double-digit right-left gaps also exist in Germany, Spain, the UK, Italy and Greece. 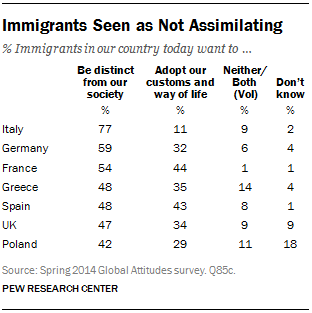 When asked whether they believe immigrants want to adopt national customs and ways of life or remain distinct from the broader society, many in these EU countries, including more than half the public in Italy, Germany and France, express frustration over immigrants’ perceived failure to assimilate. And at least four-in-ten express this view in Greece, Spain, the UK and Poland.

In Germany, the UK, Greece and Spain, respondents who have not graduated from college are more likely than those who have to believe that immigrants want to be distinct from society. In France, the UK and Italy, this view is especially prevalent on the ideological right.

The Economic Role of Immigrants 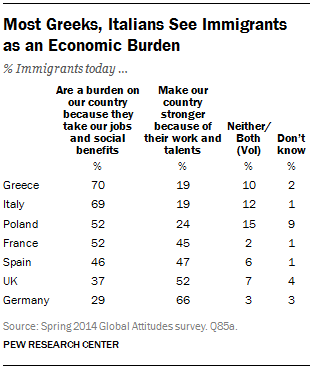 Public opinion regarding the economic impact of immigration varies considerably across the nations polled. Roughly seven-in-ten Greeks and Italians say immigrants are a burden on the country because they take jobs and consume social benefits. On balance, Poles and the French also lean more toward this position.

In contrast, the British and even more so Germans tilt toward saying immigrants make their country stronger because of their work and talents. Opinion is closely divided on this question in Spain.

People without a college degree are more likely than college graduates in all seven nations to see immigrants as an economic burden. For instance, only 18% of British college graduates hold this view, compared with 51% of those with less education. 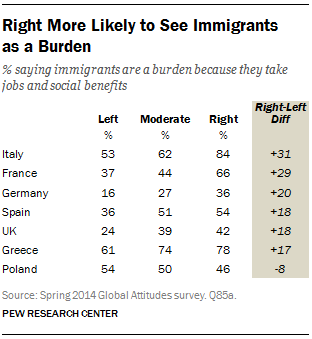 Attitudes on this issue are also related to ideology. People who identify themselves as being on the political right are consistently more likely to characterize immigrants as a burden on the country’s economy. The gap between left and right is especially wide in Italy (31 percentage points), although double-digit gaps are also found in France, Germany, Spain, the UK and Greece. 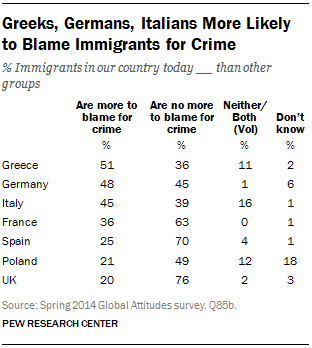 Again, right-of-center respondents express more negative opinions about immigrants on this question. For example, 54% of Italians on the political right place more blame for crime on immigrants than other groups, compared with 35% among those on the left.