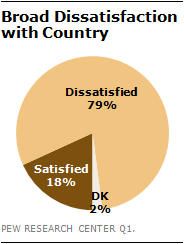 Salvadorans are extremely dissatisfied with current conditions in their country, and nearly everyone is concerned about gang-related violence and crime. When it comes to solving the urban gang problem that has plagued El Salvador, the public is deeply divided along partisan lines over whether the government is making any progress, but unanimously supports enlisting the army to join the fight.

Salvadorans have a very positive image of the U.S. and most believe that their fellow countrymen have a better life there. A majority of Salvadorans say they would move to the U.S. if they had the opportunity, including nearly three-in-ten who would be willing to do so without authorization. Men and younger people are more intent on leaving El Salvador for their northern neighbor. 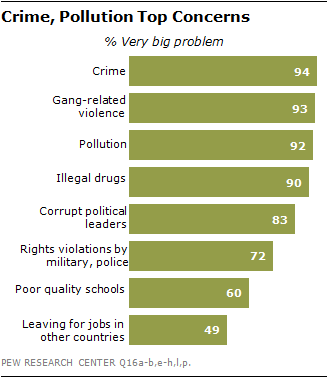 Few Salvadorans are satisfied with the direction of their country. Just 18% say things are going well in their nation, while nearly eight-in-ten (79%) say they are dissatisfied with current conditions.

Broad majorities say political corruption and human rights violations by the military and police are major issues as well. And six-in-ten are very concerned about the lack of high quality education in the country.

Lower down the list of concerns is the fact that many people leave the nation for jobs in other countries. About half of Salvadorans (49%) say this is a very big problem.

While corruption is rated as a top concern, relatively few Salvadorans claim to have experienced it firsthand. Only 15% say they have ever had to do a favor for or pay a bribe to a government official to receive services in the past year, including just 3% who say they have had to do so very often.

Many Salvadorans are personally worried about crime. Roughly half (51%) are afraid to walk alone at night within a kilometer of their home. Urban respondents are particularly likely to express fear for their safety (59% vs. 35% among rural respondents). Nonetheless, few claim to have a personal relationship with urban gangs – just 7% say they have a family member or friend in a gang and less than 1% say they are in a gang themselves. 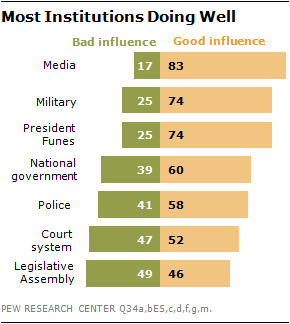 Despite widespread concerns about crime and political corruption, President Mauricio Funes and the national government receive positive reviews from the Salvadoran public. At least 60% say each has a good influence on the way things are going in the country. The media and military also receive very high ratings, and 58% say the police have a positive impact.

Salvadorans are less enthusiastic about their court system, which was embroiled in a constitutional conflict with Funes’ administration in 2012. Roughly half (52%) say the courts have a good influence on the way things are going in their country but 47% say their influence is bad. The Legislative Assembly fares even worse. Less than half (46%) give the Assembly positive reviews, and 49% say their assembly members are doing poorly. 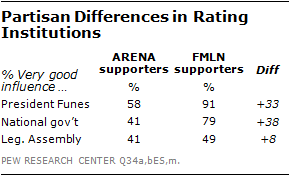 People who identify with President Funes’ party – the Farabundo Martí National Liberation Front (FMLN) – give Funes and the national government much higher ratings than those who support the opposition party, the Nationalist Republican Alliance (ARENA). Among FMLN supporters, 91% say Funes has a good influence on the country and 79% say the same about the national government. Even among ARENA identifiers, however, a majority (58%) think Funes is having a good influence. About four-in-ten ARENA supporters (41%) say this about the national government. Supporters of both parties are split over the performance of the Legislative Assembly, control of which is nearly equally divided between the two parties. 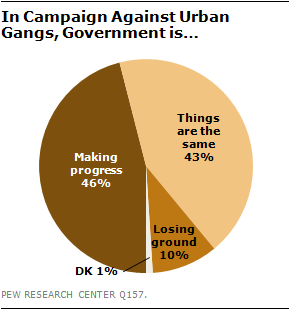 Addressing the issue of gang-related crime is clearly a priority for Salvadorans. More than eight-in-ten (83%) say it is more important for the government to maintain law and order in El Salvador than to protect personal freedoms (10%). Less than one-in-ten (7%) volunteer both are a priority.

Salvadorans are split, however, on whether the government is gaining the upper hand in the fight against urban gangs. More than four-in-ten (46%) say the government is making progress in its campaign, while a nearly equal percentage (43%) says things are the same as they have been in the past. Still, just 10% believe the government is actually losing ground in the conflict.

Nonetheless, there is nearly unanimous support for using the Salvadoran army to fight the gangs (94%). Only 5% oppose such an approach. 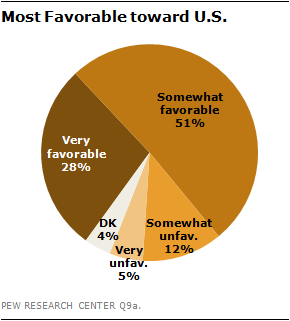 A broad majority of Salvadorans (79%) hold a positive view of the U.S. Just 17% have an unfavorable one. This positive opinion is widespread across all demographic groups.

While few Salvadorans have ever traveled to the U.S. (11%), most say they have friends or relatives who live there (67%).3 Roughly a third of Salvadorans (31%) report receiving money from relatives living abroad.

Salvadorans’ personal experience with migration to the U.S. and its impact on their relatives and friends is mixed. On the one hand, substantial percentages know someone who has been deported or detained by the U.S. government (47%) or who has returned to El Salvador because they could not find work in the U.S. (35%). 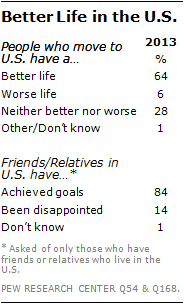 On the other hand, most Salvadorans believe that those who move to the U.S. have a better life (64%). Just 6% say their countrymen have a harder time in the U.S., while 28% say it is neither better nor worse. A broad majority (84%) of those who know someone living in the U.S. also say their friends and family have achieved their goals.

Most (84%) say it is good for El Salvador that so many of their fellow Salvadorans live in the U.S. Just 16% think this is bad for their country.

In addition, a majority of Salvadorans (58%) say they would move to the U.S. if they had the means and opportunity to do so, including 28% who would be willing to move without authorization. Four-in-ten do not want to leave El Salvador. Men and younger people are more likely to want to move to the U.S., and to say they would do so without authorization.