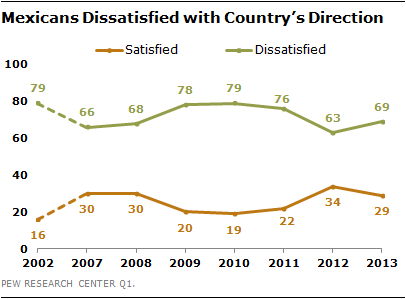 Crime tops the list of public concerns in Mexico, with 81% saying it is a very big problem, up eight percentage points from last year. 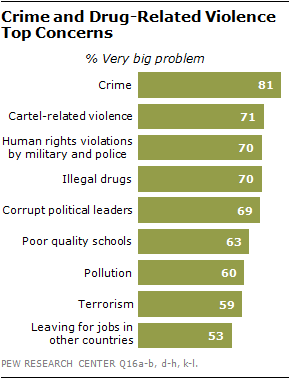 The state of education in Mexico, a major issue throughout President Enrique Peña Nieto’s first months in office, also worries the public. More than six-in-ten Mexicans name poor quality schools (63%) as a very big problem. This is up 14 percentage points from last year and shows the highest level of concern since the question was first asked in summer 2002. More than half of all Mexicans also name pollution (60%), terrorism (59%), and people leaving Mexico for jobs (53%) as very big problems.

The Mexican public’s concern for crime translates to real fear. A majority of Mexicans (63%) say they are afraid to walk alone at night within a kilometer of their home. This marks a seven percentage point increase compared with last year and a 13 point increase since 2007. Both women (65%) and men (60%) express similar levels of unease regarding their safety. Mexicans in urban areas (70%), however, are much more likely to express concern about their safety than those in rural areas (43%). 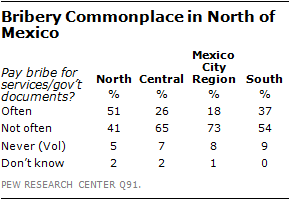 Many Mexicans are affected directly by corruption in the form of bribery. Nearly a third of all Mexicans (32%) say they have had to do a favor, give a gift or pay a bribe to a government official in exchange for services or official documents in the past year.

Bribery is most commonplace in the north of Mexico. About half of Mexicans in the North (51%) say they often have had to pay a bribe for government services or documents. This affects less people in the South (37%) and Central (26%) regions of Mexico. Those who live in the Mexico City area cite the lowest instances of corruption, with only 18% saying they have had to pay a bribe in the past year.

Law and Order a Priority 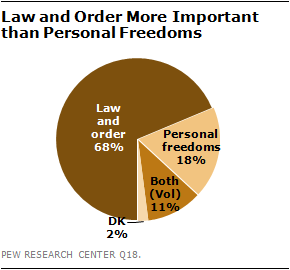 A majority of Mexicans (56%) blame both the U.S. and Mexico for the drug violence. Fewer blame the U.S. (20%) or Mexico (17%) exclusively. When asked about solutions to the drug problem, Mexicans’ opinion are largely unified. A full 85% of the Mexican public favors using the army to fight drug traffickers. A broad majority also supports the U.S. training police and military personnel (74%), and over half (55%) support the U.S. giving weapons and funding. However, fewer Mexicans (34%) want U.S. troops to be deployed in Mexico.

Government and Military Lauded, Not So Courts and Police 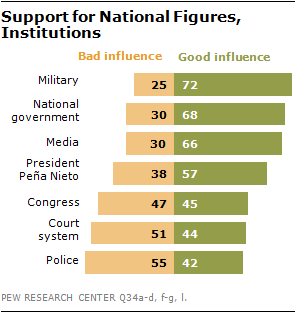 The Mexican government and military also receive high marks from a majority of Mexicans. A full 68% of the Mexican public says the national government has a good influence on the country. There is also broad support for the military among the Mexican public, with about seven-in-ten viewing its influence as good. This support remains virtually unchanged since last year.

The media is also viewed positively: 66% of Mexicans say television, radio, newspapers and magazines have a good influence on the country, an increase of six percentage points from last year.

Other national institutions, however, receive lower marks. Less than half (45%) says that the Congress is a good influence on the country. The court system and the police also receive less positive ratings. A minority of those surveyed view the courts (44%) and the police (42%) as good for Mexico. Opinions of the court system and police remain virtually unchanged from last year. 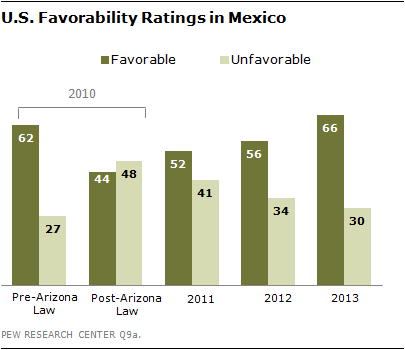 Roughly two-thirds of Mexicans (66%) view the U.S. favorably, the highest percentage since the passage of Arizona’s restrictive immigration law in 2010. Three-in-ten have an unfavorable view of the U.S. Seven-in-ten also view economic ties with the U.S. as a good thing.

Personal connections between the U.S. and Mexico continue to thrive. Although few Mexicans (17%) say they have ever traveled to the U.S., many are in frequent contact with people who live there.1 Of those who have a friend or relative living in another country whom they contact regularly, a full 85% cite the U.S. as a country where their friends or relatives reside. Furthermore, 21% of Mexicans say they receive money from relatives living in another country. Of those who live in the North region of Mexico, this figure nearly doubles to 39%.

The Mexican public’s view of the immigrant experience is generally positive. Of those who know someone living in the U.S., a full seven-in-ten say their friends or relatives have achieved their goals. Meanwhile, 27% know someone who has been deported or detained by the U.S. government for immigration reasons in the past year and three-in-ten know someone who returned to Mexico because they could not find work.

When asked whether it is good that Mexicans emigrate to the U.S., opinions are evenly split. Equal numbers of people say that it is good (44%) for Mexico that its citizens live in the U.S. as say that it is bad (44%). In addition, almost half of all Mexicans (47%) say that moving to the U.S. leads to a better life, compared with only 18% who say it leads to a worse life and 29% who say it is neither better nor worse.

Law and Order a PriorityThe Drug WarGovernment and Military Lauded, Not So Courts and PoliceU.S. Image Continues to Improve