Much of the world cheered the November 6 re-election of U.S. president Barack Obama. But the president’s honeymoon may be short lived. Disappointment with Obama’s first term foreign policy may challenge both his popularity and his ability to present a positive image of the United States around the globe. 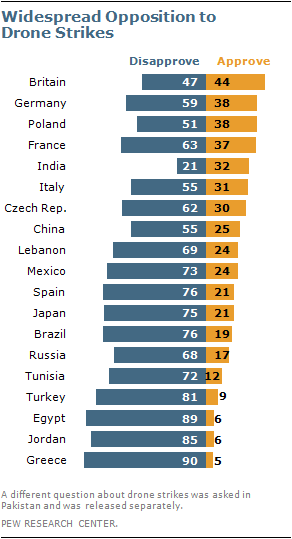 Prior to the election, overwhelming majorities in Western Europe, Japan and Brazil supported Obama’s reelection. But they were upset with signature elements of his foreign policy. In particular, a survey conducted by the Pew Research Center’s Global Attitudes Project earlier this year found widespread opposition to drone strikes, a cornerstone of the Obama administration’s anti-terrorism policy, and many believe the president hasn’t sought international approval before using military force, as they expected he would when he first took office. In addition, publics around the globe say Obama failed to meet their expectations that he would tackle climate change and take an even-handed approach to the Israel-Palestinian conflict.

Four years ago, Obama came to office with the world behind him, reversing a decade-long trend of negative opinions of the U.S. Between 2008 and 2009, the percentage of Germans, French, Spanish and Indonesians expressing positive views of the U.S. increased by at least 25 percentage points, and double-digit increases were also evident in Mexico, Argentina, Brazil, Britain, India and Nigeria. Even in some Muslim countries, where Obama has never enjoyed broad popularity, the image of the U.S. saw modest improvements in Jordan, Egypt and Lebanon when Obama was first elected.

But clouds loom on the horizon, as overall approval of Obama’s international policies and confidence in the American president have declined around the globe since 2009. Among Obama’s biggest problems is his administration’s drone campaign against extremist leaders and organizations. Majorities in virtually every country surveyed in 2012 oppose this policy, which is a key component of American anti-terrorism efforts. Opposition is especially prevalent in Muslim countries – at least eight-in-ten in Egypt, Jordan and Turkey are against drone strikes – but about three-quarters in Spain, Japan, Mexico and Brazil are also against drones, as are 63% in France and 59% in Germany.

Obama is now confronted with a sense of disappointment over unmet expectations during his first term, especially when it comes to his handling of global climate change, and especially in Western Europe. In 2009, large majorities in France, Germany, Britain and Spain believed Obama would take significant measures to control climate change. By Spring 2012, however, fewer than three-in-ten in these countries said Obama had, in fact, done this. Significant gaps between expectations and evaluations of Obama’s performance on climate change were also evident in Poland, Russia, Turkey, Egypt, Jordan, Pakistan, China, Japan, and Mexico. 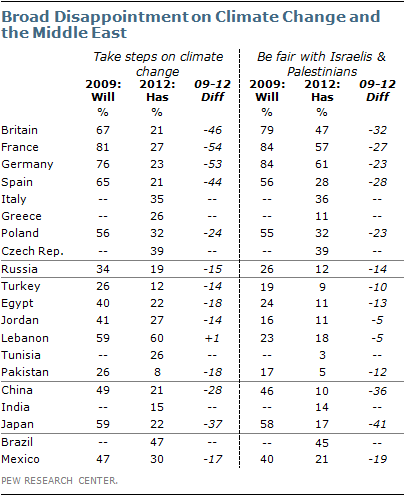 In Western Europe, Obama also failed to meet expectations on his handling of the Israeli-Palestinian conflict. Although 61% in Germany, 57% in France, and nearly half in Britain still believed Obama had been fair in dealing with both sides in the Spring 2012, as many as 79% in each of these three countries said they expected Obama to be even-handed on this issue at the beginning of this first term.

In most of the predominantly Muslim countries surveyed, where expectations that Obama would be fair in dealing with the Israeli-Palestinian conflict were already low in 2009, even fewer said the American president had handled the conflict fairly. For example, after Obama took office, about a quarter of Egyptians believed he would be fair, compared with 11% who said Obama had been fair in 2012. Double-digit gaps between expectations and evaluations were also evident in Turkey and Pakistan.

More generally, many publics around the globe are disappointed with Obama’s approach to foreign affairs. Shortly after Obama took office, majorities in Britain, France and Germany, and at least four-in-ten in Spain, Poland, Russia, Japan and Mexico, expected Obama to act multilaterally when making international policy decisions. In the Spring 2012 survey, the percentage in these countries that said the president had, in fact, done this had dropped by 14 percentage points or more.

Similarly, in most countries, fewer said Obama had sought international approval before using military force than said they expected him to do so in 2009. Disillusionment with the president on this issue is especially common in Spain, Germany, Egypt and Japan, where the gap between expectations and evaluations is larger than 20 percentage points.

But despite some disappointment with Obama and a decline in the president’s popularity in some parts of the world, large majorities in Western Europe, Japan and Brazil continued to express confidence in the American president to do the right thing in world affairs in the Spring 2012 survey. And America’s image, which had declined dramatically during the Bush presidency, remained largely positive three years into Obama’s tenure.

A reelection is a time for renewal. And Obama has much support from the global community to build upon. Whether he continues to enjoy that good will, however, may hinge on how he approaches issues like drone strikes, climate change and the Israeli-Palestinian conflict and the extent to which he reaches out to the rest of the world in his second term.