The declaration of Mohamed Morsi as Egypt’s first freely elected president marks a major milestone for a country that until February 2011 had spent nearly three decades under the authoritarian rule of Hosni Mubarak. At the same time, for significant numbers of Egyptians, Morsi’s relatively narrow victory over former Prime Minister Ahmed Shafiq has the potential to raise questions about Islam’s role in society. 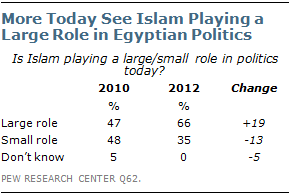 A survey by the Pew Research Center’s Global Attitudes Project in March-April – well before Morsi emerged as a leading candidate in the presidential race, but after Islamist parties had won the majority of seats in the December parliamentary vote – found considerable support for Islam as a guiding force in the country’s future. However, the poll also revealed that not all Egyptians are equally comfortable with Islam’s expanded influence. (See “Egyptians Remain Optimistic, Embrace Democracy and Religion in Political Life,” released May 8, 2012).

Already in early spring, there was broad acknowledgment of Islam’s rising profile, especially in the political arena. Roughly two-thirds (66%) of Egyptians saw Islam playing a big role in national politics, up 19 points from 2010, when just 47% said this was the case. 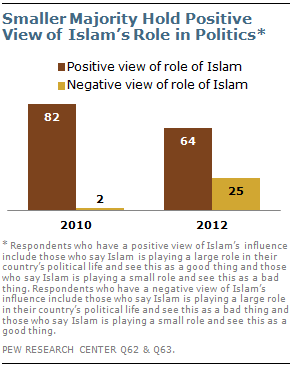 Most Egyptians appeared little troubled by Islam’s new status. When asked whether Saudi Arabia or the more secular Turkey would be a better model for Egypt in terms of religion’s role in government, a 61%-majority answered Saudi Arabia. Only 17% chose Turkey, while 22% claimed neither country was a suitable model.

However, while majorities were attracted to the Saudi model and seemed to welcome Islam’s expanded influence, support for Islam’s role in politics was significantly lower than in 2010, when 82% had seen Islam as a positive force in Egypt’s political life. Meanwhile, the number of people who saw Islam playing a big role in politics and who said this was a bad thing was up 19 percentage points over the same two-year period (20% vs. 1%).

On the question of Egypt’s legal code, the spring survey also found broad support for Islam playing a major role: 60% said the country’s laws should strictly follow the teachings of the Quran, while 32% thought Egyptian laws should broadly reflect the values and principles of Islam. Only 6% of Egyptians embraced the secular view that laws should not be influenced by the Quran. 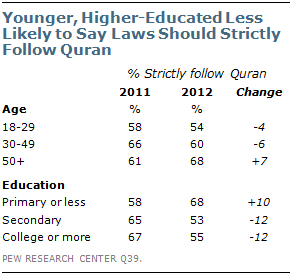 Yet, the survey revealed that not all Egyptians were equally enthusiastic about Islam shaping the country’s legal code. Younger people, in particular, were less likely to believe laws should strictly follow the Quran –about half (54%) expressed this view, compared with 68% among those 50 and older.

Better educated Egyptians, too, were not as eager to endorse Islam as the exclusive foundation of the country’s legal code. Only 55% of those with college degrees backed laws that strictly adhered to the Quran, compared with 68% of those with a primary education or less. Moreover, the number of Egyptians with secondary or college education who supported a strict Quranic basis for the country’s laws was 12 percentage points lower than in 2011.

It remains to be seen whether unease about Islam’s influence in Egypt’s legal and political life will deepen in the months ahead. Much will depend on the ability of president-elect Morsi and other Islamist politicians to convince the public that they are building a future for all citizens. In the meantime, the experiment of integrating Islam and democracy continues in Egypt.