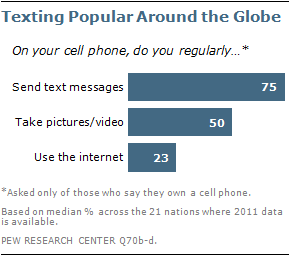 Cell phones are owned by overwhelmingly large majorities of people in most major countries around the world, and they are used for much more than just phone calls. In particular, text messaging is a global phenomenon – across the 21 countries surveyed, a median of 75% of cell phone owners say they text.

Texting is widespread in both wealthy nations and the developing world. In fact, it is most common among cell phone owners in two of the poorest nations surveyed: Indonesia and Kenya.

Many also use their mobile phones to take pictures or video. A median of 50% use their cell phones in this way in the 21 countries polled. Fully 72% of Japanese cell phone owners take pictures or video, as do roughly six-in-ten in Mexico (61%), Spain (59%) and Egypt (58%). Fewer users access the internet via cell phone, although more than four-in-ten mobile phone owners use their device to go online in Israel (47%), Japan (47%) and the United States (43%).

The survey by the Pew Research Center’s Global Attitudes Project, conducted March 21 to May 15, also finds that social networking is popular in many nations around the globe. This is especially true in Israel (53%) and the U.S. (50%), where half or more say they use social networking websites. More than four-in-ten use these sites in Britain (43%), Russia (43%) and Spain (42%).

In nearly every country, the young and the well-educated are especially likely to embrace all of these technologies. People under age 30 and college graduates tend to use their cell phones for more purposes than those in older age groups and those without a college degree, and they are also more likely to use social networking sites.

Many Use Phones for Texting, Pictures 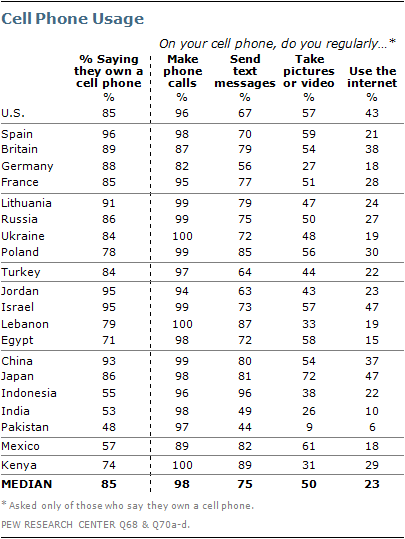 Texting is most common among cell phone owners in Indonesia (96%), Kenya (89%), and Lebanon (87%), with eight-in-ten or more in Poland, Mexico, Japan and China also saying they regularly text.

In Western Europe, seven-in-ten or more say they send text messages on their cell phones, with the notable exception of Germany, where just 56% regularly text. Only in India and Pakistan do less than half (49% and 44%, respectively) of cell phone owners text.

The Japanese are the most likely of the publics surveyed to say they regularly take pictures or video with their cell phones, with 72% using their mobile phones for such purposes. Roughly six-in-ten cell phone owners in Mexico (61%), Spain (59%), and Egypt (58%) use their phones for snapping pictures or shooting video, while this is much less common in Lebanon (33%), Kenya (31%), Germany (27%), and India (26%). Only 9% of Pakistani cell phone owners say they use their devices for taking pictures or video.

In none of the countries surveyed do a majority use their cell phone regularly to access the internet. Still, at least 30% in six countries – Israel, Japan, the U.S., Britain, China and Poland – do go online using their phone.

In most of the countries surveyed, there has been only marginal change in social networking use since 2010. Two notable exceptions are Egypt and Russia – countries where the role of social media in recent political upheaval has been the subject of considerable attention. In both nations, usage has increased by ten percentage points over the past year, from 18% in 2010 to 28% in 2011 in Egypt and from 33% to 43% in Russia.2

The percentage of adults who use social networking sites is determined in part by the prevalence of internet use, which is more broadly connected to a country’s wealth. The scatter plot below shows the positive relationship between GDP per capita (PPP) in the country and the level of social networking. 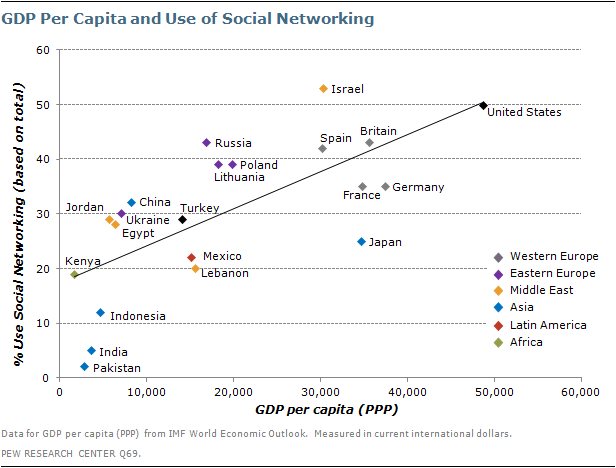 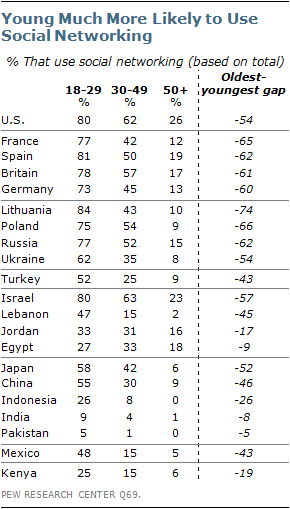 The gap on use of social networking between the oldest and youngest age groups is also large in the U.S., Western and Eastern Europe, Israel, and Japan.

Education level is also a significant factor in social networking usage, though the importance of education varies widely by country. The largest differences between college graduates and those without a college degree are found in Egypt (+71) and China (+51). The education gap is somewhat less pronounced in the U.S. and Western Europe; and it is especially low in Germany (+4) and Britain (+2).

Compared with age and education, gender differences are less common in these measures of technology usage. Nevertheless, there are notable gender gaps in a few countries, including Spain, where 29% of male cell phone owners use their devices to access the internet, compared with 13% of females. In Germany, 26% of men who own a cell phone regularly use it for accessing the internet, while just 11% of women do so. And in Turkey, the gap is 16 percentage points between men (30%) and women (14%).