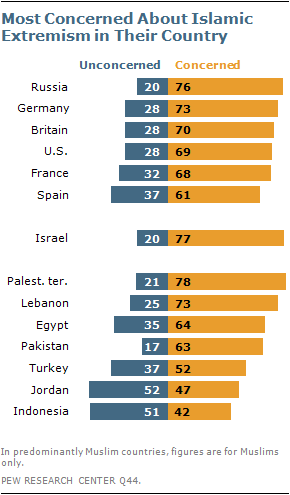 Worries about Islamic extremism are widespread among the nations surveyed, with majorities in the U.S., Russia, Western Europe and Israel as well as among most Muslim publics in the Middle East and Asia expressing concern about the presence of extremists within their borders.

Compared with five years ago, however, worries have subsided somewhat in several countries, including Germany, France, Britain and Spain. The most dramatic drop has occurred among Jordan, where the percentage of Muslims concerned about Islamic extremism has declined by 22 percentage points since 2006.

Among Muslim publics, worries about Islamic extremism largely center on its violent nature. For example, among Muslims in Indonesia and Lebanon who are concerned about extremism, more than half say they are most troubled by the threat of violence. Pluralities in Turkey and Pakistan share this view. In the Palestinian territories and Egypt, the foremost concern among Muslims is that extremism will divide the country, while Jordanian Muslims worry most about the impact extremist agendas might have on personal freedoms.

As in the past, when asked about the September 11, 2001 terrorist attacks on the World Trade Center and Pentagon, small percentages of the Muslim publics surveyed believe these acts were carried out by Arabs. Only about one-in-five or fewer believe Arabs conducted the 9/11 attacks. However, Muslims in Lebanon and Israel are more willing to accept that groups of Arabs perpetrated the attacks, with just over a quarter in each country subscribing to this view. In several countries – Jordan, Egypt and Turkey – the percentage of Muslims believing that Arabs were responsible has actually declined since 2006.

Worries about Islamic extremism remain widespread in the U.S., Russia and Western Europe. At least seven-in-ten in Russia (76%), Germany (73%), Britain (70%) and the U.S. (70%) say they are very or somewhat concerned about extremism in their country; 68% of French and 61% of Spanish respondents express similar concern.

Among the Muslim publics surveyed, those who express concerns about Islamic extremism are primarily worried by the violent nature of extremist movements. In both Lebanon (56%) and Indonesia (55%), majorities of Muslims point to violence as their greatest concern when it comes to Islamic extremism. In Lebanon, pluralities of Christians (49%) and Sunnis (44%) name violence as their primary worry, while nearly seven-in-ten (69%) among the country’s Shia community say the same. 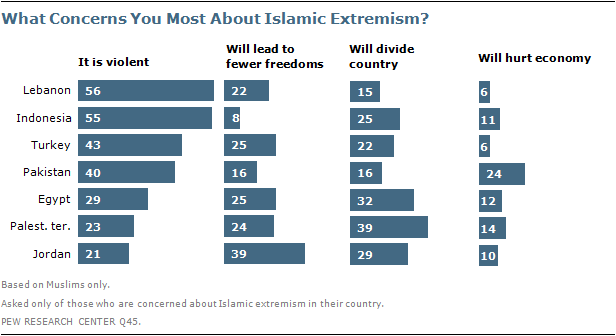 In Egypt, somewhat more among Muslims who are concerned worry that extremism could divide the country (32%) than point to its violent nature (29%); a smaller percentage (25%) is concerned that extremism will lead to fewer freedoms and choices for individuals.

Violence is also not the leading concern in either the Palestinian territories or Jordan. In the former, Muslims worried about Islamic extremism are most exercised (39%) by the possibility that it could divide their country. In Jordan, the threat to personal freedoms is the principal worry (39%) among Muslims concerned about extremism. 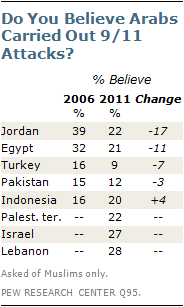 When asked about the September 11, 2001 terrorist attacks on the World Trade Center and Pentagon, few among the Muslim publics surveyed believe these acts were carried out by groups of Arabs. The highest percentage who believe that Arabs were culpable for the 9/11 attacks is found in Lebanon, where 28% of Muslims believe this to be true, with roughly comparable numbers of Sunni (31%) and Shia (26%) agreeing on this point. A similar proportion of Israeli Muslims (27%) also say groups of Arabs conducted the attacks.

In the other predominantly Muslim countries surveyed, fewer than one-in-four Muslims accept that Arabs conducted the attacks on New York and Washington 10 years ago. Pakistanis and Turks are the most skeptical, with just 12% and 9%, respectively, saying that groups of Arabs carried out the 9/11 terrorist acts.

In several of the Muslim nations for which there are trends, skepticism has grown since 2006. Among Jordanians, the percentage of Muslims who believe Arabs were responsible for the terrorist acts has fallen 17 percentage points, compared with five years ago. Over the same period, the percentage of Muslims in Egypt who accept that groups of Arabs carried out the attacks has declined 11 points, while in Turkey it has shrunk by 7 percentage points. In the case of Indonesia and Pakistan, opinions on the matter have changed little since 2006.

Muslim-Western Tensions Persist Chapter 1. The Rift Between Muslims and the West Chapter 2. How Muslims and Westerners View Each Other
Chapter 3. Islamic Extremism
Trends in Extremism ConcernFears of ViolenceViews About 9/11
Survey Methods