The democratic uprisings in Tunisia, Egypt and elsewhere have led to speculation that a wave of pro-democracy movements could spread as far as China. The government in Beijing, for its part, has acted swiftly to quash the possibility of anti-government protests inspired by the Middle East’s popular revolts. How much China’s leadership has to worry about a mass uprising is an open question, as judging the Chinese appetite for democracy is not easy. Unlike in the Arab world, where opinion surveys over the years have demonstrated public support for such basic democratic rights as free elections and freedom of speech, in China it is not possible to ask citizens about their views on democracy. The government won’t allow it. However, on another critical dimension in gauging public enthusiasm for political change — personal and economic satisfaction — surveys do allow for comparisons between Chinese attitudes and those in Arab countries, such as Egypt. Here, the polling suggests China may not be ripe for the kind of uprisings seen throughout the Middle East. 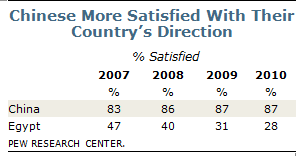 Unlike the Egyptian public in recent years, the Chinese public has been overwhelmingly content with the direction in which their country is headed. In a spring 2010 survey by the Pew Research Center’s Global Attitudes Project, 87% of Chinese said they were satisfied with the way things were going in their country.1 Just 28% of Egyptians said the same, compared with 69% who were dissatisfied with their country’s direction. In both countries these findings were closely linked to views on the economy: 91% of Chinese characterized their country’s economic situation as good, compared with only 20% of Egyptians who said the same. The number of Egyptians describing their country’s economic situation as good fell by more than half, from 53% in 2007. 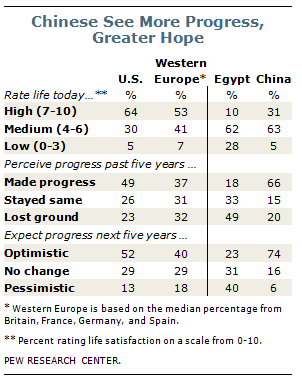 Divergent attitudes on broad issues, such as the economy and direction of the country, point to important contrasts between the public mindset in China and Egypt. That contrast is even starker at a more personal level. In spring 2010, the Pew Global Attitudes survey asked respondents to place themselves on a “ladder of life,” where zero represents the worst possible life and 10 the best possible life. Respondents were also asked to describe where they stood five years ago and where they guessed they would stand five years in the future.

On balance, both Chinese and Egyptians rated their lives much less positively than Western Europeans or Americans. However, three times as many Chinese as Egyptians reported a high level of personal satisfaction.

And while the Egyptian and Chinese publics rated their current lives comparably, Chinese reported much more personal progress over the past five years and much more optimism looking ahead. The prevailing feeling in Egypt was one of losing ground. In fact, between 2007 and 2010, the number of Egyptians reporting a low quality of life doubled, suggesting that in the lead-up to this year’s popular revolt frustrations may have been mounting not only with respect to democratic yearnings, but in terms of personal aspirations.

By contrast, nearly two-thirds of Chinese judged their lives to be better than five years ago. This number out-stripped even the personal progress reported in the U.S. and Western Europe. Fewer than a fifth of Egyptians (18%) registered an improvement in life satisfaction, with nearly half actually reporting a decline in life quality.

The Chinese were decidedly upbeat about the future as well. In spring 2010, 74% believed their lives would be better in five years – an impressive level of optimism compared with opinions in the U.S. and Western Europe. In Egypt, only 23% anticipated a higher quality of life, while 40% predicted a lower quality. In China, just 6% believed their lives would worsen over the next five years.

Arguably, widespread optimism in China could inflate popular expectations, which if unmet could lead to personal or social frustration. So far, China seems to have escaped this scenario. Since 2002, a majority of Chinese have consistently predicted that they would have a better life in five years. This suggests an enduring confidence among most Chinese that their personal aspirations will be met.

It would be wrong to assume that the Chinese public is indifferent to the performance of their national or local governments. In fact, news reports indicate that a good number of Chinese care enough about official corruption and government accountability to voice their concerns online or in other forums. But the Chinese public’s overall state of mind is very distant from the pessimism that helped set the stage for massive protests in Egypt. Confident that their country is on the right path, and optimistic that their own lives will improve, the Chinese public might not be so likely to embrace a Jasmine-style revolution.