The environment is a major issue in every nation surveyed, with at least half in all countries considering global climate change a serious or very serious problem. But the intensity of that concern varies widely, and divides along ideological lines in the U.S. and across the Atlantic. A majority of respondents in most countries feel that protecting the environment should be made a priority, even if doing so results in job loss or less economic growth. But that support has eroded somewhat over the last three years during the global recession. International publics are more ambivalent about individual sacrifice to protect the environment. In less than a third of the countries do majorities agree that people should be willing to pay higher prices in order to address global climate change. 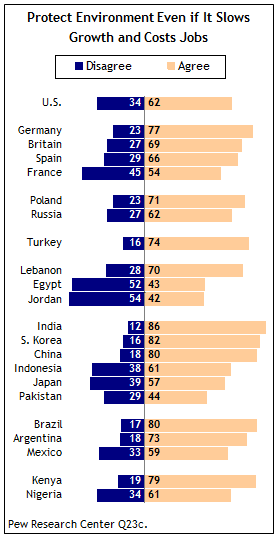 In 19 of 22 nations, majorities believe that protecting the environment should be given priority, even if it results in slower economic growth and loss of jobs.

Some 62% of U.S. respondents feel that efforts to protect the environment should be made, even if doing so slows growth and leads to the disappearance of some jobs.

Of those nations surveyed, Jordan (42%), Egypt (43%) and Pakistan (44%) are the least likely to agree that the environment should be protected, despite the potential cost. 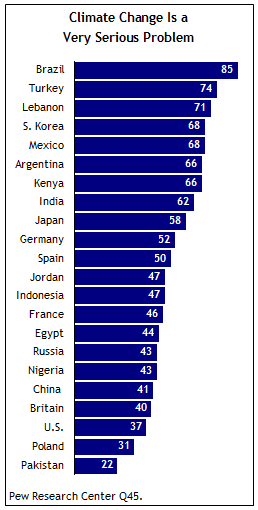 In most countries – again 19 of the 22 surveyed – at least three-quarters of the population perceive global climate change as a serious or very serious problem. But publics differ in just how much they are worried.

The U.S. and China, the world’s two greatest emitters of carbon dioxide, are relatively less troubled by global warming, with only 37% of Americans and 41% of Chinese saying it is a very serious challenge. The lowest intensity of concern is in Pakistan (22%) and Poland (31%). 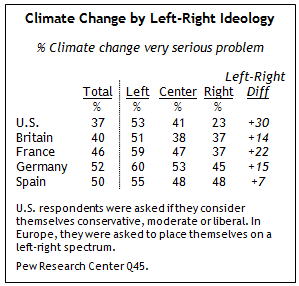 Intensity of views about climate change divide along partisan lines in the U.S. Over half of Democrats (56%) say it is a very serious problem. And nearly a third of independents (32%) agree. But only 18% of Republicans are this concerned. More than one-in-four Republicans (28%) think climate change is not a problem at all, while only 3% of Democrats hold this view.

In Western Europe, as in the U.S., people who identify themselves as being on the political left are more likely than those on the right to be very concerned about climate change, with left-wing Germans the most concerned. The greatest ideological rift is in the U.S., where a 30-percentage-point gap exists between conservatives and liberals. Conservative Europeans are far more concerned about climate change than are conservative Americans.

The overall high level of concern about this issue around the world is consistent with previous Pew Global Attitudes research. In 2009, when asked about global warming, majorities in all 25 nations included in that survey rated this issue a serious concern.6

Nonetheless, the intensity of sentiment has declined notably in several countries over the last few years, especially in relatively wealthy nations such as Japan, where 78% were very worried in 2007, compared with 58% now. Similarly, 70% said they were very concerned in Spain three years ago, while just 50% feel this way today.

On the other hand, concerns have grown in several developing nations over the last few years. This is especially true in Lebanon, where 41% were very worried in 2007, compared with 71% in 2010.

Despite the general consensus that the environment should be protected, even to the detriment of economic growth, publics are divided about whether individuals should pay higher prices specifically to address climate change. In only seven of the 22 countries surveyed do majorities think consumers should pay more to slow atmospheric warming.

Even though the Chinese are less likely than most other publics to consider global warming a very serious problem, they are by far the most willing (91%) to see prices rise to cope with this challenge. Indians (73%) and South Koreans (71%) agree. In comparison, Jordanians (21%), Pakistanis (20%) and Egyptians (20%) are the least willing pay more.

Among Americans, the majority (58%) do not believe that people should be willing to pay more of the bill to cope with climate change. Only 38% of Americans are willing to ante up more. In this sentiment, people in the U.S. are out of step with the world. In most of the countries surveyed people are more likely than Americans to be willing to pay for efforts to slow global warming.

However, willingness to pay more to deal with climate change fell in Pakistan (16 percentage points), France (12 points), and Nigeria (10 points) between 2009 and 2010.

Next: Chapter 9. Other Findings
← Prev Page
Page1Page2Page3Page4Page5Page6Page7Page8You are reading page9Page10Page11
Next Page →