Publics worldwide continue to have more confidence in U.S. President Barack Obama’s ability to handle world affairs than in the abilities of key European leaders. Even German Chancellor Angela Merkel, whose leadership skills are well-regarded by publics throughout much of Western Europe, does not match Obama’s popularity. In contrast to Merkel, French President Nicolas Sarkozy and Russian President Dmitri Medvedev receive lower ratings among European Union member states. In other parts of the world the three European leaders garner even less support, in part because large portions of the publics surveyed venture no opinion about them. Notably, Merkel and Sarkozy, leaders of two major members of the EU, are held in particularly low regard by Turks, who are engaged in a prolonged effort to join the EU. 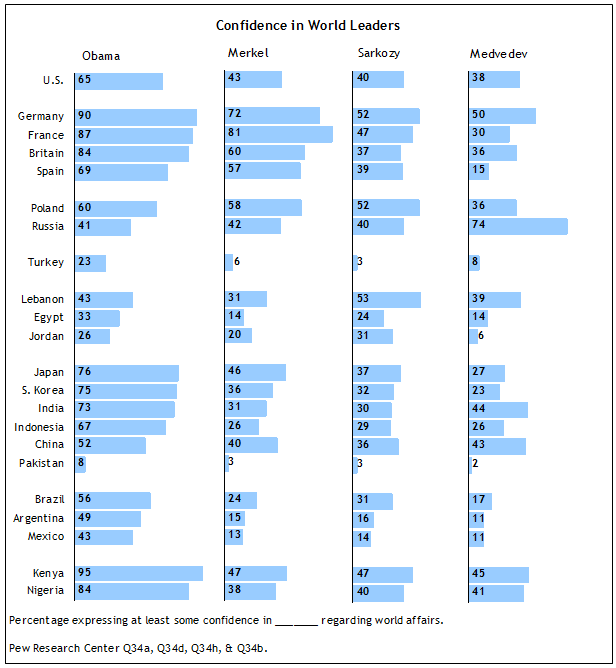 Majorities in all five EU countries included in the survey have confidence in German Chancellor Merkel to do the right thing regarding world affairs. Outside of the European Union, confidence in Merkel is less common, and many are unfamiliar with the German leader.

Confidence in Merkel is most widespread in France, where she is even more popular than she is at home and more popular than French President Sarkozy. About eight-in-ten French (81%) have confidence in the chancellor to do the right thing in international affairs. A large majority (72%) in Merkel’s home country hold the same view. In Britain, 60% express confidence in Merkel, up from roughly half (51%) the previous year. Similarly, 57% in Spain voice positive opinions about Merkel’s leadership on foreign affairs, a modest improvement since 2009 (49%). More striking is the improvement in Polish views of Merkel; 58% voice a favorable view this year, compared with 39% last year.

Pluralities in Japan (46%), the U.S. (43%) and China (40%) have confidence in the German leader, although in all three nations many do not offer an opinion. 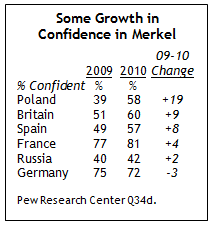 Negative views of Merkel are far more common in the Middle East. Seven-in-ten in Egypt have little or no confidence in the chancellor to do the right thing in world affairs. Roughly six-in-ten hold the same negative views in Jordan (64%) and Lebanon (61%).

Turks also remain unconvinced of Merkel’s foreign policy leadership skills. As in past surveys, a large majority in Turkey (69%) currently have little or no confidence in the chancellor’s international decisions, while only a few say the opposite (6%). Many Turks (25%) do not offer an opinion of the German leader.

Elsewhere around the world, many offer no opinion about Merkel. Roughly four-in-ten or more in Indonesia (39%), India (46%), Mexico (53%), Argentina (62%) and Pakistan (65%) said they could not assess her ability to handle world affairs.

Publics in European Union countries express far less confidence in French President Sarkozy than in German Chancellor Merkel. Germany and Poland are the only European Union countries surveyed in which a majority – albeit a slim one – expresses confidence in Sarkozy to do the right thing in world affairs; 52% in both nations have a positive view of him.

In France, fewer people have confidence (47%) in their president than do not (53%). Just one year earlier, positive views of Sarkozy (53%) outranked negative ones (47%). Favorable views of the French president are even less common in Britain (37%) and Spain (39%).

Four-in-ten in Russia and the U.S. have confidence in Sarkozy’s global leadership, and many in both countries do not offer an opinion.

A majority in only one of the three Middle Eastern publics surveyed has faith in Sarkozy’s foreign policy leadership skills. More than half of Lebanese (53%) trust the French president to do the right thing in world affairs. In contrast, seven-in-ten in Egypt (70%) and 63% in Jordan have little or no confidence in the French leader.

As in past surveys in Turkey, 71% currently have little or no confidence in Sarkozy’s handling of foreign affairs, while only a few (3%) have a positive view. Many Turks (26%) do not offer an opinion. Even larger proportions in Pakistan (65%), Mexico (49%), Argentina (48%), India (47%), and Indonesia (36%) express no view of the French president.

Confidence in Russian President Medvedev to do the right thing in world affairs is limited, although the assessment is more positive than last year.

Positive views of Medvedev have become more common in all five EU member states surveyed. In Poland, confidence in the Russian president has more than doubled in the last year, rising from 17% to 36%. Germans give Medvedev his highest marks among the EU nations polled – half now express confidence in him, up 18 percentage points from 2009. Significant increases have also taken place in France (+13 percentage points), Britain (+9 points) and Spain (+6 points).

In Turkey, negative assessments of Medvedev continue to prevail; 69% say they lack confidence in Medvedev, up slightly from 2009 (64%). Many Turks say they are unfamiliar with the Russian leader.

Similarly, negative views of President Medvedev are widespread among the Middle Eastern publics surveyed. A large majority in Jordan (82%) have no confidence in the Russian leader’s ability to handle world affairs, an increase from the previous year (73%). Similarly, 73% of Egyptians are critical of Medvedev, while in Lebanon 55% hold the same negative view. 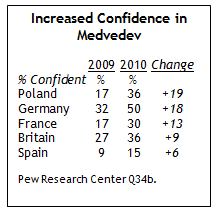 In only five countries outside of Russia are ratings of Medvedev more positive than negative. Pluralities in Kenya (45%), India (44%), China (43%), Nigeria (41%) and the U.S. (38%) express confidence in his ability to handle foreign policy. American opinions of Medvedev have grown more positive since last year, when 30% expressed confidence in him. Many in Argentina (62%), Pakistan (59%), Mexico (52%), India (39%) and Indonesia (35%) offer no opinion of the Russian leader. 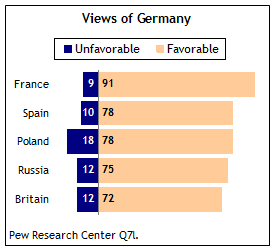 Amidst the recent chaos of the Greek debt crisis and negative German reaction to bail-outs of other European countries, European and Russian public views of Germany remain resolutely favorable. 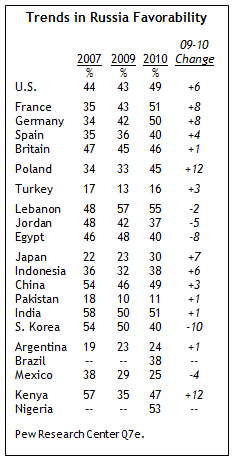 Overall, majorities or pluralities in 9 of 21 countries outside of Russia hold a favorable view of Russia. There have been some significant improvements in Russia’s image since last year, especially among EU member states and in the U.S. About half in France (51%) and Germany (50%) now express a favorable opinion of Russia, an increase of eight percentage points in both nations. An even larger rise has occurred in Poland, where 45% have a positive view, compared with just 33% in 2009. Favorable views have also become more common in the U.S. (+6 percentage points) and Spain (+4 points).

In contrast to trends in some parts of Europe and the U.S., Turkish views of Russia remain negative. As in previous years, more than six-in-ten (65%) Turks currently express an unfavorable view of Russia.

Negative views of Russia tend to predominate in Asia. A majority of Japanese (60%) express unfavorable views of Russia, although that figure is down from 68% in 2009. In Indonesia, 44% voice negative opinions of Russia. Similarly, 45% of South Koreans are critical of Russia, up from 35% the previous year. In contrast, half of Indians (51%) and a plurality of Chinese (49%) hold a positive opinion of Russia.

In Africa, favorable views of Russia outnumber negative ones. A majority of Nigerians (53%) hold a positive opinion of Russia. Similarly, in Kenya 47% express a positive view, up from 35% the previous year.

Views of the European Union

Views of the European Union have changed little in the last year, at least among the EU member states surveyed. Elsewhere, the EU’s popularity has also remained steady or grown. Majorities or pluralities in 17 of the 22 countries surveyed have a favorable view of the EU. However, majorities in Jordan (67%), Turkey (57%) and Egypt (55%) express a negative view of the EU.

Support for the Brussels-based institution is widespread among the five EU member countries included in the survey. Overwhelming majorities in Poland (81%) and Spain (77%) express favorable opinions of the EU. More than six-in-ten hold the same view in France (64%) and Germany (62%). Given past trends, it is not surprising that British enthusiasm for the EU is more muted; only 49% voice a positive opinion. British favorability ratings of the EU have hovered around 50% since 2004.

A large majority of Russians (69%) hold favorable views of the EU. In Asia, enthusiasm for the EU is widespread and has improved since last year. Majorities in South Korea (75%), Japan (73%) and Indonesia (58%), and a plurality in China (47%) express a favorable attitude toward the EU. The EU is more popular now than in 2009 in Japan and China. In contrast, pluralities in Pakistan (45%) and India (38%) hold unfavorable views of the EU, though many do not offer an opinion of this European institution in either country.

Strong majorities in Kenya (80%) and Nigeria (67%) see the EU in a positive light. Moreover, positive views of the EU are far more common now in Kenya than last year (+18 percentage points).

Turkey and the European Union 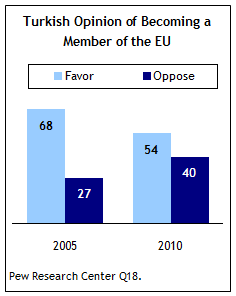 Turkey has long hoped to join the EU, but Turkish public sentiment toward the Brussels-based institution remains decidedly unenthusiastic. Currently, only 28% of Turks hold a positive view of the EU, a slight improvement from 2009 (22%) but still down substantially from 2004 (58% favorable). 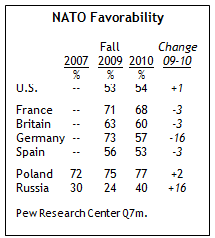 NATO is viewed positively by majorities in the U.S., Poland, and Western European member states. However, NATO is much less popular among Germans than in the past.

Enthusiasm for NATO is most widespread in Poland – the newest member of the Alliance polled; 77% express a favorable view of this security organization.

NATO also remains popular elsewhere in Europe, as well as in the U.S. Majorities in France (68%), Britain (60%), and Spain (53%) hold positive views of the body. A majority in Germany (57%) also offers favorable opinions of NATO, although this represents a substantial decrease in positive views from fall 2009 (73%).

Germans who support removing troops from Afghanistan are less likely to hold a favorable view of NATO (45%) than those who want to keep troops there (76%). Consistent with past surveys, more than twice as many Americans favor NATO (54%) as view it negatively (21%).

Opinions of NATO are improving in Russia – the only non-member state where this question was asked. Currently, Russian views of this Western security organization are evenly split; 40% express a favorable opinion while 40% view NATO unfavorably. In the fall of 2009, only 24% of Russians held a positive view of NATO while 58% voiced a negative one.

Next: Chapter 7. Attitudes Toward Extremism Among Muslim Publics
← Prev Page
Page1Page2Page3Page4Page5Page6You are reading page7Page8Page9Page10Page11
Next Page →